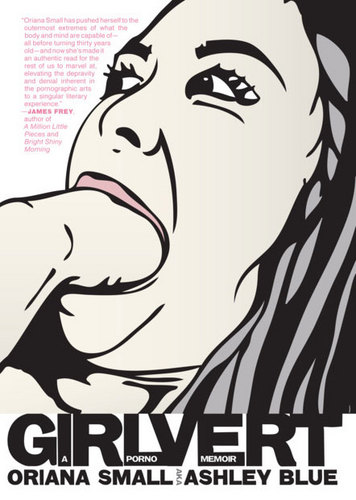 This is the first book I’ve read that I had to set down because it caused me to have a heaving fit (on two separate occasions, actually). As in, certain muscle groups in my body involuntarily contracted in a desperate attempt to push something that I had read out of my throat. Those were just about the only times I was able to set the book down. Oriana Small really puts it all out there: the good, the bad, and the cheese dick*, letting readers do what they might with the information presented. It’s dark and it’s honest and you’ll never once hear Small refer to any part of her own anatomy as a “ding-ding.”

His voice sounds like a banjo being picked. Every one of his sentences contains a double negative and he rambles nonstop. He isn’t a mean guy, but fucking him is a form of punishment. […] He seemed inbred. You’ve got to hand it to those inbreeders: They had big dicks. Otherwise, there was nothing appealing about him. He weighed only ninety-five pounds. I felt like a fat toad getting on top of him. His whole body felt encased in my crack as soon as I lowered myself onto his cock.

Girlvert caused me to do a lot of thinking. It’s the kind of book that you desperately want to talk about. There were parts that were close to home, and parts that resonated with things I’d already been thinking about. One such thing was something that Bubbles wrote recently, that there’s “no better crash course in boundaries and assertiveness” than sex work. The hardest parts of Girlvert for me to stomach were the situations where she is completely pushed beyond her boundaries. And by “boundaries,” we’re talking being alive was a boundary that got crossed at one point when a sociopathic director chokes her to the point of unconsciousness.

I love Oriana Small for the way that she writes about these situations. She manages to share the violation, betrayal, regret, and shame without making herself a victim or condemning the industry as a whole in an attempt to comfort herself. Obviously we’ve had very different paths, but I do know what it feels like to be a 20-year-old with no self-esteem trying to navigate the sex industry. (As much as I hate to admit it, I still have encounters that leave me wishing I had handled things differently.) Any time someone is exchanging her sexual labor for compensation, cost-benefit-type analysis is required to make choices, and we aren’t always able—for whatever reasons—to make the right ones.

There is very little self-pity in Girlvert. In fact, Small never shies away from painting herself in an unflattering light. The men in her succession of boyfriends may be assholes, but she doesn’t hold back from letting the readers know that she was kind of a brat. But she’s a smart brat who is so fucked up and vulnerable that she’s hard to dislike. Her ability to write about traumatic events so matter-of-factly and with humor is part of why I am disappointed that she didn’t devote at least a little more of the book to, well, anything else besides her abusive boyfriends.

You do get the sense that she is a well-adjusted happy adult these days. I don’t think that she would be capable of such unabashed openness if she weren’t. Throughout the book, you can hear the humility and gratitude in her voice: for being in the right place at the right time, for not having contracted HIV when her contemporaries did, for longevity in an industry where women are usually more expendable. It does seem like she has found closure, which is great, except that she doesn’t share that closure with the reader. She spends 296 pages partying heavily and sobers up 5 pages before the end of the book, 8 if you count the epilogue. And-then-I-met-a-decent-guy-and-grew-up-The-End feels more clichéd than any other part of Girlvert, not because I doubt her, but because it’s so disjointed.

All the debauchery followed by a hasty mention of sobriety feels a little like being at an AA meeting, honestly. The book doesn’t necessarily need to have an agenda, but the process of working on her shit and forming a healthy relationship (that led to her marriage with Dave Naz) shouldn’t be reduced to an afterthought. In the way that Melissa Febos redeems herself and proves to readers that she is no longer a jerky heroin-addict in the last third of Whip Smart, I would have liked Girlvert to offer more post-hot mess analysis. I do love that she deals with her back taxes as a way to finally take a hard look at her life. I would interpret the parting message of this book as a) give your love to someone who is worthy of it, and b) pay your damn taxes. Words to the wise.