TITS AND SASS SERVICE JOURNALISM BY AND FOR SEX WORKERS
Home Strippers Smell Ya Later: Pheromone Perfume in the Strip Club 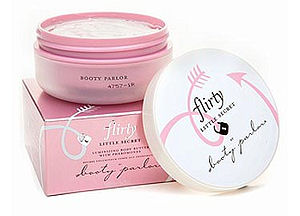 Catherine: Times were tough in Las Vegas this summer. Las Vegas used to be mecca for California girls, this magical promised land where money would just materialize no matter how slow things were at home. Not so true any more, and on a recent business trip I actually found myself worried I wouldn’t break even.

I was browsing the lingerie boutique at the Hard Rock Hotel, looking for something new to wear, when I came across a jar of “Flirty Little Secret: A Luminizing Body Butter with Pheromones.” I had never heard of pheromone lotion before, and as far as I knew, people still weren’t really even sure human pheromones existed. The idea kind of grossed me out—whose pheromones would I smell like, exactly? How do you capture, process and re-market human chemical secretions? Or were they totally synthetic? Or was it all bullshit?

I figured if a $25 jar of lotion had any chance of increasing my earnings, it was worth a shot.

The flavor was officially “blackberry honey,” but it smelled like rancid milk blended with cotton candy and maybe strawberry frosting. Sweet, sour and chemical-ish. Can’t say I was into it, but it left a subtle, pretty sparkle on my skin.

I tested it during the day shift at the Spearmint Rhino. I was actually a little self-conscious about the sour smell, so I layered it with my go-to stripper perfume. (In case you’re wondering, it’s LaVanila vanilla grapefruit.)

The first guy I talked to that day was a 25-year-old British guy who was in town with his his friends for the week. I usually don’t talk to guys younger than me, partially because I wonder if they’d prefer a stripper younger than them, but mostly because I assume they’re broke. He was one of the only guys in the room who wasn’t already a verified loser/timewaster, so I decided to try my luck.

After a few minutes of hanging out and talking with him, he actually told me I smelled good. I was secretly delighted that my experiment had worked, until he clarified, “You smell like vanilla.” So I guess it was the perfume that got him, unless my pheromones were acting more subtly on his senses as well. We went to the VIP room and he spent about $200 on me. Thinking I had nearly dried him out, I thanked him and took a little cruise around the room. I was pretty satisfied with myself and my little secret weapon. If it went over so well on a 25-year-old out partying with his buddies, I was sure it would work wonders on older, richer, more desperate types as well.

But by the time I passed his table again, another chick had already swooped in. She was older than me, spent a good couple hours by his side, and I’m pretty sure she made at least twice off of him what I did. I tried my pheromone lotion again a couple more times during the week, both with and without LaVanila on top. Money still sucked!

Bottom line: There’s quite a lot to be said for a placebo effect, so if you can rub something on your skin and believe it’s bestowed you with seductive superpower, might as well go for it. Some other strippers told me they were into the smell, too, so maybe it doesn’t smell bad to most people. But perhaps the more valuable lessons to be learned here: don’t assume all young guys are broke. Plenty of them have trust funds. Second, don’t bother with Las Vegas in the summer. It’s low season for both tourism and conventions. It’s also really fucking hot.

Kat: My perfume, Human Euphoria (for women), was about as effective for my sales as this Cinemax-style video is at making you want to buy Human Euphoria perfume. I didn’t see this video before I ordered the stuff because I just went with one of the cheapest options on Amazon. I appreciated the sterile, scientific-sounding name. Have no human contact in your sad life? Human Euphoria can help you. If you are displeasing to the eyes, consider the nose!

I actually had high hopes because I’ve seen how well synthetic feline facial pheromones work on my cat. Surely if I can purchase a plug-in or a collar that makes my cat act like a totally different nice cat, then I can buy some perfume that turns men on. It doesn’t take a lot to turn a man on.

In fact, it takes a lot to turn a man off. The restrooms were recently remodeled at my club. Part of this process meant that they removed the men’s room toilet but didn’t have time to put it back before business hours. Not only did male patrons not have the option of going number two (fine by me), but the connection to the sewer was like, exposed. There was some sort of makeshift cover over it, but that didn’t stop the smell. God, the smell. The dance area was filled with a stench that was roughly 20% fish and 80% E. coli. And yet, this did not deter lots of men from buying lots of dances. It was an unusually busy weeknight.

The strippers would commiserate, pausing to breath through our mouths, all of us with the same idea of jumping ship and going home. The manager even agreed to waive all stage fees if the smell wasn’t gone by the following shift. It was the kind of smell that alerts the brain to command the body to immediately evacuate the area in order to continue living. It was like these guys would buy lapdances in the middle of a fire. If the human male can still maintain an erection while surrounded by obvious signs of danger, then maybe he’ll really respond to a smell that has been specially formulated to stimulate him.

When I caught whiff of that first spritz of Human Euphoria, I thought to myself that it smelled a lot like a certain unisex fragrance that took the world by storm in 1994: Ck One. Except, it smelled a little more like something I used to get at the drugstore in 1995: U (“Like Calvin Klein’s© Ck One©? You’ll love our U”). It comes in an aluminum bottle exactly like the packaging of The Gap’s fragrances in the nineties. There was an undertone of something else. It reminded me of my grandma’s house. It was the unmistakable smell of ammonia.

“Okay, so it smells like U and urea,” I said to myself. I didn’t think that was necessarily a dealbreaker. I got in my car to run some errands. I imagined men insisting I go before them in line, cashiers refusing to charge me, and the rest of the plot of Love Potion No 9. What I got was nausea. I had to roll all my windows down. I had been snacking on chips but whenever I would raise a chip to my mouth, bringing my wrist closer to my face, my palate was destroyed. I tried to focus on driving and not the oppression of my senses.

Despite this unpleasant first impression, I powered-through with Human Euphoria at work. It sort of gave me the sensation that I was wearing clothes borrowed from someone else. Initially, I felt like I owed an apology to those around me for subjecting them to my experiment. “Why are you wearing that stuff if you don’t even like it?” asked a coworker.

I didn’t feel like explaining that it was for a blog. “I’m just going to wear it for a week and see what happens.”

“Fuck that. You should give it away to someone who likes the smell of citrus and urine.”

I asked the manager to sniff my wrist, feeling like I was telling him to smell my finger. He answered that it smelled “nice.” I couldn’t believe that he didn’t recoil and ask what was with the animal pee. I got used to the smell and ended up wearing the stuff for several weeks just for the hell of it. At first I thought that I noticed a correlation between when the smell had worn off and when I sold more dances, but I realized that was most likely because customers are drunker at the end of the night. Then I had some great shifts and believed it was my secret stinky weapon. Ultimately, I decided that it had little bearing on my earnings in a given shift. I received compliments (“You just smell so… sexy!”), but no more than when customers are only praising my hair conditioner and Queen Helene cocoa butter.

Bottom line: I think you get what you pay for with pheromone perfume. You should make sure the fragrance accompanying the pheromones doesn’t smell like a cheap knockoff. The only thing this stuff seems to be good for is a placebo effect, but that alone can be worthwhile in a strip club setting. You might be better off just not using deodorant and wearing an amulet that you believe has magic powers.