TITS AND SASS SERVICE JOURNALISM BY AND FOR SEX WORKERS
Home Movies Sin City (2005) and Sin City: A Dame To Kill For (2014) 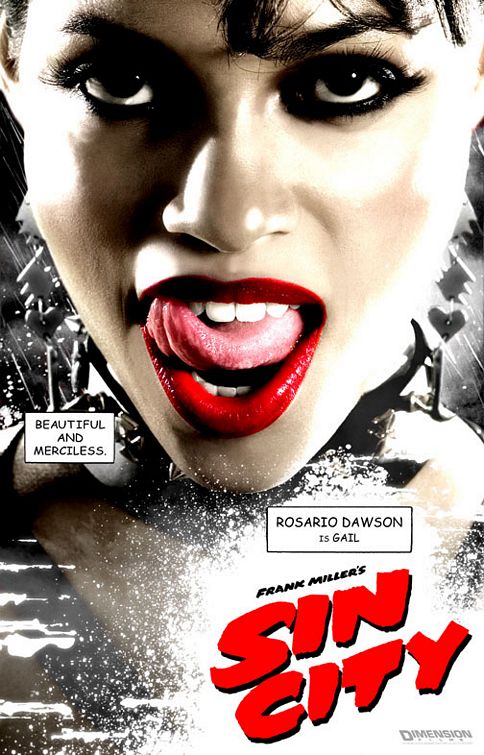 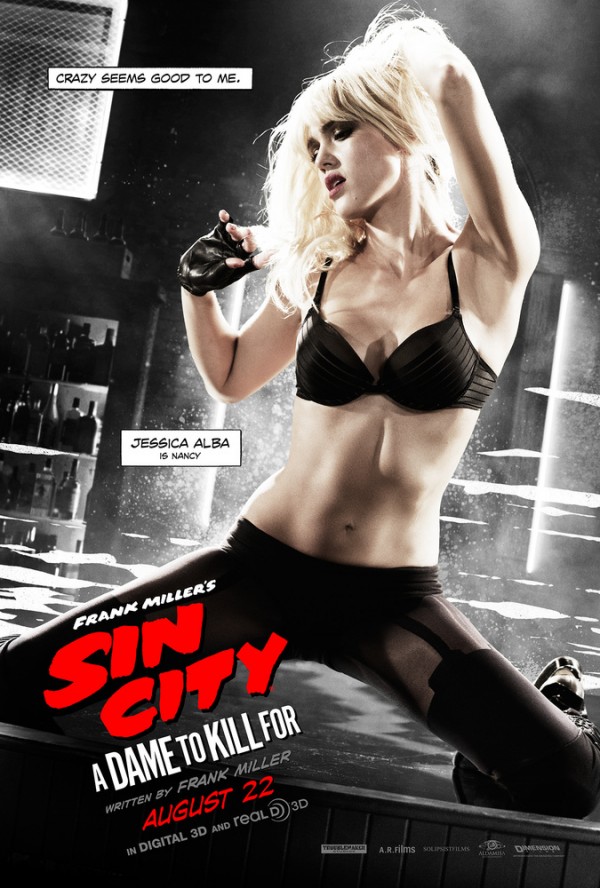 Miller has frequently been described as a misogynist for the way he writes his female characters. This is true for the most part; the films are misogynistic for a variety of reasons. Oddly, one way critics have supported this assertion is by citing that Miller often makes his female characters sex workers. Because, apparently, if one of your female characters is a street worker or a stripper, you must hate women. (Does that mean if she’s a dentist or a farmer you love women?). I’m not sure how that makes sense, so if a feminist film critic is reading this, feel free to explain in the comments.

To be clear, the sex workers in both films are completely stereotypical, unoriginal archetypes. Think damsels in distress and black widows, but with less clothing. The characters are so cliched, in fact, that one would assume they’re meant to pay homage to their noir predecessors. Nancy (Jessica Alba) is a stripper with a raging case of Daddy Issues. Goldie and Wendy (Jamie King) are twin street workers; one of them ends up dead by the hands of a cannibalistic serial killer. Gail (Rosario Dawson) is my favorite— a street worker-dominatrix who is the unspoken leader of the sex workers that police Old Town, Sin City’s red light district. Miho (Devon Aoki/Jamie Chung) is a part of Gail’s entourage; she’s an unapologetic assassin. Becky (Alexis Bledel [Rory Gilmore!]) is a young, childlike street worker who ultimately double-crosses the women working in Old Town.

The films’ palettes are intentionally stylistic, only black and white with a rare splash of color for emphasis. They reminded me of the way my mind animates a graphic novel as I read it. They are formatted in a series of vignettes. Each vignette details a different character’s independent story and is narrated by the story’s protagonist.

Goldie’s storyline was the most problematic. She’s a beautiful escort who spends a whirlwind night with Marv (Mickey Rourke), a binge-drinking Captain Save-A-Ho with serious anger control issues. In the morning, he finds her dead. Guess who killed her? A prenaturally strong serial killer named Kevin (Elijah Wood); he’s got the heads of sex working women mounted across the walls of his hideout. Goldie’s death seemed like the sex workers’ version of Women in Refrigerators Syndrome, the comic book trope in which female characters are swiftly killed off for the sake of their male counterpart’s character development. Marv doesn’t have a great reputation in Sin City, and he looks pretty guilty already. But he loved Goldie, possibly because she’s the only woman that ever touched him, and vows to find her killer. With the help of her twin, Marv finds Kevin and, of course, avenges Goldie’s death. He ends up dead later.

The most delightful scenes of both films occur in Old Town, the red light district of Sin City. Old Town is the street workers’ version of the Wire’s Hamsterdam: the cops stay out, and the sex workers are in charge. And they have an honor code: Do not fuck with the sex workers of Old Town lest you be tortured and dismembered. Gail functions as the den mother of Old Town. A lithe Rosario Dawson brings an irresistible fire to her character, merging cockiness with acumen. When babyfaced Becky is threatened street-side by Jackie Boy, a no good would-be pimp, Gail sends sex working assassin Miho to slaughter him. They teach Jackie Boy the rules: do not fuck with the sex workers of Old Town. But wait—Jackie Boy’s killing was a set up of epic proportion that will ultimately compromise the security the sex workers have created in Old Town. No big deal though, they got this. What follows is a literal bloodbath of sex workers gone militant. They have guns. And swords. It’s  magical. Is Old Town an allegory for decriminalization? Probably not, but we wouldn’t have to worry about hordes of murderous sex workers running the streets if the work were legal. Just saying.

The Old Town workers play a pivotal role in the second film as well. Gail and Miho help storm Ava Lord’s (Eva Green) mansion to kill mob boss Wallenquist (Stacey Keach). Miho has some show stealing scenes in the second film. It’s unfortunate that Miho doesn’t ever speak in either films. We’re only allowed a small yet vital glimpse into her backstory. Her presence in both films was commanding; she deserved a more fleshed out examination.

Nancy’s storyline is the most ridiculous, even accounting for the absurd plot contortions that always litter the noir genre. As a small child, Nancy was kidnapped by Senator Roark (Powers Booth) at the behest of his nephew, Roark Junior (Nick Stahl). Roark Junior is a sadistic pedophile who has some gross, rapey plans for Nancy. Luckily, Detective John Hardigan (Bruce Willis)—the last uncorrupted cop on the force—rescues her. His rescue attempt involves maiming Roark Junior in a satisfying act of brutality: He gets de-dicked. The bad news: Hardigan is framed and sent to prison. By the time he’s released, our precious Nancy is all grown up. She’s the most popular exotic dancer at Sin City’s strip club. I’m certain the writers did not mind finding a reason to give Jessica Alba a pair of chaps and a lasso. Nancy has been waiting her entire adult life for Hardigan’s release because, apparently, she fell in luuurrrvv with him somehow (Holy Daddy Issues, Batman!). It doesn’t take long for her to get kidnapped again by the Roarks after the two are reunited. Don’t worry though, Hardigan saves her. But he ends up dead too.

In the second film Nancy has become bitter and unhinged. She’s definitely not adhering to the sad stripper trope; she’s very angry. Nancy starts drinking, which leads to an unhealthy fixation, which leads to insanity, which leads to a sweet revenge story. Nancy’s officially done with men, and done with dancing. She’s cracking, but that’s ok because a diagnosis of “crazy” is an industry exit plan which actually seems logical in the Sin City universe. Spoiler! Nancy kills the films’ worst bad guy.

My feelings about the sex workers’ depictions in Sin City and Sin City: A Dame to Kill For are conflicted. While the movies’ predictable characterization of sex workers are relentlessly sexist, they’re not whorephobic. The protagonists never shame the sex workers, or encourage them to find new work, or seem threatened by what they do. One curious observation I made is that every man that attempts to “rescue” a sex worker inevitably ends up dead. Still, the films’ portrayal of sex work isn’t subversive; many of the same old sex worker tropes are simply rehashed with slicker packaging.

The sex workers play a larger role in the first film than the second, but their roles are essential in both.  It’s unfortunate that their storylines are so dependent on the men. A sex worker-specific vignette would serve the Sin City franchise well. They’re beautiful women that are so much fun to watch. Allowing them comprehensive, dynamic personalities would have made their adventures that much more compelling. If you absolutely can’t stomach worn-out sex worker clichés filtered through the male gaze, then skip these movies. But if some armed and dangerous sex workers sound like a lot of fun to you, then these films are definitely worth exploring.