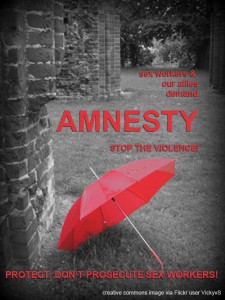 If you are a sex worker or an ally of sex workers, please contact the office of the Suffolk County Police Commissioner and District Attorney and make this request. We especially need people who live in the New York City / Long Island area, especially Suffolk county, to make calls and send emails. In your request, you can feel free to personalize with information about your experiences or feelings about these cases.

I am a sex worker / ally to sex workers who lives in Suffolk County / the greater New York City area and I am writing to express concerns my community has about the lack of protection police are offering to sex workers. During this time of extreme anxiety following the discovery of the remains of at least 10 people, it is important for you to extend goodwill to our community.

We appreciate that you have invited sex workers to come forward with information that may help in the investigation of these crimes, but we are requesting that you formally establish amnesty for prostitution related offenses until the killer has been apprehended. Declaring amnesty would go a long way in demonstrating that the police are serious about prioritizing the lives of sex workers.

Hello, I am a sex worker / ally to sex workers who lives in Suffolk County / the greater New York City area. I am calling to request that DA Spota formally establish amnesty for prostitution related offenses until the serial killer is apprehended. If the police motto is to protect and serve, you must work harder to extend this to sex workers.

The precedent: In 2006, when the “Suffolk Strangler” case was developing in Ipswich, England, the police department responded positively for a demand for amnesty put forth by the English Collective of Prostitutes. While the homicide investigations were underway, British police didn’t arrest sex workers. Here is a piece about the request, and a follow up piece in which Assistant Chief Constable Jacqui Cheer is quoted saying, “The welfare of the prostitutes working in Suffolk is my priority at this time.” Let’s put pressure on the nearer Suffolk county to respond similarly.