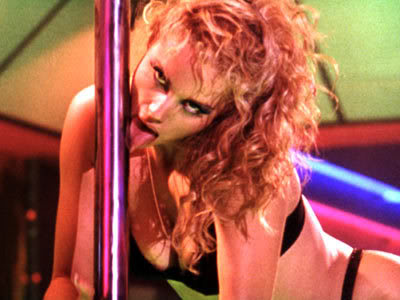 The Sneak Attack: I watch strippers approach customers from behind all the time. If you don’t think this is in poor taste, stop and think. Say you were meeting your partner’s parents, would you quietly stalk them in the restaurant, wait until they were studying their menus and then go in for the kill, startling them by introducing yourself to their backs? Do you like it when people sneak up on you? Then don’t do it to customers. They’re going to decline dances to get back at you. The types of strippers who do this tend to hover behind guys, bent at the waist, displaying their bodies to the customers that they’re not talking to, thinking they’re whispering in their target’s ear all sexy-like. What you’re actually doing is hurting his neck. Walk in a circle if need be; it’s not half as silly as putting people on edge before asking for money.

Shifty Eyes: Speaking of bad body language, make eye contact. Don’t answer that your dances are “very provocative” while absentmindedly scratching an itch on your nose and scanning the room for better customers. Even the most casual follower of pop psychology will be proud of himself for spotting a liar.

The Legal Name Safety Lecture: Have a fake real name. Practice saying it with the conviction of a 19-year-old learning the birthday and astrological sign on her fake ID. When guys ask what your real name is, share it and move on with the conversation. Most customers just think stripper names are funny and want the juxtaposition of a non-fantastical name. Or they want to feel cool. What they don’t want is to be educated on boundaries and safety like they’re predators. Not to mention, if they’re going to wait for you in the parking lot, not knowing your legal name isn’t going to stop them.

Customer Profiling: Old white guys and guys in suits are no longer the customers worth fighting over. In the words of a former cokehead manager, “We are not in a RE-CE-SSION. We are in a DE-PRE-SSION.” I don’t know if this is true, but you should disregard certain pre-2008 hustle advice because it comes from a different time. By now, these types have figured out that they’re supposed to be at the top of the customer pecking order and they use it to take advantage and act entitled. Younger guys don’t have the same time on their hands as retirees and don’t need to fill their meaningless lives with psychological games and strip club gossip. You’re better off talking to migrant workers, thirty-something IT nerds, trust fund kids, non-recruiting pimps, and anyone from the local construction project/refinery/steel mill/fishing boat. In the words of Vegas twitter stripper @veggiepoof, “It’s like young awkward guys are the new old guys.” Plus, cougars are in, and young guys think anyone over 25 is a cougar.

Drop The Act: If you have only one rigid Super Stripper ideal who nods, mimics body language like a mirror, says “fanTAstic” a lot, and is completely not you, then reevaluate. A work image that is too forced won’t fool anyone and will leave you exhausted in the process. If you’re a bitter cunt in your day-to-day life, then be a cute, sarcastic tomboy type instead. You’ll attract the type of customer with whom you’ll be more compatible than the ones you’ll draw in if you pretend to be a sorority girl. If you prefer to play WoW when you’re not at the strip club, then choose the name Valkyrie and let your people come to you. You might be able to laugh and have fun instead of cursing under your breath. Basically, just be yourself, okay? Er, a more polite, merciful, sparkly, hygienic version of yourself, with correct posture.

I promise that if you stop doing these things, soon you won’t even need to hustle. You’ll have Cristal Connors-status and can spend all your off-stage time sitting at your vanity, smoking while maintaining heavy eye contact with your reflection, and paying backhanded compliments to the new girls who look like they would make out with the pole.