TITS AND SASS SERVICE JOURNALISM BY AND FOR SEX WORKERS
Home This Time, It's Personal My Date With SF’s Douchebag PUA With A Rape Van

So, by now many of you have probably seen last Friday’s article on Jezebel about “Jeffy,” AKA jlaix, Captain_Derp on OkCupid (although he seems to have deleted his account), or Jeffrey Allen. Jezebel was inspired by a post on Mission Mission, concerning spottings of his “rape van,” emblazoned with hand-painted portraits of Tupac and Pedo-bear. Katie J. M. Baker found a local woman, “Amanda,” willing to go public about her ultimately fruitless correspondance with Jeffy on OkC. Well, I’d already gone a bit further.

Being an adventurous and somewhat awkward internet dater in the SF Bay Area, I went on a date with this fine specimen of manhood in December. And yes, it was all that you would expect—and more. Upom leaving the house, I told my roommate that it was either going to be the best date ever or the worst experience of my single life. It turned out to be both, and also an excellent insight into the psyche of the so-called pickup artist (PUA, in their terminology).

So when I wound up sitting at a Mission bar next to a self-proclaimed master PUA, I was armed and ready.

He’d messaged me on OkCupid a week or so before, and we’d been carrying on a very tongue-in-cheek text exchange. He’d texted me video from Vegas of bros dancing at a Deadmau5 show, and I’d made jokes about time travel, his awful outfits, and bacon bikinis. From the tone of our conversation, I knew that I would at least come out of the evening with an excellent story. Finally, the fateful evening arrived. Stuck in traffic, I let him know I would be late, and the warning signs started coming fast and thick. 15 minutes after the scheduled beginning, he was already clearly drinking heavily, and I hadn’t even parked.

I walked into Cha Cha Cha, and sure enough, he’d finished nearly an entire pitcher of sangria. He was also sporting a deep V-neck, a rhinestone “$” pendant, and the slight suggestion of a mullet. He introduced himself as Jeffy, a writer. I pried a little, and he admitted that he also gave seminars to men on how to date women. I immediately, without much tact, told him what I thought of his career, and the color drained from the broken capillaries in his cheeks. He wasn’t expecting a hooker to know concepts like “misogyny” and “problematic gamification of human interaction.” And yes, I was completely open about my work with him. I usually am on first dates, because of my philosophy about honesty and being out as a form of activism. And I love the startled expression that provokes in most men.

He seemed to think that the fact that we both work closely with male sexuality, insecurity, and romantic prowess made us similar. I saw it as more of a light side/dark side of the Force comparison. I try to make men feel more comfortable around women, around their own bodies, and work on their sexual and romantic skills in a constructive way. He teaches them how to hide their real selves and use acting and costumery to have drunken sex with strangers and then brag about it on the internet. They treat women like objectives in a video game, leveling up to “hotter” women, threesomes, and other more challenging situations. Hence I’m pretty sure that my status as a sex worker means trying to nail me for free is some sort of a boss fight.

Instead of leaving him to his wine, I decided to use the situation as a case study in asshattery. I ordered us some tapas, and went out for a cigarette. He followed me outside, and in between bragging about his many cars (including the now-infamous van), begged drags of my Parliament and started to awkwardly invade my personal space. Uh oh, I thought, and headed back inside. We sat down, and he started to “open up” about his life, trying to put me off guard by making jokes about his stature (I have a good five inches and 40 pounds on him), his lack of emotional maturity, and his crippling loneliness. So now he was going for the pity lay. Suddenly, with absolutely no warning, he reached out and started grabbing at my waist, and roughly tickling my ear. I grabbed his wrist, stared him down, and firmly declared that he was invading my personal space, and had absolutely no right or permission to do so. He looked sheepish and confused, and focused on his now-empty glass of sangria.

A few silent moments went by, and then he announced, “Well, at least you got a free dinner out of it.”

“Yes, that’s true,” I said, reveling in his defeat. He glared at me, growling “I think you should go now.” And I did. I grabbed my jacket, spun off my stool, and fairly strutted out the door.

After unlocking my car and getting inside, I heard my phone vibrate. I pulled it out, and to my surprise, I already had three texts waiting, with more appearing by the second. “Kill yourself nigger.” “You’re pathetic.” “The cognitive dissonance must be killing you” (absolutely no idea how he’s interpreting this phrase). “The funny thing is, we’re actually perfect for each other,” and a final “You’re pathetic.”

When I got home, I decided to do a little research. I found his profile on several PUA forums, and both of his books on Amazon. The reviews made for a very entertaining read. I also posted on Twitter to entertain, but also to warn my OkC-using friends about this predator. One of my lady friends even reported him to OkC management for harassment, to my delight. Fucking with misogynists is my idea of a great time. Wanting to see how he’d distort the story for the entertainment of his colleagues, I checked the forums the next morning, hoping for a “trip report,” but alas, he seems to have stopped posting them altogether.

For your enjoyment, here is a series of screen grabs of our text conversation, both before and after the date. 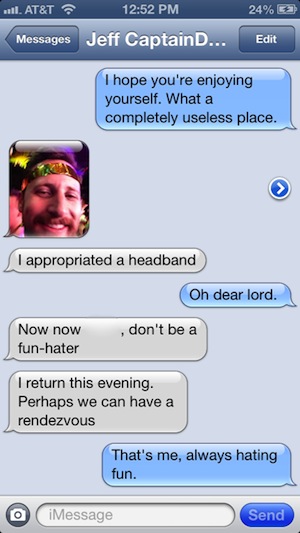 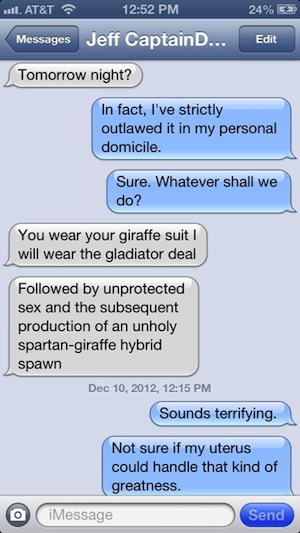 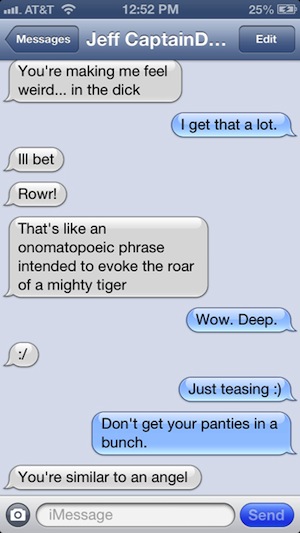 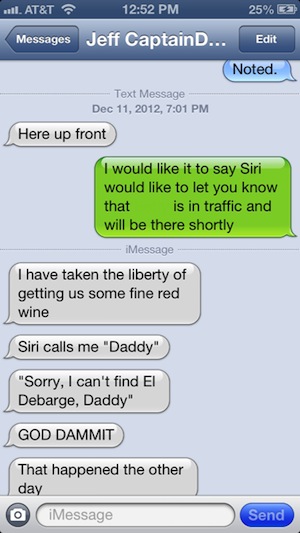 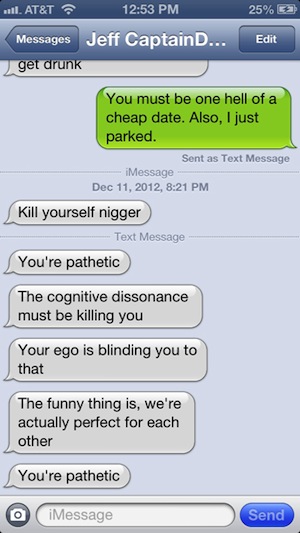 A version of this article appeared earlier on Jolene’s Tumblr. We thank her for allowing us to repost it.