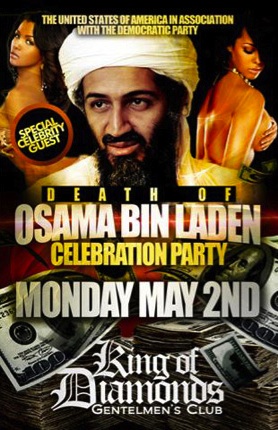 Will the patriotic Americans of Miami make it rain at this somewhat tone-deaf celebration? Check it out at the Miami New Times: Celebrate Osama Bin Laden’s Death Tonight With King of Diamonds’ Big-Booty Strippers

One wonders who the celebrity guest will be. And if they will have a commemorative “Tenth Anniversary of 9/11” party in September. Perhaps a Pat Tillman birthday celebration? War! What’s it good for? Strip club promotions!

In other King of Diamonds news, the New Times (a consistently great source of strip club-related stories and cultural reporting) reported on Rick Ross’ supposed million-dollar outing at one strip club, while strippers everywhere said, “Yeah, right.” Brinks truck, my ass. Well, here’s some strippers calling him out, hilariously.

Every experienced stripper knows that, with few exceptions, a customer who talks about how much money he spends is full of shit, but claiming to have spent $1M is some pretty exceptional BS. Where was the fact-checking for this story?