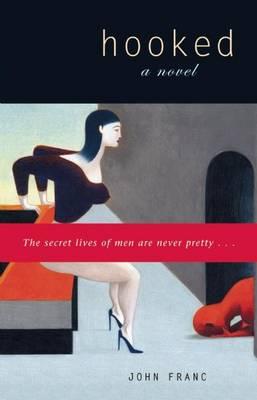 “We were all monsters” the nameless narrator tells us four sentences into Hooked by John Franc. The “we” refers to nine men who live in a city where prostitution is conveniently legal and when the men learn this fact, they begin a downward, hooker-hopping spiral of frightening velocity that ends in the most melodramatic plot development in the history of ever. (Does any American man have nine friends he’d trust to join him as he frequents brothels? I digress.) As you might imagine, for me, a prostitute, that opening line was about as appealing an introduction as a fart in the face. But it was accurate warning for what lay ahead. I can’t think of many books I’ve hated as much as I did Hooked, and it’s easy to explain why. The book, a novel imitating a memoir, is essentially a polemic. The husbands are unsympathetic villans, the wives are unsympathetic victims, and prostitutes are the objects with which men hurt non-prostitute women—and ultimately, destroy themselves. Shorter version: prostitution is bad, mmkay? When men hire prostitutes, other people end up hurt. It’s a literal [spoiler alert, as if anything could spoil the already terrible experience of suffering through this] killer!

The plot, which doesn’t show up until halfway through, centers around one of the men deciding he has to tell his wife the truth about his philandering. The other men are all like, “nooo, don’t do it, because we’ll get in trouble too!” and then someone disappears and children start crying and there’s suggestions of committing murder and finally the police show up—you know, the usual fall out from paying for sex even when it’s legal. If you’re conservative-minded enough, Hooked‘s course of events is completely plausible, and the book will be unhesitatingly received as a sober warning against a pressing contemporary danger. (Did you know that nowadays men can cheat on their wives without much trouble? Cue the pearl clutching.) But if you’ve got any objections to our time’s most commonly held sexual mores—monogamy is essential in a romantic relationship; cheating, unavoidably, ruins lives; women are always the vulnerable/wronged parties when it comes to sex—Hooked is going to seem about as hysterical and offensive as those anti-marijuana ads where the guys at the drive-through window killed a little girl on a bike. It’s not profound; it’s just stupid.

There’s no room for empathy for these nine nameless schmoes, not least of all because they’re so damn self-pitying. Early in the book, the narrator laments, “we recognize that we are ruthless and evil and immoral and indefensible.” And why are they such vile, reprehensible slime? Because they’ve paid women for sex and lied to their wives in the process. That’s pretty much all we know about these people, who, like everyone else in the book, are humans in name only. Character development is studiously absent. All women are defined by their relationship to the men, meaning they’re either wives or whores—or moms: “She was a good mother. Perhaps she wasn’t much else, but she was that.” (No one’s bothered to tell the narrator that many escorts are also mothers; not having given birth is repeatedly cited as one of the best thing about women at the brothels.) John Franc, ever the equal opportunist, returns the favor by making sure that the men are primarily defined as failing husbands unencumbered by hobbies or passions or jobs about which they give a shit.

The assumptions behind this book are essentially regressive and familiar, and its content is far from explicit, yet the author chose to write under a pseudonym and made the point of including in his bio that he’s a married man who “lives in North America.” I couldn’t help but think he wants readers to suspect the story is a true one he himself experienced, and my theory is reinforced mightily by scaremongering crap lines like this: “We were playing poker at a bar perhaps not far from where you live.” Oooooohhh, spooky—the actual clients of actual prostitutes existing within a 50 mile radius of my home! How will I ever sleep at night? He also diverges strangely midway through by having one character talk to another about signing nondisclosure agreements and speculating on how much will “get edited out.” Naturally, this is followed up by someone saying “I hope people get a good long look at us and understand that sexual depravity in this kind of way is just fucking normal.” Ugh, the interminable self-loathing. Now I feel like I need a shower.

Meanwhile the text lives on vagaries that are supposed to imply universals—”Everyone knows that there are several kinds of men, and we all knew which kind we were”—but bely the lack of insight at the core of the book. Isn’t it funny that terrible people always claim everyone else is equally terrible, while sweet, normal people suffering from a uncommonly bad decision assume they’re the worst people in the world? Terrible people are also usually narcissists, and Hooked‘s narrator fits the bill perfectly. Tell me this isn’t uttered by a man suffering from serious delusions of grandeur: “Every second you were doing what you were doing; you were ruining someone else’s life—the one astride or under you, and of course the ones in your own family.” Really, dude? You’re going to ruin my entire life with your penis? You’re gonna ruin a condom if you’re lucky and that’s about it. Sorry, but it takes more than a Cialis-induced erection to keep a good woman down. The narrator also loves using the phrase “stirring the milkshake” which is not the most female-positive idiom I’ve ever heard. (If you need it spelled out for you, let me just say the term is best applied when they show up at the end of a girl’s shift.)

Another sad aspect of all this is that Franc can actually write, and in moments where his vendetta against men or himself or marriage or whatever the hell impelled him to write this atrocious book fall away, he comes out with something worth reading: “When you led these multiple lives you were doubling and tripling your time anywhere. Perhaps that was why having a secret life was so attractive to so many people. Widening your life like this was the closest anyone was going to get to immortality.” He even has enough sense to see flaws in the beliefs to which he hews most closely, or else he wouldn’t arrive at moments like, “either sex mattered so much that monogamy couldn’t possibly be an answer or sex didn’t matter at all and then who the hell cared about monogamy?” But his narrator never bothers to explore these ideas fully, or come to any realizations about his behavior and his values. “Marriage was the first wrong piece of the puzzle,” he says eventually, but he can’t seem to fathom any other alternative and divorce (and the preceding honesty) isn’t thought of as an option by most of these men. Those who contemplate it are destroyed.

Steve Almond wrote that Hooked “lays bare the masculine weakness for self-destructive conduct in the erotic realm, the basic confusion between desire and decency.” I respectfully disagree. I think it simply points out that such weakness exists, which is hardly breaking news. And for it to be self-destructive, regardless of gender, there can be no confusion, since confusion recuses will. When it comes to sexual transactions, particularly paid ones, the flouting of decency is often an essential component. This book doesn’t lay anything bare. It’s about a bunch of self-pitying sociopaths married to one dimensional women and where does that leave us, as readers? It leaves us with men who are monsters, women who are mothers, and prostitutes who are milkshakes.