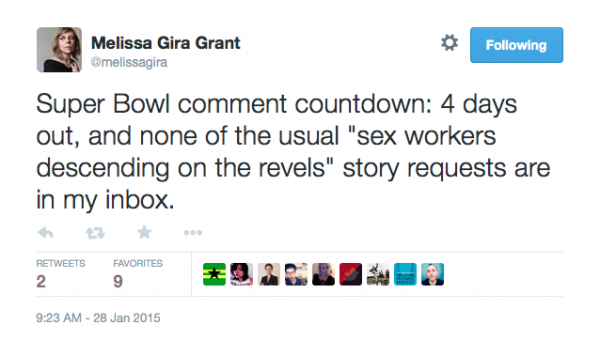 Some anti-trafficking organizations and most politicians don’t let facts get in the way of a good narrative. Senator John Cornyn (R-TX) was just fact-checked and found wanting while repeating some of Abbott’s greatest hits in the service of anti-trafficking legislation. Roe-Sepowitz’s “grammar change” has become a powerful political tool.

Lucky for Sepowitz that the Super Bowl came to Arizona this year, where philanthropic beer heiress Cindy McCain set up anti-trafficking shop in anticipation of the game. Unlucky for them, Glendale (or even Phoenix) just can’t compete with New York when it comes to media attention. Despite the involvement of McCain with Arizona’s human trafficking task force, the volume of reporting on Super-Bowl-as-trafficking-nexus has decreased in 2015, with even anti-trafficking organizations repeating themselves saying that there’s no discernible increase around the game.

So Super Bowl trafficking hysteria may have hit peak hype, or it may have just moved to a quieter media market. That seems likelier than the idea that Abbott, Cornyn, or McCain read or processed any of the following stories. For as long as there have been stories about the Super Bowl being a nexus of sex trafficking, there have been stories about how that claim just doesn’t check out. It might have taken five years of them, but they seem to finally be having an effect. Here’s but a small sampling, with hopes that there will be ever fewer needed in years to come. 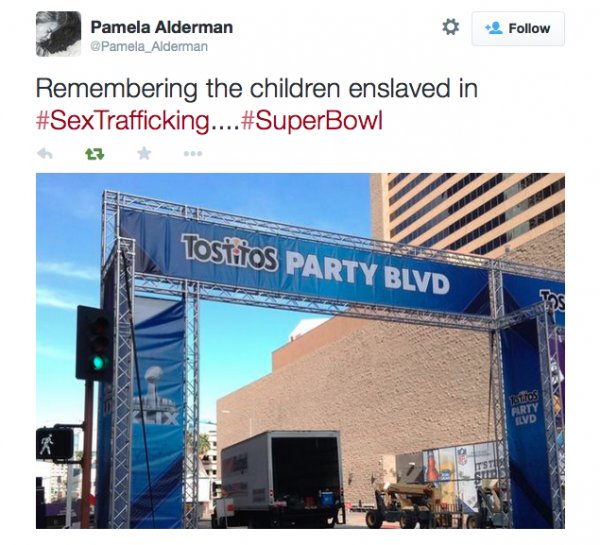 But Casey, special agent in charge of the FBI’s Dallas office, said he saw no evidence that the increase would happen, nor that it did.

“In my opinion, the Super Bowl does not create a spike in those crimes,” he said. “The discussion gets very vague and general. People mixed up child prostitution with the term human trafficking, which are different things, and then there is just plain old prostitution.”

Ernie Allen, director for The National Center for Missing and Exploited Children, said he was misquoted last year when predicting 10,000 prostitutes would show up in Miami for Super Bowl XLIV.

In some of our own research of the Super Bowl/hooker invasion myth, we spoke to Phoenix police Sergeant Trent Crump, who told us that when the Super Bowl was in Glendale in 2008, his department didn’t see the dramatic increase in prostitution arrests promised by the religious right.

As politicians and activists continued to crank up the fear factor, NFL spokesman Brian McCarthy had had enough. “This is urban legend that is pure pulp fiction,” he said in January 2011. “I would refer you to your local law enforcement officials.”

One week before hosting next week’s Superbowl, for example, Indiana’s House and Senate both voted unanimously for a new law that makes recruiting, transporting or harboring anyone younger than 16 for prostitution a felony punishable by 20 to 50 years in prison. The law was passed without a single documented case of sex trafficking in the state. You now get less jail time in Indiana for murdering a teen than for pimping her.

Sex work at the Super Bowl: the myth and its makers

With nearly any woman working in a club a potential target – or any woman on the street, hurrying home with her eyes down for whatever reason – it may be a minor miracle that the New Orleans police department has reported only eight arrests, and these with the considerable resources of the state police, the Department of Homeland Security, and the FBI.

The Reality of Trafficking At The Super Bowl

The Super Bowl and Sex Trafficking

As the supervising attorney of a project at the Legal Aid Society that represents nearly all of the people arrested on prostitution charges throughout New York City, I know firsthand the devastating consequences that aggressive arrest practices can have for both trafficked and nontrafficked people engaging in prostitution. Many, but not all, of our clients are, in fact, trafficked, and many more have survived an extensive amount of brutality, violence and trauma. Turning them into defendants and pushing them through the criminal justice system contradicts any claim of assistance.

Does sex trafficking increase around the Super Bowl?

Roe-Sepowitz said that so far, the research does not show correlation between the Super Bowl and higher levels of sex trafficking activity.

And don’t forget the surest sign of an urban legend, a Snopes.com entry.