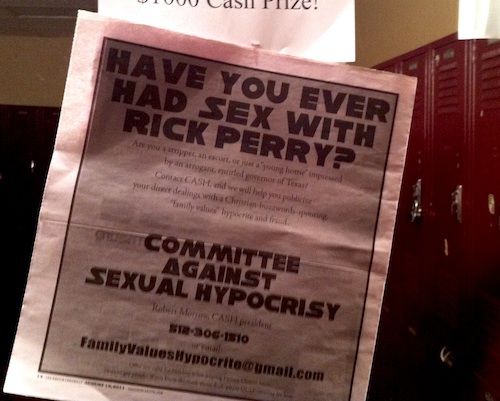 As another long-term governor would say, it would seem to require a dead girl or a live boy to stop lucky Rick Perry from being elected. But one passionate Ron Paul supporter, Robert Morrow, wants so badly to find live girls who’ve slept with Perry that he placed this ad (pictured at the left in the dressing room of an actual Austin strip club) in the Austin Chronicle last week.
Morrow wrote a virulent screed detailing what he considers to be Perry’s biggest transgressions under the amazing headline “Tea Party Fraud Rick Perry is Political Herpes.” He unashamedly sources his claims to his own strip club conversations. By the way, good for you, Robert, for not being ashamed to be out as a strip club patron.

I know this because I am a patron of Austin strip clubs. My friends and excellent contacts in the Austin strip club community tell me that Rick Perry, a la Bill Clinton, has an enabling entourage who gets him “young hotties” to have sex with – both here in Austin and especially when he is on the road. I learned about this before the 2010 Texas primary. I had an attractive stripper tell me about her direct dealings with Rick Perry. She said that she was attempting a Monica Lewinsky-type act upon Gov. Rick Perry (oral sex) but that in her words Perry was “too coked up” to perform sexually! When it came time for the stripper to leave, Perry gave her an outrageous amount of money, so large in fact that it probably means that Perry is taking cash bribes or illegal gifts to fund his extracurricular activities. Perry is not a rich man and I doubt he is spending that much of his own money on the women. (Actually sweetheart real estate deals have made the man unusual money.)

If Morrow actually had the dirt on Perry, he wouldn’t place this ad. This would seem to be the same non-starter as the Perry-is-gay rumors which have persisted since the 90s despite a complete lack of supporting evidence. Going after a man’s private life is, on the surface, indefensible. There are so many other things going against Perry, like his limited intellectual capacity, his moral inconsistency, his inability to build governing coalitions, and his financial mismanagement of Texas. But he also wanted to keep gay sex illegal in Texas, so, no sympathy here. And Perry’s potential hypocrisy seems to be Morrow’s biggest problem.

I’m so sad that he didn’t make a viral video ad asking for people who’d banged Rick Perry to come forward. Can you imagine how entertaining it would be? We’ll have to settle for watching notorious Texas conspiracy theorist/crank Alex Jones interview him. I love this quote: “The reason I know that, Alex, is because Rick Perry, his enabling entourage and I like the same women.” Strippers, prepare to be entertained (everyone, please go to 9:05 for the soundbite of the week). And if you recognize this guy, email us!