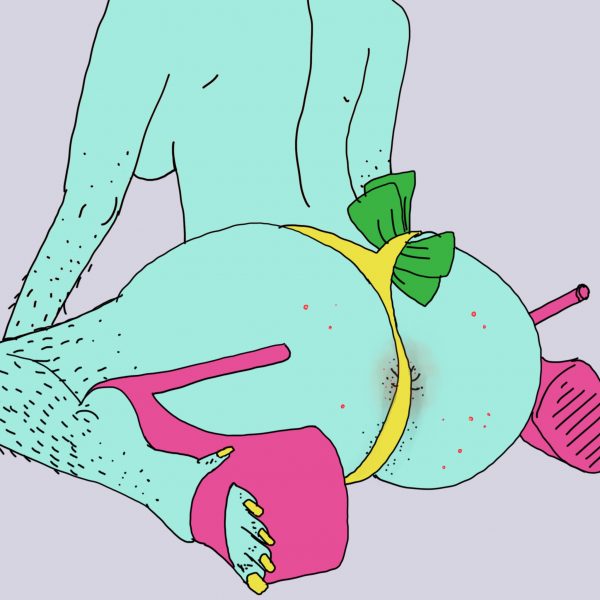 Tell us about your weirdest customer.
Weirdest guy was a huge German guy who bought a tin of body butter to the club and tried to rub me with it. After I said no he already had it on his hands so he rubbed into his hairy thighs (he was wearing really short shorts) so I was trying to give him a lap dance without touching his slimy hairy legs!

Can you explain your method?
I use the app procreate on iPad Pro with the Apple Pencil, so basically, I’m drawing directly onto the iPad just as you would with paper.

When did you start the Exotic Cancer project? Why did you start it? How would you describe your work?
I started it late December, I was trying out drawing on my new iPad, the very first drawing was actually the “scammer” one! I thought it was pretty good and was going to post it on my normal artist Instagram account (which I won’t disclose) but decided to start a new account instead to keep things separate. It just unexpectedly grew from there! I’m not sure what kind of art I’d call them, they were originally just sketches, but with the relatable captions, I suppose they’ve fallen into the meme/comic category. 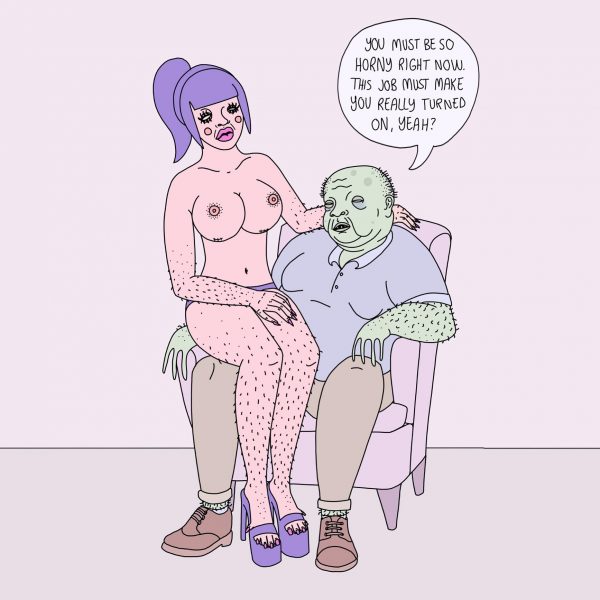 Do your colleagues at work in the strip club know about your art? If so, what do they think?
I think most of the dancers around here follow my art. Only three of my dancer friends (that I’m aware of) know it’s my art, and that’s because they guessed it was me due to recognizing my style. I think word will get out eventually about who I am. They all love it, which is great!

Additionally, do your colleagues in the art world know about your work as a stripper? If so, how do you maintain the two separate identities?
No. I hope to keep that separate. The styles of each are different enough that you probably wouldn’t link both of my work unless you know me.

Were you surprised by how popular your IG became so quickly? Why do you think your IG resonated with so many dancers?
Yes! I had no idea it would get so popular, I honestly thought nobody would really notice or care for my drawings. I’m so thankful though and I think it resonates with so many dancers because it’s highlighting all the shitty parts of the job but in a fun and relatable way, you realize customers say the same thing no matter where you are! 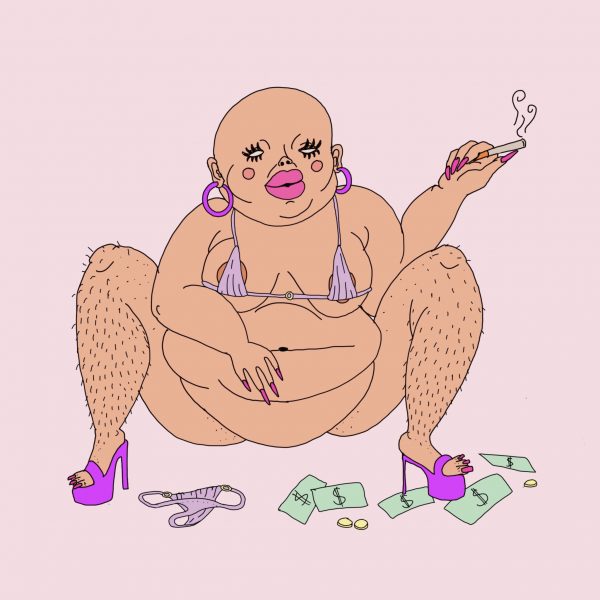 How did the IG gifs happen? How can readers find them?
I have an interest in animation and I notice there’s never any stripper related gifs, so I thought why not make my own! You can find them by searching “exoticcancer.”

Which artists have inspired or influenced you? Any artists that are/were sex workers/strippers?
I’d have to say Jacq the Stripper—who is a dancer herself, is a huge inspiration! I’m sure you’ve seen her comics, they’re so good. I also love the style of Chris (Simpsons artist). I like the way all of his characters look a little bit…mangled.

What can you tell me about your trademark style? Why are there no irises, for example?
I enjoy illustrating all the aspects of the body that most artists choose to leave out, like the body hair and belly fat. I think they add a lot of character! We all have body hair and chubby parts so why leave them out? It seems so normal to draw hairless arms, but why? Nobody actually has hairless arms! As for the no iris thing, it has been something I’ve been doing for years, it’s carried across all my drawings. I think I started doing it back in high school when I went through that typical “emo” phase and I’d draw a lot of creepy looking girls with no irises, and it’s just stuck with me until this day.

Which is your most popular print? Why do you think it’s so popular?
It’s definitely the “little boys” print with the tiny men trapped in a pleaser shoe. I think it’s more popular because it has a bit of a concept behind it, it’s not just a pretty picture. 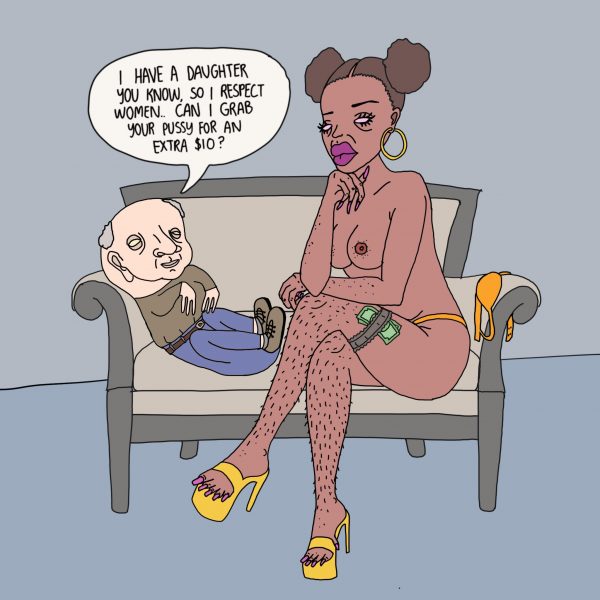 My friend has said she loves your choice to portray the grotesque aspects of customers with a cute pastel color palette. Why do you choose the colors you choose, and how do you decide to draw individual customers (the small man with the ape toes, for example)?
I generally prefer a pastel or muted color palette, plus I think it makes the black outlines with the leg hair and all that stand out more. I also like how it gives my work a fun, girly feel to it. The way I draw all the customers is an exaggeration of how I see them, some of them are a bit shriveled and gremlin-like, drawing their feet like “ape toes” really helps to get that message across. I like all my customers to look like seedy and disgusting.

What critiques would you offer most art that’s about sex work but not made by sex workers?
People can do what they want, but it would be like me drawing comics and art about being a plumber. It wouldn’t really make sense and it probably wouldn’t hit the nail on the head unless I actually knew the industry.

What advice would you give you sex workers making art about their work? What would you like to see more of?
I think it’s really fun and somewhat of a relief to know so many girls go through the same thing, across the world. If you can make art related to sex work then just go for it! We need more of it. I’d like to see more art about being an escort or such.