TITS AND SASS SERVICE JOURNALISM BY AND FOR SEX WORKERS
Home Blast From the Past Blast From The Past: Striptease (1996)

Until several days ago, Striptease was a glaring oversight in my otherwise comprehensive history of sex work film viewing. I thought I should rectify that problem in light of my grousing about Demi Moore’s ham-handed anti-trafficking efforts, so I did. Sort-of. (Halfway through, I had to turn it off. It is unwatchably, un-fun-ly bad.)

Here are the highlights of what I saw before then. They should tell you everything you need to know:

-The sympathetic black bouncer calls the customers “chumps” and owns a pet monkey which everyone seems completely cool with. He also refuses tips from Demi Moore because she is the embodiment of All That’s Good In The World. The other girls probably don’t tip him because

-the bouncer spends his time off the floor, in the ladies dressing room, reading the newspaper with his monkey. That makes him not so effective at doing his job when men are overcome with lust during Demi Moore’s outstanding dancing and fling themselves at her shouting, “here’s $500, baby” in the middle of what appears to be a Tuesday afternoon shift. She doesn’t take the $500.

-All of the other strippers are infinitely more interesting than Demi Moore, particularly the one who wears a head-to-toe furry cat suit and starts in on the world’s most adorable dance, which we of course are not allowed to see because

-only Demi Moore gets to do her full, horrendously choreographed, arhythmic, angry, vaguely German strip routines. She dances the way  I would dance if I were trying to make people laugh at me. Not that I have any other styles in my repertoire. Also, she throws her clothes into the audience, which, Kat, you never actually do that, do you? I know those chumps would steal your unmentionables in a heartbeat. (Kat: Most strippers don’t throw their clothes at the audience. In fact, when I was hired in Guam, we were explicitly told to throw our panties against the back wall of the stage lest any Japanese tourists help themselves to a souvenir.) No one ever puts money on the stage during these elaborate affairs, so I have no idea how girlfriend actually gets paid. The only private dance she ever does is for the congressman on his yacht.

-Demi Moore’s character has a name. Linda, maybe? She has a daughter who is her real life daughter and implants that were her real life implants until she had them removed. It would seem that at some point she holds a gun. 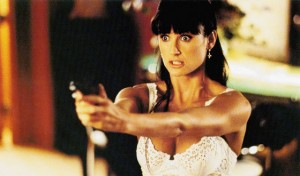 I’m not going to try to improve upon perfection. When Leonard Maltin says the movie is “not funny enough, or dramatic enough, or sexy enough, or bad enough, to qualify as entertainment in any category,” he pretty much summed up the Striptease experience. What really interested me was a Roger Ebert quote I came across in a review of the same:

Part of me loves that take—Shy can be very sexy and desperation never is—but a larger part of me feels like it’s old-fashioned and probably more than a little misogynistic. It harkens back, to me, to my conversation with Katie West about men who seem to enjoy female nudity but don’t want the woman to be enjoying it too. Or to put it another way, men who want a woman’s nudity (or sensuality, or sexuality) to be something that they have access to at a cost (emotional, mental) to the woman, almost against her will.

It’s like “ha! I’m doing it! You’re not doing it to me.” It’s not like James Bond unzipping somebody’s dress. It’s like “Yeah? well, you’re over there and I’m throwing this off, and I’m throwing it at you, and I’m leaving, I’m walking off the stage.”

And her bold, brash, sultry sets are amazing.