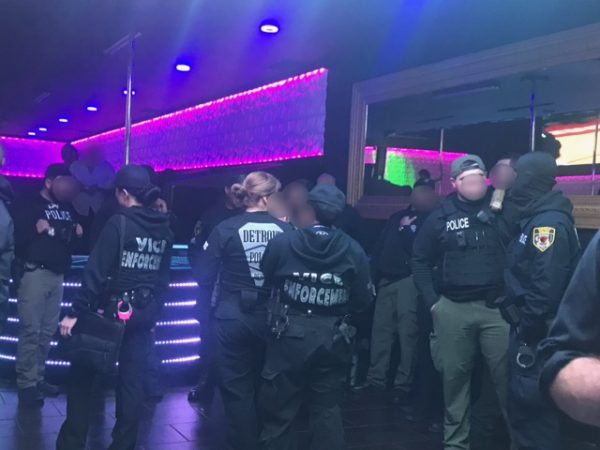 I asked Mary if she was surprised: “Not really, given how Detroit has really increased their raid[s] frequently recently. I’ve heard they’ve been bad in Detroit the past year or so.”

It’s worth noting that Daniels’ original performance was delayed for not securing the right “permits.” Permit is the wrong word here—Daniels didn’t get her police-department-issued Sexually Oriented Business License in time. Locally, we call this a Cabaret ID or Dance Card and it is an absolute must for any employee (not just strippers) wishing to work in a strip club in Detroit. Getting busted dancing without a license is a misdemeanor for both the manager on duty and the dancer herself. Fines for working without one can range from $50 or more. Not having a card is an absolute non-starter in Detroit and only the stupidest managers would allow workers in the club without one. It’s the very first thing vice officers check for when they raid local clubs.

Which might explain Detroit Vice’s appearance at Daniels’ performance. What a thrill to ask Stephanie Clifford herself, in the flesh, to see that precious license! The more likely explanation, however, is that Vice correctly anticipated her performance would be a packed house—meaning they could handily dispense multiple tickets. Either way, had Daniels been caught working without her card—or getting touched by a customer, or appearing partially nude off the stage—that would have been a high-profile bust for DPD, a considerably more titillating conquest than the working-class dancers that are usually ticketed during raids. (Weirdly, when Daniels performed at the Penthouse bar at a later date, DPD hit Truth again.)

In a framework very similar to Ohio’s and NOLA’s strip club laws, Detroit has what I refer to as the Bergthold ordinances. In 2009, the Detroit’s city council paid Scott Bergthold $75k as a consultant to rewrite the city’s new sexually oriented business ordinances. Bergthold—who also authored the laws Stormy Daniels was arrested under in Ohio—is a real darling of the Christian Right, a shadowy attorney who graduated from Pat Robertson’s Regent University law school. He has one job: Municipalities hire him as a consultant to write lawsuit-proof adult business ordinances. Sometimes he appears as an expert witness. And sometimes he represents municipalities when club owners sue for constitutional violations. He will not talk to reporters unless his client specifically asks him to. His ordinances were voted into the Detroit city charter in 2010.

Generally, under Bergthold ordinances, this is what is criminalized: any physical contact between a worker and a patron; appearing semi-nude anywhere but on a stage; “simulating” a sex act; and the existence of separate private or “VIP” rooms. It is not uncommon for local dancers to accrue multiple tickets during police raids. More recently, in 2016, Detroit city council amended their SOB ordinances, fundamentally cementing a strategy to suffocate its strip clubs and further compromise the livelihood of the roughly 4,000 people they employ. On November 22, 2016, the city council unanimously voted that any strip club deemed a “public nuisance” may be shuttered via police injunction at will while its court date is pending. Even though there had been at least four separate hearings on the issue, the amendment passed with little fanfare. The very same day, the Detroit Pistons announced their relocation to the taxpayer-subsidized Pizzarena downtown. I couldn’t get any reporters to even cursorily ask a stripper for comment.

If I were to speculate, I’d guess the amendment was inspired the city’s feud with Erotic City, a predominantly Black club on the Eastside. The club was shuttered via court injunction in a very public spectacle. (I have the police reports from the city’s supposed two-year investigation against that club. Considerably more crime happens at almost any gas station in Detroit.) Councilmember Scott Benson told the press: “The message from the city is that you have to comply with the law. If you don’t comply with the law, it might take some time, but we’re going to get you and we’re going to enforce.” Benson, who a year earlier was jailed after getting busted passed out drunk in a city-issued vehicle, sponsored the amendment to Detroit’s SOB laws.

At least two clubs have been shuttered since the amendment’s passage.

But Bergthold’s laws are impossible to comply with. They fundamentally criminalize almost every part of working in a strip club—and that’s the point. Enforcing them is the easiest get for a police department that’s frequently mired in corruption scandals and notorious for barely responding to a 911 call in a reasonable amount of time. And Bergthold’s laws function as a fail-safe for a city ready to gentrify, held in abeyance until investors start eyeing strip-club-adjacent properties.

Historically, city residents have always had a tenuous relationship with the strip clubs. In Detroit, there is no formal district where strip clubs are zoned. Residents, rightfully, have complained of loud music, excess traffic, and violence. A 14-year-old was able to work in one club, allegedly for months. Five years earlier, two women were literally trafficked in one. The majority of clubs are located in residential neighborhoods, which intensifies the “secondary effects” data Bergthold uses to qualify his laws. I’m not sure if club owners have ever actively tried to get to know their neighbors—I wish they would.

I’d like readers to consider what topless dancing and the free press have in common: they’re both protected by the First Amendment. But much like SESTA, Berghthold’s laws tap dance around those protections. Imagine being a reporter—you’re allowed to make journalism, but only if you’re licensed. You can make journalism, but only within certain parameters. Did you unknowingly make journalism illegally? That’s a ticket. Was your laptop enabling an illegal act of journalism? Now it’s evidence, hand it over. In 2018, under President Donald Trump, reporters would agree that this scenario doesn’t seem that unlikely.

But as Stormy Daniels’ arrest illustrates—it’s already happened. Only the victims here are strippers.