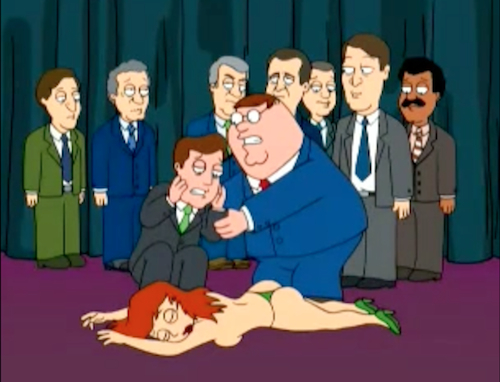 In 2013, as a stripper of four years, I had come to know female coworkers who had been attacked, assaulted and stalked (including myself). Four nights at week at 3 a.m, I always eased my car slowly into the driveway, allowing my headlights to fill the dark bushes and fence of my yard, and marched with my keys in my hand, quickly entering my home. I felt comforted by the low scream of my alarm, which did not get turned off until the door was locked behind me.

After shower, food, and puppy-belly-rubs the television usually went on about thirty minutes later. There was never much on, except infomercials, decade-old Forensic Files, and Family Guy. Having no interest in the first, and having viewed all the former, I decided to give the latter another try. I had mostly avoided Family Guy for much of its run, since I was busy with school and day jobs. Lying in bed, after an evening of being harassed and harangued for what feels like minimum wage, I was rubbing my sore knees with my calloused hands, when I was greeted by the image of Peter Griffin, and these words:

“…but I’ll tell you what’s not cool–killing strippers. Strippers are people too; naked people who may be willing to pleasure you for a price you negotiate later behind the curtain of a VIP room. Besides, there’s no reason to kill them, ’cause most of them are already dead inside…Good night, folks!”

I was finished as soon as I began with Family Guy. I don’t think it’s funny. If you think that might be a rare instance of tolerating brutality against women, here are some more neat examples. Let’s start with Stewie shooting a prostitute. How about necrophilia and pedophilia?

Raped by a Clown

It is at this point that fans of Family Guy have begun formulating arguments against me. Here’s a few that I have come across.

1) “MacFarlane has staff writers for his show, he doesn’t write all of the jokes! Therefore he isn’t to blame.”

No shit he has writers. So does Jon Stewart of The Daily Show, but you can bet your ass that nothing will make it to the airwaves without Stewart’s approval.

2) “The protagonist, Peter Griffin, is meant to be poking fun at men; he’s overweight, ignorant, and sexist. Therefore it is the stereotype that MacFarlane is belittling, since the words are coming from Peter’s animated mouth. As the ‘fat, blue-collar, ignoramous’ he shouldn’t be taken seriously.”

Unfortunately, there are a lot of slow, middle-class undereducated men who will identify with Griffin, without realizing that they, too, are part of the joke.

3) “Family Guy is an adult cartoon, and therefore deals with adult material, which shouldn’t be censored.”

Even if Family Guy is a cartoon for adults, most of its viewers are teenagers, and are still formulating opinions about the world around them.

Entertainment Weekly estimated the viewer ages in groups for males and persons. Here is the breakdown:

If we reinforce ideas such as the ones presented by MacFarlane, is it really such a surprise that we are raising a rape culture? (See: the case of the University of Vermont fraternity whose members were suspended after they circulated a quiz asking the men who they would rape if they had the chance.)

4) “Seth MacFarlane is hugely popular; he’s built an empire for himself, and is highly successful. Leave him alone.”

WHY IS THIS AN ARGUMENT? Just because something makes a load of money and has followers, doesn’t make it valuable or ethical! Some of the most successful business ventures are arguably the most controversial, such as the tobacco industry and the fast food empires of America. Even some Jersey Shore cast members are allegedly pulling in six figures a season; that certainly doesn’t make the show socially redeemable.

5) Lastly, someone will point out that “Family Guy makes fun of all kinds of people, not just women!” You are quite right, there are also plenty of jokes about mentally-handicapped people, minorities, gays, lesbians and transgender individuals.

One thing at a time, people. My focus is women.

In conclusion, I want you to read this follow script, from an episode titled: “I Dream of Jesus.”

Peter: Can I have that record? I love that song. I’ll let you have sex with my daughter…
Man: I don’t know…let’s see what your daughter looks like.
P: She’s…uhh…(pans past Meg to “hot” girl)…right there!
M: Ok, I’ll do her. But can you tell her to cry and beg me to stop?
P: I think that can be arranged.

As a woman, I want people to stop thinking that disrespecting women is funny. As a stripper, I want them to stop thinking that disrespecting strippers is fun. Making rape and sexual assault humorous takes away the power of the victims and survivors and lessens the culpability of offenders. I don’t expect everyone to agree with me. It’s much easier to argue that I’m oversensitive and splitting hairs, so that you can watch your television show without any guilt, rather than making a stand—or at the very least, changing the channel.