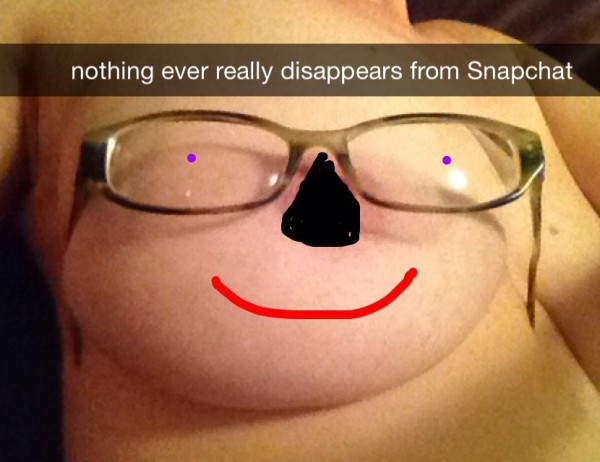 This ruling matters to sex workers who perform on camera, many of whom use Snapchat as a marketing tool to communicate with and keep the interest of customers. On the cam site from which I broadcast, selling viewers access to their Snapchat by the month is increasing in popularity as a supplemental form of income for many models. Customers can give a model an “offline tip” for a specific amount of tokens advertised on a model’s profile page in exchange for racy Snapchats sent out on a daily basis. Snapchatting creates the more personal relationship with models that customers crave.

For sex workers, the appeal of using Snapchat instead of sending photos to customers directly is because of the perceived barrier of protection between us and our customers. We can connect accounts without sharing personal information like phone numbers, and we don’t have to worry about customers stealing our images and reposting them for profit on adult sites, because recipients can’t take screenshots of our images. As it turns out, everything we thought we knew about Snapchat as cam performers is wrong. We were granted none of these protections.

Cam sites, on the other hand, are extremely upfront about the risks of streaming media. Performers are given a long terms-of-use clause that spells out security risks. We are also told that customers may be able to access recordings of the private shows they paid for via their cam profile only. Of course, they can produce a low-quality copy of the video by recording their screen, but that’s a risk we have to weigh out for ourselves.

As someone who builds software, I knew not to trust Snapchat’s false promise of disappearing photos. Security and privacy are major issues that are hotly debated in the software industry today. The threat of DDOS attacks and database breaches worry even the most talented and experienced developers. I also know that you can never really delete an app account even when you delete it from your phone, especially with free social apps. This is because tech executives use your data as part of their business growth metrics that are presented to investors at annual board meetings. There’s a harsh truth that we have all come to accept in the software industry—if you don’t pay for the product, you are the product. Software isn’t free, and people need to get paid.

Despite the harsh ruling against the company, Snapchat’s founders and investors still win and sex workers still lose. According to Politico, “The FTC didn’t impose a monetary penalty, but the company will be subject to independent privacy monitoring for the next 20 years. If it misrepresents its privacy or security settings in the future, it could faces penalties of up to $16,000 per violation.” That’s a small price to pay for a company now worth a reported $4 billion that was built on the naivety of the privacy-craving public.

I’ve never sold access to my Snapchat and after this ruling, of course I never will. I used Snapchat once with my husband while he was away on a business trip, but I was so freaked out after sending the pic that I deleted the app from my phone. I worried that my finger slipped and I accidentally sent the photo to someone on my phone contact list, or that the image would magically reappear in my photo folder, which is synched to my Dropbox, which is synched to the computer I code on during the day. Of course these fears never came true. Yet somewhere out there on a Snapchat server, there is a single upskirt photo of my vag. You are welcome, hackers.

Sex workers who use Snapchat for marketing or sales need to know that it is no more secure than the cam site on which they perform. They have to assess whether taking cam customers to another unsecured app is worth it. The difference between engaging with customers on a cam site versus Snapchat is that the cam site has security tools like user blocking and location blocking by IP address.

Although we can all make our own decisions about the technology we use to interact with customers, I think I’ll stay away from apps built by dudes who send e-mails telling their bros to celebrate a successful partying weekend by having “some girl put your large kappa sigma dick down her throat.”