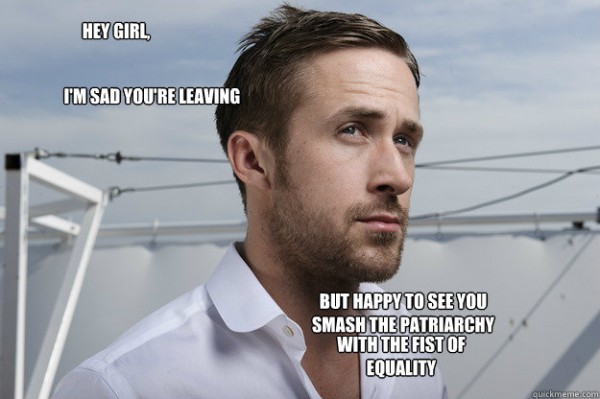 This piece was originally posted by the author on Medium. Content warning: the links in this post lead to articles detailing the rape and sexual assault of sex workers.

We need to talk about the ever increasing number of men like James Deen who utilize feminism as a marketable identity to cover up their abusive behavior.

When performer and writer Stoya tweeted that her ex, porn darling James Deen, had ignored her safewords and raped her, I have to admit I wasn’t terribly surprised. As a porn worker, I’d heard rumors that he was not necessarily safe to work with. Another ex-girlfriend, Joanna Angel, tweeted in support of Stoya. As of December 4th, Tori Lux, Ashley Fires, and an anonymous fourth woman have come out with statements on their own experiences of assault from Deen. Kora Peters and Amber Rayne spoke out about how he raped both of them on set on separate occasions. On Wednesday night, Joanna Angel went on the Jason Ellis Show telling the harrowing story of being sexually and physically abused during her long term relationship with Deen. With Nicki Blue coming forward yesterday, at least eight women have now made public statements about Deen sexually assaulting them. Additionally, Lily Labeau told Buzzfeed that Deen physically assaulted her and deliberately used elements from her “no” list while filming, while Bonnie Rotten recalled how he intimidated and ridiculed her on the job. Also notable is this older article in which Deen pushes sexual boundaries with writer Emily Shire during an interview, though this incident did not end with assault. Deen has responded on Instagram and Twitter saying Stoya (and anyone else speaking up) is making “egregious claims” against him, receiving support from his many fans. Kink.com has severed ties with Deen… a bit of a surprise considering their track record. (Nicki Blue noted that Kink.com actively covered up the fact that he raped her during a party at its Kink Castle headquarters.) Evil Angel also stated that it will not to sell any newly created scenes featuring him. And Deen has “voluntarily” resigned from his chairperson position at the Adult Performer Advocacy Committee.

Some people are already using this situation as proof that porn is abusive. I do believe that we need to discuss how the intersection of capitalism, patriarchy, and white supremacy entwine to create a particularly toxic environment in the sex industry, one of the only industries where an entry level “position” will usually pay women a much higher rate than men. People in the industry who have experienced rape, abuse, and coercion tend to stay silent for fear of losing work (as we saw in the case of Kink.com a couple years ago). People who do speak up are often harassed, victim-blamed, and blown off as being “drama.” Production companies and directors, including many cool “feminist” ones, often adopt the policy that if it didn’t happen on set, it’s not their problem. This is absolutely an issue and one that needs to be discussed and addressed seriously.

However, I do not want us to forget that we’ve seen this behavior before, in environments that have nothing to do with the sex industry, or even with sex at all. Remember Jian Ghoneshi? Remember Hugo Schwyzer? Or Hart Noecker? Or Kyle Payne? All supposed self-identified male feminists, allies, social justice writers, and activists. All accused of rape and/or abuse of women behind closed doors.

This is also about how much we value and encourage narcissism in men’s behavior. These men all seem to share narcissistic tendencies, whether they are diagnosable as such or not. Many of them, if not all of them, refuse to give up their space to promote voices more marginalized than theirs, something that would demonstrate that they are truly acting as allies. And many of them make a point of how vulnerable they are, how troubled, in order to ensure that caregivers are drawn to them like a moth to a flame. They can feed off of a caregiver’s empathy while ensuring that caregiver (most often a woman) doubts her own mind when she begins to worry that maybe she’s being manipulated.

Thinking about my own dating history, some of my most fucked up relationships were with men who “talked the talk.” The ex who threw me down a flight of stairs and terrorized me (and his mother) by throwing plates was heavily invested in feminist activism, spending most of his time volunteering for feminist spaces. The ex who used his sexual capital to keep his (often less privileged) lovers feeling insecure and unstable, who then gaslit and neglected them when confronted? He said all the right things about institutionalized racism and sexism. I stayed in these relationships because I believed these men were invested in fighting oppression. I excused their manipulations and their emotional abuse as mental health issues I just needed to be patient with. Perhaps they were trying to redress the imbalances of their privilege… but they certainly leaned heavily enough on it when it served them.

In both situations, these men emphatically discouraged me from speaking publicly on my experiences. Men who center social justice as part of their core identity can become dangerously defensive if their actions are critiqued. They are dependent on the women in their lives to cover for them so they don’t lose their feminist cred—and so they demand our silence. They depend on our own understanding of the failures of the prison industrial complex and the ways in which patriarchy hurts men to keep us from shattering their facade. To speak out anyway is terrifying and necessary, and I hope that Stoya has all the support she needs to speak her truth and begin to heal.

As for you men- want to do something about it? Talk to other men. Listen to marginalized people talking about their experiences, even if—perhaps especially when—the man accused “seems like a nice guy” or “is a friend”. You need to confront each other. You need to speak up when you see street harassment. You need to shut down rape jokes. You need to tell other men that talking about women like we’re sexual prizes to be won is not ok.

Don’t call yourself an ally. Be one.

Leave a Reply to Dark Roads | Sometimes, it's just a cigar Cancel reply