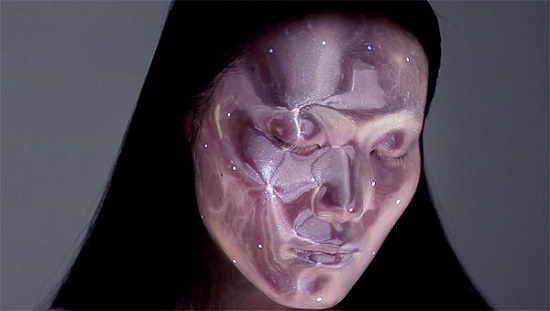 He was the perfect client. Well dressed and freshly showered, he brought me a small gift in which my precious dollar bills were discreetly enclosed, and our session finished before I was even fully undressed.

“How did you find me?” I asked him over cacio e peppe. I needed to recreate whatever marketing techniques scooped this guy for the rest of my career.

“I’ve been following your Twitter for years,” he replied.

My whore brain, which is really just a saloon girl holding an abacus after seven years of doing this job, quickly ran a rough estimation of every dollar I had lost by somehow failing to convince Mr. Right to get in touch sooner. He sensed the twinge of disappointment in my surprise. “Your photos are great!” he corrected, “I just…never understood the whole ‘hiding the face’ thing.”

My heart sank. There’s simply nothing that competes with the magnetism of the human gaze in a sea of faceless profiles, and it’s something I’ve heard from clients before. In sad contrast to a warm smile, my feeble Photoshop techniques for obscuring my identity can give my images the uncanny valley effect of an alien shapeshifter caught briefly between corporeal forms. While my areolas are available to the world in high resolution, my face is just something I can’t—or won’t—expose.

Industry professionals who do online advertising are noticing that an increasing number of their colleagues have forgone the usual online security measure of hiding identifying features like faces and tattoos, opting to share all of the above plus apartments, city views, and even cameos from their dogs. In a city of millions, I’ve unintentionally run into workers who I can identify only from their online profiles. This trend that unquestionably puts workers at greater risk is troubling for many. It’s a phenomenon that coincides with ever-more-restrictive criminal laws on prostitution, a lack of reliable advertising options, and an unrelenting global media culture that frames privacy as a puritanical, outdated value. Historically unprecedented invasions into our private lives are now commonplace and increasing, and the pressure to truly ‘bare it all’ in order to compete is palpable. The repercussions for sex workers, though, reach far beyond what regular civilians face.

END_OF_DOCUMENT_TOKEN_TO_BE_REPLACED

At this point in the SESTApocalypse, as I finally emerge from the paralyzing fog of wtf-wtf-wtf around the death of our business model, we’re all sick of thinking and talking about it. We’re sick of wondering how the hell we’re going to manage, sick of watching high-end workers become paranoiac internet security experts, sick of low-end workers being driven back to the streets. We’re sick unto death of the media requests, media requests in our inboxes but no money, media requests just as blithely uncaring about outing us as always, media requests which cheerfully expect a response that night before the news cycle stops giving a shit about hookers. (Oh, but could you connect us to someone even more abjectly fucked than you? Could they talk to us in between dodging assault as they re-acclimate themselves to the shittiest and most dangerous sort of desperate street-based work? How do you feel about your imminent impoverishment, the obsolescence of your only survival mechanism, and your bleak and possibly nonexistent future?) And when we do accept these media requests and bravely strive to make ourselves understood—when they don’t just quote our snarky emails refusing the most ignorant ones without our permission—we’re sick of the coverage that results, always appearing underneath that sickeningly familiar synecdoche for us, those disembodied legs in thigh high boots leaning over a car under a streetlight.

We’re understandably sick of it all as we attempt to keep body and soul together in this new landscape, but I feel I have to write a eulogy for Backpage.

Alas, poor fucking Backpage. I’m not crying any crocodile tears on your grave—your owners can sit and stew in the hundred charges in their indictments and take that instead of true justice for cynically profiting off a criminalized population—but I will lament what you meant for us.

We’ve lived with you under threat for so long, your demise hardly feels real. From innumerable lawsuits to credit card companies cutting ties with you to Senate hearings to your flagrant strikes for free speech, it seems like something has always been promising to put an end to you. But you persisted.

Personally, I was with Backpage from its murky beginnings to the end of the line. I advertised in a print ad in the back of an alternative weekly back in the aughts when Backpage founders Michael Lacey and Jim Larkin’s company, Village Voice Media, owned a large swathe of those weeklies. I paid $200 every two weeks for that ad, $160 for a week if I couldn’t manage to put together that $200. $200 for 100 characters, briefer than a tweet—no pictures. I had to walk into that newspaper office personally to deliver the cash, forget any concerns about outing (oh, yes, kids, and I walked uphill in the snow, both ways).

It was this crude newspaper model, these back pages only a few escorts could advertise on, which would eventually become the much more accessible Backpage. (Larkin in an internal company document, as quoted in the unsealed Backpage indictments: “We have with the Village Voice probably the longest run of adult content advertising in the United States and it is, like it or not, in our DNA.”) In fact, Lacey and Larkin initially used Backpage’s revenue stream to keep those alternative weeklies alive in a newspaper industry that was failing even then, in the late aughts and early tens. Though, as anti-trafficking discourse intensified nationally, Village Voice Media came under new ownership which denied any connection, financial or otherwise, between their high-minded journalism and Backpage’s taint.

(Though now both independent print journalism and online escort advertisement are dying models, so we have something in common again.)

END_OF_DOCUMENT_TOKEN_TO_BE_REPLACED

When I first identified “The Stormy Daniels Effect” here at Tits and Sass, my theory about the power of sex worker class-consciousness, the Stormy Daniels media cyclone was just beginning to brew. This week, after her 60 Minutes interview on Sunday night, it briefly became a full on news cycle shit storm. Commentary on Daniels ranged from sex worker-penned think pieces praising her as a “hero of the opposition” to the never-ending parade of trolls calling her a “whore,” “slut,” and “ho” on Twitter. There was also a slew of pedestrian commentary on mainstream media sites, including tired retorts to Daniels’s press coverage that claimed her sex work is evidence of moral and intellectual shortcomings. My favorite came from an anonymous troll who goes by the name mason B: “awwwwwww the HO’S [sic] have a national voice now isn’t that nice?”

That Daniels is considered a dumb whore on the one hand and a savior on the other is pretty telling—in our culture, we want our sex workers to occupy uncomplicated little boxes. Leftists and right-wingers alike want sex workers to fit into one of two wildly different narratives. More to the point, it is not lost on most sex workers that while some Democrats and progressives praise Daniels, it was, nevertheless, Democrats and progressives who just fucking passed FOSTA.

END_OF_DOCUMENT_TOKEN_TO_BE_REPLACED

As Black History Month draws to a close, we thought revisiting Peech’s seminal essay on Maya Angelou would be appropriate.

Dr. Maya Angelou, American Poet Laureate, most famous for authoring I Know Why The Caged Bird Sings, passed away at age 86 on May 28th, 2014. Her literary agent Helen Brann confirmed the news to press, and thus began a worldwide outpouring of grief. The top trending tag on Twitter was “RIP Maya Angelou” and, at the time of this writing, it is one of four Maya Angelou-related trending hashtags. She is hailed as a national best selling author, a genius, a spiritual God-, Grand-, and mother. She is lauded as everything Black women should aspire to emulate in life. So why is it very few of us know she was a sex worker in her youth? Why is it, even in her death, as in her life, it’s such a guarded secret? Why was this secret kept by seemingly everyone except Dr. Angelou herself?

We can, once again, boil it down to respectability politics and stigma. I am angry about it. I find myself ruminating, considering, wondering: If her work had been talked about as much as her dancing with James Baldwin or even her considerable, commanding, and lovely height of six feet, what would the sex work community look like today? If we had talked about her wonderful compassion for sex workers, how she never looked down on them, and her refusal to be intimidated by invasive and obnoxious questioning about her sex working past, what would sex workers around the world be saying today in memory of her life?

Instead, we read post after post, obituary after tribute, calling her a “pimp” and saying she had “an unsuccessful stint as a prostitute.” The most detailed accounts currently online are making sure to emphasize that she spent a “brief stint,” a “short time” in the sex industry, so as to, without explicit words, solidify the shame they believe she should have felt, the shame we should feel as well. The media uses inflammatory terms to get clicks and to emphasize the terrible and shameful secret that was, in actuality, never a secret at all.

Dr. Angelou herself says she was never ashamed.

END_OF_DOCUMENT_TOKEN_TO_BE_REPLACED

Whether the pair engaged in sexual activities or not, there is an undeniable connection between sex workers and rich, powerful men.

After all, seeing a sex worker implies a degree of economic freedom. That politicians in the United States tend to be rich, powerful men is perhaps a different conversation entirely, but it is not hyperbole to say that sex workers in this country have the capacity to ruin these men, but not for the reasons most might think. Indeed, the claim that sex workers can ruin rich, powerful men in this country is a loaded statement, particularly if “ruinous” is defined as simply holding onto kinky secrets.