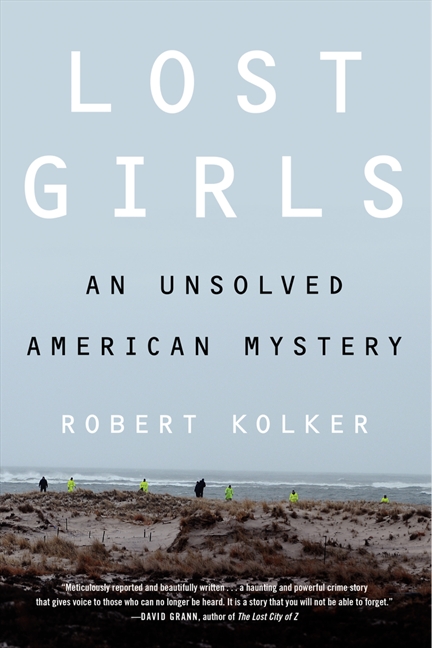 The search for the supposed Long Island Serial Killer began in December 2010, when the bodies of four women who had worked as prostitutes were found in the course of the search for a fifth who had disappeared that May. No suspect has been found to date. I spoke with New York contributing editor Robert Kolker via chat to talk about his first book, Lost Girls, which is a study of the five women who disappeared there and their surviving friends and family. Chat edited from its raw form.

Bubbles: Did your personal attitude about prostitution/prostitutes change a lot over the course of reporting this book?

Kolker: When I first reported on the serial-killer case, I was coming into the subject with no real knowledge of sex workers or sex work. In hindsight, I had a lot of preconceived notions. My first impulse, as a reporter, was to join the crowd and try to report on the whodunit aspect of the case. I didn’t occur to me to learn much about the victims at first because I assumed, naively, that they had no stories at all—that they were “dead” long before they were really killed. (I actually thought of Season 2 of The Wire, in which the bodies of trafficked girls are found in a shipping container. I thought these women were like that—people who were social outcasts who might never be identified.)

Then I quickly learned they all had families, of course, and loved ones and friends. And as I got to know the families I realized that sex work, in part because of the Internet, attracts a very different sort of person from the stereotype. I wanted Lost Girls to be about that change—about the lives of these women—as much as I wanted it to be about the case itself.

About that change in their lives?

About the change in the world of escorts. How the shift from outdoor to indoor sex work has allowed a wider variety of people to find the work appealing.

The ease of entry.

Now, I’ve talked with plenty of escorts who say that the Internet has actually made their work safer—that they can do background checks on clients and so forth—and so I didn’t want this book to beat up on the Internet itself. But I do think the field has changed and the professional challenges have changed, even as the risks remain in place.

I looked at the Facebook memorial group and was wondering if interacting with the families/friends via social media was different from other subjects/families you’ve talked with. It seems like it would add a layer of that internet-friendship-thing. You’re also privy to lots of Facebook drama that way.

Does it feel different to report on people when you watch them interact with you and each other online like that?

Facebook conversations occupy this weird new space for reporters. It does feel different to report on a “scene” that essentially takes place in a chatroom (or in this case a victims’ memorial Facebook page). But that was the world they communicated in, of course, as we all do. The family members I write about in the book first met over Facebook, essentially, and as time went on they continued to communicate with one another that way. So it was clear to me that their Facebook interactions would make up an important aspect of the book—illustrating just how their relationships evolved.

This book is about a lot. You’ve got the way the Internet changes commerce and socialization, our collapsing service economy, attitudes towards commercial sex, class.

Yes—and the aloofness of law-enforcement.

Were they more invested in weathering the publicity than solving the murders?

I think the police in Long Island were at a disadvantage from the start, because by the time the first four bodies were found, the disappearances of those women had been roundly ignored for months and in some cases years. So they were way behind, and they seemed to be playing defense as far as PR went. I do think it’s accurate that they were as worried about the publicity as they were about the case. And if the victims had come from a different class of people, things might have been a little different. There are moments in Lost Girls where the police bias against escorts is explicit. And beyond the book, I’ve learned that they were reluctant to offer legal immunity to sex workers who they wanted to question about the case. And as you can imagine, without immunity no escort would ever want to talk to the police. So that’s a big problem.

Right, I remember that the community had to explicitly lobby the DA to offer immunity to sex workers then. Is Oak Beach as strange as it seems? Joe Brewer [the last client to see Shannan Gilbert] in particular blew my mind, because he seemed to be telling you that he had extra-important information that he had withheld from investigators.

The media described Oak Beach as a secluded, gated millionaires’ row. It’s true that it’s secluded, but it’s not a wealthy place like the Hamptons or Fire Island. Many of the people there have been there for generations and the value of their homes has skyrocketed, and so they are wary of anyone who might want to spoil that for them. To me, that’s at the heart of what seems like their utter lack of empathy for Shannan Gilbert, who disappeared in their community. Beyond that, the people there are very particular: It takes a certain sort of person in the NYC metro area to want to live a 20-minute drive from a supermarket or gas station or even a convenience store. I came away thinking these were people who wanted to be left alone, or, in the case of Joe Brewer, feel like a big fish in a small pond.

My interaction with Brewer was really strange. He kept hinting that he might know why Shannan was so frightened that night, but then he kept backing away from that claim. I couldn’t tell if he just wanted money from me to tell him, or if he was trying to make himself seem important. But at no time did he ever acknowledge that he played some part in what happened to her. He doesn’t even call himself a john. Which to me is pretty remarkable.

Didn’t call himself a john in the sense that he thought he wasn’t paying for sex?

Brewer insisted he just wanted company that night and that he and Shannan never slept together. Not exactly credible.

And Peter Hackett [a former physician whose stories about the night of Gilbert’s disappearance were ever-changing]—where does the civil case against him stand?

Hackett’s lawyers have filed to have the case dismissed, but that hasn’t happened yet. I say “yet” because Shannan’s family’s lawyer acknowledges that this case is an uphill battle without sworn depositions from neighbors to back up their claims. Perhaps the most they can hope for is that one or two key people are deposed under oath before the case is dismissed. Then the lawsuit will have done more than perhaps even the police investigation has to get to the bottom what happened to Shannan Gilbert. What Shannan’s family really wants, though, is to pay for an independent autopsy. But they don’t have the money.

Do they want to do this to establish that she was a homicide victim?

Yes—they want to test for evidence that someone else drugged her that night, and for signs of a struggle or a fight or homicide—anything suggesting foul play.

And the police were so certain there wasn’t foul play that none of that was done?

They have a theory that she was hysterical and ran into the marsh. Mari [Gilbert, Shannan’s mother] and her lawyer don’t think the police care to find out anything that would dissuade them from this theory. And in this way, I would agree that the police seem to be conveniently ignoring (1) how Shannan was lucid enough to stay on the phone with 911 for 23 minutes, (2) how Shannan said explicitly that someone was trying to kill her, and (3) her clothes and belongings were found hundreds of yards from where her body was found. They are so invested in the myth of the hysterical prostitute—that Victorian notion that Shannan just swooned and fell over—that you can argue that they just have tunnel vision.

You come to the conclusion that criminalization of prostitution is harmful. Do you think decriminalization would have made a difference in how this played out?

I did come away feeling that predators target people who are vulnerable, and what made these women vulnerable is that they worked in the shadows. The Internet might have put them on the grid, but ironically it also isolated them, so they hid what they did from view. No one close to them knew where they were at different moments, because their whole lives were so secretive. I think that for generations, we’ve tried stigmatizing sex work and we’re tried (many of us) pretending it just doesn’t exist and the people who do it don’t matter. None of that seems to have had any impact on demand for commercial sex. And that attitude turns women like this into targets for violence.

There have to be ways of protecting sex workers even if their behavior is technically criminal. Law enforcement should provide safe havens for people with minor offenses. Think of the violent people who could be prosecuted if sex workers felt they had allies in law enforcement.

Did you get any sense at all from any of the members of law enforcement you spoke with that that could be a possibility?

No, not at all. On the contrary, the chief of detectives in Suffolk County at the time (since retired) tells me in the book that these women all were killed because they were greedy.

Did you spend much time looking at the escort review boards? One opinion we’ve heard in our discussions of them on Tits and Sass is that they add a layer of protection and community for women in the industry. The Internet can isolate, but it can also create community for marginal populations.

That’s a great point. I have a line in the book about how so many escorts in the age of the Internet work alone, and that a missing person is missing only to those who notice. I completely agree that the flip side of the Internet is the potential for community.