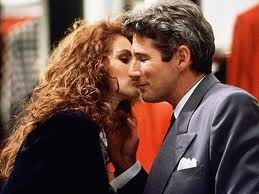 There are a million implausible moments. The scene in which Vivian and Edward run into Kit’s pimp is Crocodile Dundee levels of ridiculous, and the white knight climbing up the fire escape ending is utter dreck. But frankly, I don’t care about the standard criticisms of Pretty Woman. It’s less sexist than My Fair Lady and yet no version of “Pygmalion,” including that classic musical, takes as much flak as this one. And that makes me suspicious. Beyond the obvious pleasures of songs like “King of Wishful Thinking” and insane late ’80s women’s wear, let me outline a few of my favorite aspects.

Vivan’s giant curly hair. I am a naturally curly girl and never once in my adult life has my hair been in style. It’s all blowouts and permanent relaxers for me for the foreseeable future, at least until I’ve seen a client enough times that they’ll think seeing my natural hair is being let in on some intimate secret about me. But part of Vivian’s transformation involves her flaunting her armload of curls around Richard Gere like it’s a mink stole. This is pro-curl propaganda and the world needs more of it.

The movie acknowledges a prostitute’s right to say no. It’s important that non-sex workers be reminded that sex workers can be disrespected, sexually assaulted, and raped. The scene where Stuckey (Jason Alexander) attacks Vivian is chilling, all the more so because he’s calling her “whore” and talking about his right to buy her as it goes down.

America’s sweetheart plays a prostitute who doesn’t end up dead. It’s nothing new for serious actresses to take sex worker roles. (See: Elizabeth Taylor, Shirley Maclaine, Jane Fonda.) And they don’t always die, or even suffer extraordinary humiliations. But this is Julia Roberts, she of the mile-wide grin, and we see her in thigh high boots, groping Richard Gere’s penis while telling him it’ll cost him $100 an hour for her company. That casting choice, at that time, virtually guaranteed audience members would immediately like her character. They aren’t going to find Vivian gross or morally offensive. Because she comes in the Julia Roberts package, they’re going to think she’s sweet, charming, and deserving of a happy life. Of course not every person who watched the movie woke up to the fact that non-Julia sex workers also deserve respect and happiness, but even a little bit of compassion is a good first step. Importantly, she is never punished for being a prostitute, which is rare in films—unless you count the attempted rape as a punishment, which I don’t. If the rape had been successful, that would have felt like a punishment. But then we’d have Leaving Las Vegas on our hands.

THE SHOPPING SCENE. The culmination of the shopping side story is pure, concentrated joy, no matter how many times I watch it. It’s not like I grew up dirt poor, or poor at all, but I grew up in a community where the other families had a lot more money than mine, and it was always obvious to them and to me. It’s shitty to be treated like you’re worth less because you have less and there’s sweet gratification in making a snobby person face the negative consequences of their bigotry. Sadly, in real life, there often aren’t any negative consequences—at least none that are readily apparent to the bigot. The shopping scene is cathartic because Vivian does what a lot of folks only fantasize about doing; makes an asshole confront their own assholery. And my God do we hate those shop girls for being mean to a prostitute.

Which brings me to another point, the movie distrusts rich people. Edward’s business practices make him villainous. For most of the movie, he is an unsympathetic character. Edward needs Vivian more than she needs him—there’s some truth to her stupid “she rescues him right back” line at the end—and she’s rewarded for making him a happier person by living a life of luxury. It’s a problematic “having your cake and eating it too” resolution; Vivian’s blue collar-ness is what made her better than him, but because she’s better, she’s lifted out of a blue collar life. The fact still remains that the audience is encouraged to cheer on and identify themselves with Kit and Vivian, two street workers, as opposed to the stuffy millionaires who populate the rest of the film. We laugh when the ladies use their sexuality to provoke and startle, rather than tsking in disapproval or disgust. We’re on their team.

Not all of the movie is impossibly far-fetched. I’ve written before about clients and escorts getting married. And while I agree that Vivian’s insistence on having “the fairy tale” is vomitous and trite, most of the mainstream criticisms of Pretty Woman, particularly from the anti-prostitution crowd, carry nastier messages than the movie itself. The idea that a prostitute, especially one who works on the street, could be as pretty as Vivian, as good-natured as Vivian, or as drug-free as Vivian, is often treated as outrageous*, as is the idea that there are clients like Edward. This last part really baffles me, because why would anyone think that dickish rich guys aren’t seeing prostitutes? Or that uber-rich guys don’t deign to curb crawl, or that wealthy clients don’t get off on “spoiling” some of the girls they hire? I guess part of it has to do with the belief that clients must be ugly, trollish men no matter how much money they have?

The most common (stupid) complaint is that the movie glamorizes prostitution, which it doesn’t. It opens with a prostitute being found dead in a dumpster, and Vivian blurts out to Edward that she’s “like a robot” when she has sex for money. Vivian decides to leave the life after her week with Edward, in spite of not yet having his financial support, and she tries to coax Kit out of the work too. I’m sure there are some militant whores out there who think the movie isn’t nearly pro-sex work enough.

I am not going to give up loving Pretty Woman though I will continue to skip the movie’s obnoxious end. You can selectively refresh your own memory by watching the entire thing on Youtube. (Psst, I know a guy.)

*Granted, not many women in the world look like Julia Roberts, prostitute or no, as Michael Bluth would say. But few people in American mainstream films look like “normal” people. When J Lo plays a maid in Maid in Manhattan, I imagine most viewers understood it was in service of a Cinderella story, which is inherently improbable, and they don’t feel compelled to rant about how being a maid was glamorized or how all maids are really gross and ugly and there’s no way one would be as pretty as Jennifer Lopez. (Confession: I have never seen Maid in Manhattan. I do have my standards. When it comes to commercial movies, put a sex worker on it or I’m not interested.)