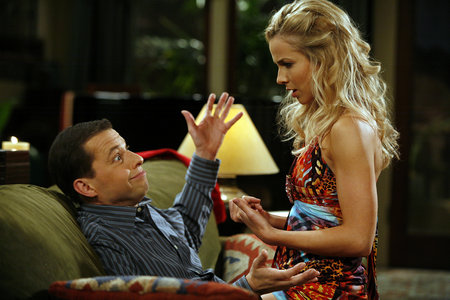 I don’t purposefully watch “Two and a Half Men,” but like many popular sitcoms, it eventually becomes part of the cultural atmosphere and thanks to the public ubiquity of TVs, even the unwilling breathe it in. I first caught wind of an episode involving a prostitute when I was with a client. (Of course.) He turned on the TV in his hotel’s sitting room and then we retired to the bedroom. It wasn’t long before I started hearing the sounds of “hooker!” floating in. I think my guy was too wrapped up in my feet—figuratively; my feet aren’t quite that big—to notice, but I was aware and slightly embarrassed. Related: this one time a client and I went to see Cedar Rapids during our long weekend and ended up sitting through scenes featuring a sweet, hotel hustling lady who, if memory serves, has the obligatory “you think I like going with all those different guys?!” moment. Awkward! Dear World: when I’m playing girlfriend to a client, I need you to erase any and all references to prostitution because it makes us both feel weird. Kthanx.

Anyway, the next time I happened to be in the vicinity of a TV tuned to “Two and a Half Men,” I had a feeling that fate was about to be kind and hit me with that “hooker!” episode again. And sure enough, it did. Surprisingly, it was not as terrible as I anticipated.

You don’t need to have an extensive history with the show to deduce the situation. Charlie Sheen is a freewheeling playboy (possibly unemployed?) who lives with his uptight, nerdy brother, who has a son. Thankfully, the son is irrelevant for our purposes but I figured I should mention it, lest you think the “and a half” refers to Sheen’s massive penis or something. The show opens with Charlie Sheen talking with Not Charlie Sheen (NCS) about the possibility of hiring a lady. NCS has had the Chester Brown-like epiphany that  because he isn’t interested in a relationship, he might as well satisfy his sexual needs another way. He wants to hire someone for $200 but Charlie Sheen informs him that this is a guaranteed way to get carjacked and an STI. A bit harsh, since in lots of (small) cities, that’s not far off the usual incall rate. But in Sheen’s world, it’s more reasonable to spend $1500 for an hour and endearingly, Sheen says the price is well worth it. Damn straight! We’re worth whatever we ask for, even when a longer date ends up totaling what most normal people would spend acquiring a gently used four-door. (Do these characters live in LA? Let’s just say they do. And it must be pre-recession LA because all my friends there tell me that business these days is crap.)

So Sheen agrees to find someone for his brother, and the sarcastic housekeeper picks up on this right away and embarrasses him by being unfazed and kindly saying, of the girl who will eventually be hired, “talk about earning your money.” Ha! Everyone knows that NCS is insufferable. The housekeeper then asks Sheen to find her a guy for hire, which is an episode I would have really liked to watch. Eventually, a young woman (“Alexis”) agrees to spend an hour with NCS for $500, but Sheen explains that NCS will have to tip extra for anything unusual. To much laughter, NCS says “oh yeah, I’ll have to tip her,” even though this guy clearly has the sexual imagination of sea coral. Exit Sheen and a half so NCS can pop his paying for it cherry.

But oh no, what’s this! Some next door neighbor shows up while he’s waiting for Alexis. Weirdly, NCS is completely upfront with his neighbor and tells her that he’s waiting for a prostitute, so when Alexis does show up, the neighbor gets to cordially say, “Hello, you must be Alan’s prostitute.” (Ok, I admit it, I know his real name! I am ashamed. But it’s only because I found out while googling for images. The name of the episode is also “Winky Dink Time.” There, are you happy?) The neighbor exits and Alexis asks Alan to take care of business first, which is a terrible position to be put in—just give us the money up front please, guys, without having to be prompted—and then Alan says, “Oh yeah, it’s $400, right?” That ass. Who tries to get cheap with service industry professionals? Morons who want their soup spit in, that’s who.

Alexis isn’t having any of it. She gets what she’s owed and promptly mounts him and starts moaning about what a great kisser he is and how turned on she is. Alan interrupts her and is like, “I know women don’t get turned on that quickly. It needs to be more realistic.” I can’t blame him for that. I’ve worked with an Alexis-type before, and she was really sweet, but it just seemed disrespectful to me when she stroked the flabby front of this 40-something guy and cooed, “ooo, your chest is so sexy.” We all know our faults, right? I wouldn’t want some guy crunching up my outer thigh flesh until it’s ripply and gross and then saying “Wow, you’re like a swimsuit model.” That’s some sorority level mind game shit.

Anyway, then there’s a cutaway to Sheen and A Half out on a double date, then it goes back to Alexis, who is storming down the stairs, and Alan, who is protesting that he knows for a fact he is not the “biggest” she’s ever seen. Alexis tells him he can keep his money and that she’s leaving, and Alan is happy because he got to second base for free. The end. And a decent one since prostitutes are shown as relatively presentable and personable people with enough autonomy and self-respect to turn down dates with obnoxious guys. I approve. But I know what we’re all thinking: how would this have been handled if Ashton were already installed in the Charlie Sheen role? Alan probably would have been in store for a healthy 20-minute lecture and little A Half would have had to sit through it too. Not like this show is so hilarious as is, but that plot line is markedly less amusing.