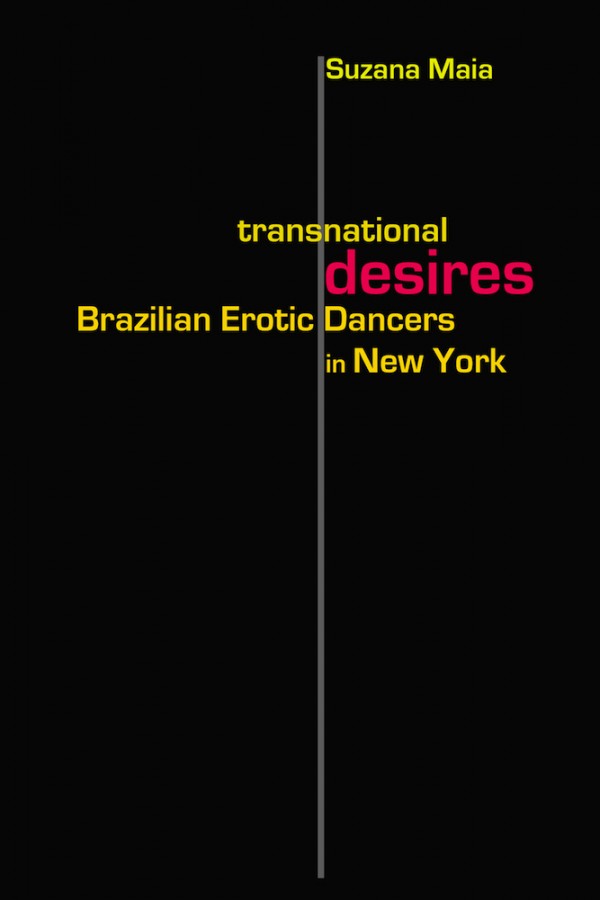 The similarities stop there. Maia saw herself in many of the Brazilian middle class dancers she so passionately describes in the book, whereas I haven’t yet met another South Asian or Muslim dancer in four years of dancing. Maia chose to write about strip clubs as an observant ally and outsider, and she never danced. I, on the other hand, focus on an entirely different subject in my academic work. Stripping keeps me entertained and helps pay my bills. I’m not doing my dissertation on strip clubs, though friends often inquire why not. Maia sees herself as ambiguously positioned between the United States and Brazil. For me, the U.S. is certainly home.

A reader might be surprised to see a lack of citations from the so-called “sex worker rights literature” in this book. For Maia, this is a deliberate choice, as she resists reducing these women to a static “sex worker” identity. The book is about more than just what happens in the strip club for Brazilian dancers. Maia explores race, colorism, downward class mobility, and cultural citizenship as she traces the journeys of nine dancers. She asks why middle class Brazilian women, often highly educated, choose to move to New York and work in the adult entertainment industry.

Maia is an ethnographer and an anthropologist. As such, she is interested in the day-to-day lived experiences of the nine dancers whose lives she so vividly describes. While she does spend time on the floors and in the dressing rooms of strip clubs, she also goes to the beach with these women, is invited to their weddings, and occasionally even accompanies them on outings with client/customers. Because they are part of her social world, Maia candidly expresses reservations about their dating choices, discomfort with their use of racist or classist language, and moments of intimacy and trust between them. She is not an objective social scientist looking in from the outside. As a middle-class Brazilian immigrant to New York City herself, she relates intimately to these women. Her use of ethnography is critical to this project, and she describes how formal interviews yielded flat, often stereotypical responses that did not provide the depth and honesty that her extended friendships with these dancers did.

Much of the book explores these women’s reasons for migrating to New York in the first place. The women she chooses are part of an unstable middle class in Brazil that is reeling from the effects of structural adjustment and the loss of the dream that Brazil would become part of the First World. With their elite social standing in jeopardy, these (mostly) highly educated women find themselves on circuitous routes to New York City’s gentlemen’s clubs, where off-the-books earnings allow them to send money home or make the consumer purchases Brazilian elites had become accustomed to during the boom years.

Brazilian discourse celebrates the racially mixed population of Brazil, but this rhetoric is far from reality, where fair skin and privilege go hand in hand. The economic downturn in Brazil led to a concern with “racial purity” as fair skinned privilege became increasingly insecure. For the migrant middle class women in this book, presenting themselves as the racially mixed (but not black) morena is a critical part of constructing their notion of self in a transnational socioeconomic context. This separates them from the darker, hypersexualized mulata who has African blood. The morena is “exotic” enough for commodification in the U.S. sex industry. The bodies of these women are post-colonial, and they are aware of the ways they must market them. “The evocation of an exotic sexuality becomes a dancer’s work,” Maia says (89). In this way, Maia adds to a growing body of work that documents the ways race—as a tangible asset or liability—affects women in the sex industry.

Maia finds a surprising honesty among these women, for whom marriage, romance, and sexuality are nothing like the traditional aspirations that women are “supposed” to have. If anything, what Maia unearths is a critical feminist approach to relationships with men, an unapologetic sense of using the objectification of the brown, female body to one’s advantage. Sara tells her that men “should pay for their inherent gender privileges” (134). Often, men will pay dancers for dates. In many instances she describes, Maia does not explicitly tell us whether these women are engaging in sex with these customers—perhaps because the dancers themselves aren’t totally candid about this. As these women’s visas expire, they often turn to paid marriages that allow them to stay in the United States. Others find marriage partners who are desirable stepping-stones to American acceptability. Affection, romantic love, and passion rarely shape their decisions to marry or migrate.

While I stuck around at a Manhattan strip club for more than a year for reasons of money and glamour, Maia found it a difficult place to conduct her research, though she spends some time in a Manhattan club with Nadja. Astoria bars cultivate a more open, neighborhood vibe, while in Manhattan she not only feels uncomfortable but is actually asked to leave the club. As always in anthropology, elite spaces can be the most difficult to study.

Maia’s work highlights how in-between, how liminal the experiences of these women are. In Brazil, they’re relatively elite. In the U.S., they are branded undocumented immigrants, women of color, and strippers. As morenas, they are not-quite-white, but certainly not black. They live, sometimes without legal documentation, in the United States, a place that may or may not become a permanent home. And the Brazil they may return to is never, ever the same.