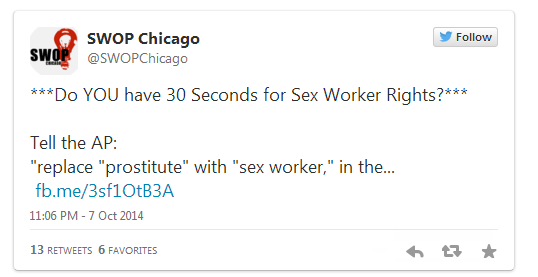 The Daily Dot covers an online campaign to have the AP style book replace “prostitute” with “sex worker.” Want more on this? You’re in luck, as Tits and Sass will be running a series on sex worker nomenclature, including posts debating the merits of “prostitute” vs. “sex worker.”

Monica Jones is still fighting her case in court over a year after being arrested and funneled into her own school’s diversion program, but the flaws in Project ROSE are becoming more apparent and more public.

Government officials and social workers need to come to terms with the fact that the victim/criminal binary simply doesn’t fit the majority of underage sex workers, points out Elizabeth Nolan Brown.

Another Christian anti-trafficking organization is using sex workers as labor for their tacky little products, and the products as a metaphor for the reformed sex workers’ transformation from something no one wants into something beautiful.  Such empathy!  Wow.

The Daily Mail appears to be having a slow news week, as Amanda Goff hugging a football player she ran into at brunch was judged newsworthy. (Amanda Goff made headlines earlier this year after outing herself and writing a book about her work as an escort, to much handwringing over the psychic damage this revelation will do to her children).

Trans sex workers in Pattaya, Thailand are being targeted by the police as part of an across-the-board morality drive:

Officials in Pattaya say they need to be seen to be doing something to scrub up the city’s reputation before the army is tempted to intervene in ways which local officials say might be bad for business.

More on the five year study that resulted in its researchers having the revelation, “Sex workers! they’re a lot like us!” Still, as fatuous as that comment was, the study is a nice respite in a week dominated by anti-trafficking organizations: its findings show that most sex workers are not coerced.

Backing this up is yet another report from Operation North Star: police officers in Regina also found that sex workers were working because they wanted to (despite the police interviewers’ apparent inability to accept that fact.) Guess it’s just that hard to accept an escort’s word at face value.

Just after issuing a warning to sex workers in the St John’s area to be on alert for groups of men, Safe Harbour Outreach Program received an anonymous donation of $20,000.

Rising rents in Vancouver have made affordable housing for sex workers a pressing problem.

There’s been speculation about where the sex workers evicted from the Dolly district of Surabaya would go, and it appears a small group have gone to Papua.  Papua is less than thrilled, claiming all an HIV epidemic is imminent.

A new study models ways to address growing rates of HIV infection in Mexico by targeting male sex workers who have sex with men.

Even a story on the Hong Kong protests can take a detour to interview a sex worker, though admittedly she hasn’t been to the protests—some of her clients have. It’s now the turn of journalists in Southeast Asia to express their astonishment over sex workers’ ability to use the internet.

A new Cambodian documentary, “Karma”, is about two transgender sex workers and their lives on the margins.

Remember former dancer/club owner/management shill Angelina Spencer’s dismay over that Daily Beast article about strippers and legislators working together to protect dancers in Oregon? Here’s her first attempt at recovering from that: talking up COAST (Club Owners Against Sex Trafficking). Oh, please.

Criminalizing consent, as C-36 would do, is dangerous for many reasons and will have long term negative effects, warn Sarah Hawkes and Kent Buse.

The Irish Examiner interviews reality tv performer Kate McGrew on what it’s been like for her and her family since she came out as a sex worker.

A sexual health educator explains why sex workers may not report assaults to the police:  they’re afraid, as historically police have not been supportive (to say the least) of sex workers human rights.  Surprise!

Want to see something absolutely disgusting and outrageous? OK, but don’t say I didn’t warn you.

A group of strippers sued Washington state’s Pierce County on Tuesday, saying they don’t want officials to release their business licenses – and their real identities – under a public records request.  The complaint was filed by two Jane Does in U.S. District Court in Tacoma on Tuesday on behalf of about 70 dancers and managers at the strip club Dreamgirls at Fox’s, as well as any former dancers.