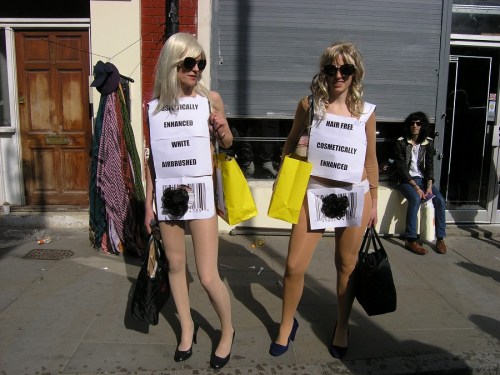 There’s going to be a Muff March in London on Saturday. The cause? Protesting against cosmetic surgery for women’s gentials. The other cause, protesting against the removal of pubic hair, is a little harder for us to get behind, but at least some of us here at T&S would welcome the return of the bush.

Prostitution may soon be criminalized in France.

Two San Antonio clubs returned to court to argue against the city’s ban on nude dancing before the Fourth Court of Appeals. The ban was put in place by San Antonio’s amusingly titled Human Display Ordinance.

The Dallas Observer has a lengthy feature on why strippers in Dallas are not in a rush to gain employee status. There’s also a piece on Strip and Grow Rich sales guru Rebecca Avalon.

Police discovered a pocketbook and clothing on a Long Island Beach. They believe the items belonged to Shannan Gilbert, one of the suspected victims of the Long Island serial killer who went missing in May of 2010.

First Spud Webb was going to coach Stripper Basketball and then he said he was just joking. Not cool, Spud.

HIV activists in Botswana are advocating for the legalization of sex work.

An Indianapolis cop was arrested for performing sexual acts inside a strip club—while he was on duty.

Amy Tan is about to release a new novel, Rules for Virgins, whose protagonist is “an aging courtesan in 1912.”

The Land of the Sweets: the Burlesque Nutcracker opens next week in Seattle.

Wendy Dickey, the mom who dressed her 3-year old daughter up as a prostitute for Toddlers and Tiaras, is still defending her costume choice: “It was comical — it was meant to be comical. The outfit was not sexy, it was tacky and hideous and it was comical.”