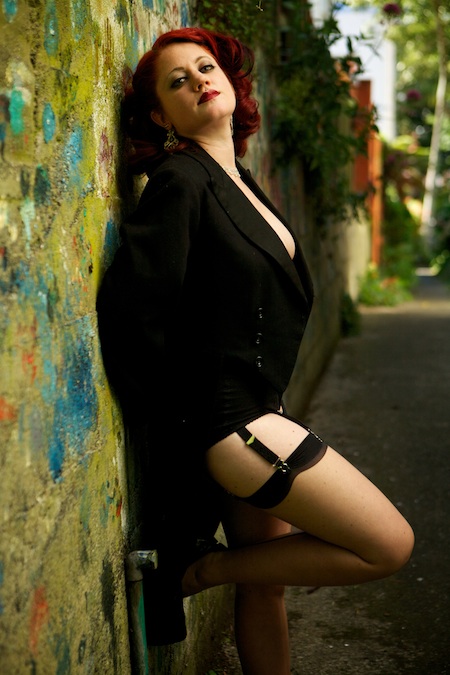 She—and you may have noticed my reliance on this pronoun; ‘tis because I’m not entirely certain what to call her; Lucy/Anita/Rachel are all the same woman; I’ll go with “Rachel” for no real reason—tells her story in ebullient terms. The women who interviewed her at the brothel she chose is “lovely!” The women she worked with were “the loveliest! The most charming!” The brothel itself is “grotty” but “sexy!” It’s also “lovely!” There’s no end to Rachel’s genuine enjoyment of her part-time job, which she narrates to us in great—sometimes intentionally excruciating—detail.

The spine of the show is Rachel guiding us through a “date” with her. She approaches us. She makes up the bed for us. She undresses for us. She shows us all the various accouterments of her work—the lubes, the oil, the gloves, the condoms, the dental dams, the tubes of antifungal unguents, the baby-wipes, the cider vinegar, and The Sponge. This slow reveal of all the dizzying products that go into the making of a model of a modern middle-class prostitute gets punctuated with Rachel’s acting out of the cavalcade of sex acts she parades before her clients in a typical hour. There’s a purple dildo involved but no penetration. That, Rachel informs us with a wink and a nod, costs more than the price of admission.

It’s no surprise that the show is preoccupied with time and with money—at least as much as it is with professionalism and pleasure. Rachel keeps one eye on the watch in the midst of all that lube, and when her hour with her clients end, she wrote down everything. Therefore, we do get, as the production promises, “Statistics. Raw, raw statistics.” We know that in her months as a prostitute, she worked 109 shifts with 334 bookings and 197 different men. We know that most of her clients were between the estimated ages of 30 and 50. And we know that she orgasmed 11 percent of the time. It’s probably too much to reference Tess McGill of Working Girl here and say that Rachel has a head for business and a bod for sin, but given that the production laid on the working girl anthems pretty thick during the pre-show, I don’t feel that bad. (One can only listen to Donna Summer and Tina Turner so many times without exacting a little retribution.)

Ultimately, it’s a pleasant—but possibly too pleasant—experience. I mean, sure, I like a graphic ichthus-based description of bacterial vaginosis as much as the next ex-sexworker, and I’ve got nothing against a compassionate tale of being paid to bump naughties with a man so obese that you literally cannot reach to cock to blow him, but the whole of the piece felt a bit boho-fairytale to me. Even if nothing bad happened to Rachel on the job, there had to have been some unbright, nonshiny, unhappy repercussions. That’s how real life works. Rarely do people make the money to pay off one’s student loans and travel around the world for a year without a little psychic blowback is all I’m saying. The show would’ve been better had Rachel chosen to show it to us.

That said, this show does feel real and true. All real, true sexworker narratives are helpful and while the show was only intermittently political, the fact that Rachel stood before us to tell her story at all is itself a deeply political act. And for that—and the illustrative photos of cocks as well as the pie charts—I salute you.

Part Time Prostitute will be playing this Tuesday and Wednesday at the Red Room in New York City; go to the show’s home site for a further schedule.