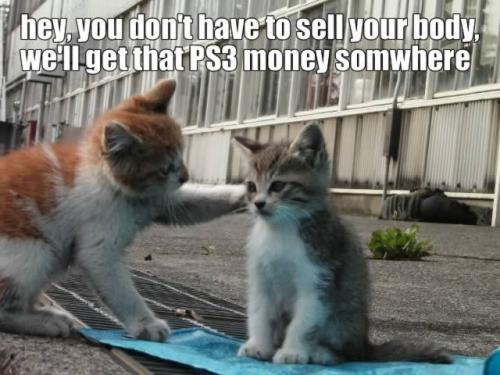 Sex writer Melissa Gira Grant published a piece in the Guardian last week questioning the rhetoric of anti-sex work activists—particularly Ashton Kutcher, who’s been collaborating with wife Demi Moore in a highly publicized “Real Men Don’t Buy Girls” campaign. (Kutcher and Moore’s “activism” has been discussed previously in several other Tits and Sass posts, like this one, this one, and this one, to name just a few.)

In her article, Grant deconstructs the myth of clients “buying” prostitutes instead of exchanging money for labor. Sex workers don’t “sell our bodies” any more than pro-athletes, construction workers, ballerinas or models do. We use our bodies for labor; they’re not “things” that clients can purchase. To buy something implies a permanent change of ownership. After several years of being a prostitute I find that I still very much own my body—despite all the men who have allegedly “bought” me.

Grant adeptly argues that the language of buying/selling a human being as opposed to compensating a person for labor inherently dehumanizes, more than the exchange itself does:

The problem is, real people buy sex, and real people sell sex. The numbers on how many people are involved in the sex trade are notoriously hard to gather, or trust, but there is one constant: buyers are not buying people. When politicians, social service providers and celebrity philanthropists insist that sex workers are selling ourselves, they engage in the same kind of dehumanisation that they claim johns do to us. When they claim that men can buy us, they rob us of our power and our choices.

I obviously couldn’t agree more. The only people I can think of who literally sell their bodies are paid organ donors. To imply that I’m constantly being sold and repurchased is far more objectifying than the consensual exchange between myself and my client, where prices and boundaries are determined by me.

After reading Grant’s piece I came across this rebuttal by feminist blogger Meghan Murphy, who appeared to quite willingly miss the point. She begins: “According to Melissa Gira Grant … your body is no longer connected to your existence as a human being.”

Our bodies are obviously very much connected to our existence as humans, and I’m certain Grant, and all sex workers, would agree. In my work, I happen to employ my body (and mind, believe it or not) in labor that enhances my quality of life. This doesn’t make me an object for sale. Buying an hour or two of sexual entertainment is not the same as buying a person.

Murphy disagrees. She harshly demonizes clients in her piece, claiming that we need to “educate the public about how … women are human beings and that it [is] not acceptable to treat them like objects.” She states that there are “millions of men in this world who like to hold power over women” and “get off on treating women like garbage.”

Now, I’ll admit I’m the first person to talk shit about my clients, but I feel deeply protective over the men whose dollars have sustained me when I hear such horrible accusations thrown their way. I’ve never in my life been “treated like garbage.” Well, at least not since I last held a corporate job. Clients get too attached, some have questionable hygiene, right-wing political beliefs or bad fashion sense, and more than a few leave our session with an obnoxiously inflated ego, which I take partial responsibility for.

Those are about the nastiest things I have to say about them, though. Murphy’s assumption that they’re consistently abusive and treat me like garbage is deeply insulting, to my clients, of course, but also to me. She assumes I’m regularly putting myself in dangerous and degrading situations, and that I’m too stupid to make positive, conscious decisions for myself. These assumptions about my stupidity and weak character degrade me much more deeply than my work ever has.

The point flies over Murphy’s head, who mistakenly summarizes Grant: “From now on, pointing out oppression makes you the oppressor. Pretend that oppression is actually empowering, and you, friend, are now empowering the previously oppressed.” Murphy seems to believe we should allow herself, and other anti-prostitution activists, to inform sex workers how we should feel about our work. We should feel exploited, she argues, because, “A man knows you need the money and so he takes advantage of that need by paying you to use your body. And that’s how exploitation works.” Could that argument be made of most other types of labor, that your client or employer is exploiting you because they know you need money? Or is it inherently degrading for women to have sex?

Murphy then criticizes Grant, an accomplished activist and former sex worker herself, for having garnered  her information on anti-prostitution activism from “just from having watched CNN and from following Ashton Kutcher on Twitter.” Murphy feels much more qualified to speak on the matter because she has “actually spoken to people who do desire to end prostitution.” It’s delightfully fitting that she doesn’t claim here to have spoken to sex workers; to do so would grant legitimacy to the voices of people whom Murphy has decided are merely objects for sale. To speak with other people, who are not sex workers but who have decided what’s best for us—is there anything feminist about that?

Grant’s point on the rhetoric of being bought and sold, as opposed to the reality of being a laborer, was apparently completely lost. Yes, Meghan Murphy, my body is attached to a mind, and a pretty competent one at that. One that’s decided that movie stars and politicians can’t decide what my profession should be, or determine how it degrades me. Working for a living does not equate to being bought.