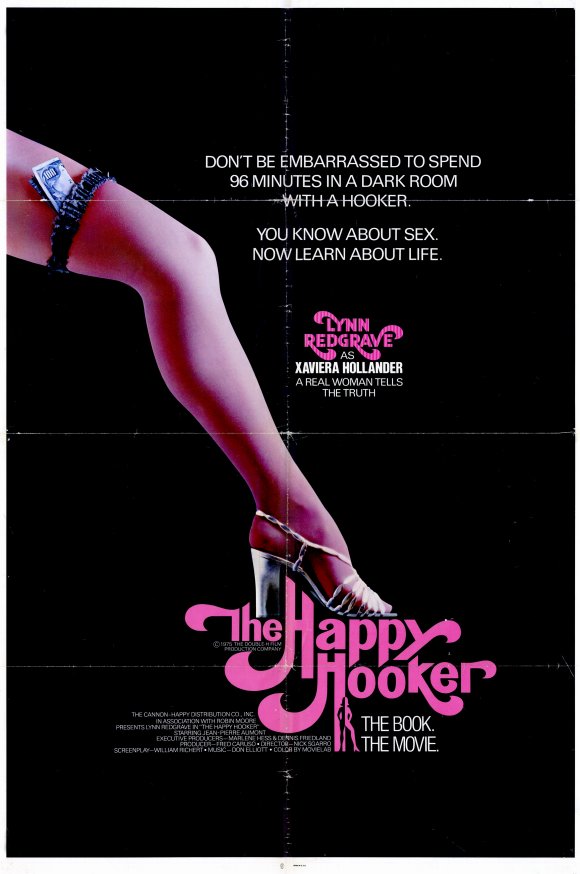 Xaviera comes to America from Amsterdam to marry a guy, but finds out pretty soon that he’s a mama’s boy and storms out on a dinner in this fabulous red dress that was kind of made for storming out on your soon to be mother-in-law and her son. She begins sleeping around because she feels lonely and wants approval from men, she says. She also mentions that she doesn’t see the point in fooling around with love, so she skips right to the good stuff. Then we are treated to her waking up while a man sneaks back to his wife which makes it all kind of ugly.

The men begin to pile up in her mind, all melting down to vital statistics and catchphrases we’ve all heard. I don’t know many women who haven’t been there after dating for a while. She keeps at it though, and by chance meets a fella named Yves. He takes her out, they sleep together, and she proves to be a charming companion; what she doesn’t know is that she’s basically being trained for the kind of escorting she’ll end up doing. Yves doesn’t stick around long, but as he’s leaving town (for a job in the Middle East) he hands he an envelope of money and says she’s intelligent, witty, beautiful, etc, and that she should let men spoil her. She throws a fit—not quite the reaction I expected, but it seems normal enough, I suppose.

Afterward she reflects on how well he treated her, and realizes she’d enjoy having that happen more often. Yves gave her number to his equally wealthy friends, and so she transitions from “office girl to working girl.”

We accompany her on a session where she strips for a finance man who gets off on her stripping on a table in front of him while he throws amounts of money “depending entirely on” his “fancy” (which seems borderline degrading the way he says it), but she uses her charm to get out of it by telling him about the finance news of the day to slow music. She gets a bicycle when she amasses more clients and she makes loads of money in a short amount of time.

Getting hassled by a cop who ends up robbing her makes her decide to work at an agency for protection. Definitely reminds me of how I say we screen not for crazy dudes—although we do care about crazy dudes—but for cops. My sister and I were watching it together and she asked if I felt that way. I had to be honest and admit that I was more afraid of cops now than I’ve ever been. She’d assumed I’d be creeped out by clients, but … I mean, all my clients are a bit odd, I’m a Domina!

There is a Domina in this agency, btw, and it made me think of combining escorting and domination again, something I’ve been thinking about a lot lately. We get to meet the girls in a roundabout way, by seeing them interact with the clients. There are all kinds here: a stoned woman who’s really obtuse, a woman spinning a story of childhood sexual abuse for a client who clearly has a thing for it, a Southern woman being covered in ice cream, a woman who’s ditzy and swears that having sex for a living is the only job that doesn’t make her nervous, and the Domina who puts on an accent and burns a guy with a cigarette, proving that it really does take all kinds.

It seems like a sweet deal until we are reminded that the women are kind of at the mercy of the madam, who fires one of the girls for *maybe* flirting with her boyfriend. The split is 50/50, and the rule is that no one dresses like a whore at the whore house. The other rule is that madam gets first choice, especially if she’s horny. That’s a rule I’d put in place at my brothel, for sure. Her first session at the house involves a man who is on his way to pick up his children, the next one she gets because the woman who’d previously been covered in ice cream refuses to do a double with a black woman. Xaviera and the Black woman, Aurora, then dance for the client and everyone else in the room, and I have to skip ahead because the song is so annoying.

Xaviera gets ambitious and strikes out on her own with some of the girls, then buys out her former boss. The policeman/jerk we saw in the beginning has taken to following her around, though, and it seems obvious that he’s going to make trouble. Methinks he has a crush. I mean, why so much hate? Could be the fact that she’s the most successful madam in NYC. She throws a Christmas party, but afterward takes a party of three who end up being cops. The funny thing is that Aurora told Xaviera that she didn’t need any more and they should just call it a night. I have found that if you’re going to have trouble, it will happen right when you stop listening to that voice (real or imagined) that tells you to chill out because you’re feeling greedy. Also, late night guys seem to be troublemakers (in my experience). That’s part of the reason I stopped seeing any new people after 9pm. It’s not worth it. The guys show up and basically try to bait her into incriminating herself, which she avoids doing, but another of the girls does and they all go to jail. We last see her and the ladies leaving jail the next morning while she tells us she’s just going to find another house and start over.

I dug this film so much, if only because the idea of a woman working and liking her job so much that jail can’t deter her (and not because having a record narrows her options, but just because she likes the job) makes me think of myself. I know a lot of what I do is illegal, since things as small as giving spankings can land a girl in jail in Texas, but I dig it too much to walk away. I also screen like the Secret Service.

Find it on film and in print!