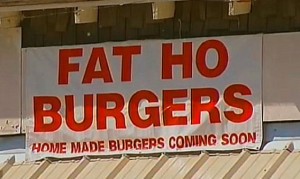 Language matters, but it’s also a lot easier to target specific words than it is to constructively address the issues behind them. And unlike a bunch of Jezebel commenters and more than one hundred Waco, Texas residents, I’m too busy being concerned with real sex worker issues to get worked up about a restaurant named “Fat Ho Burgers.”

Can we please agree that the name doesn’t make any sense? The title isn’t fundamentally offensive; it’s fundamentally confusing. Prostitutes and hamburgers? That’s a combination I’ve not seen before in the sex work world, although maybe I just haven’t been hired by the right rock stars. According to the owner, “ho” is a noun sometimes employed to indicate all variety of inanimate objects. Her examples of common usage are “that ho is big” and “that ho is tight,” neither of which clears the issue up or makes the name seem less sex-centric. (“That ho is tight” is really her best defense?)

Next, I hope we can agree that it’s not necessary or helpful to take the track of one commenter (endorsed by others) who proposed that “ho” is on par with the harshest racial slurs. There’s nothing to be gained by equating the two and it’s a waste of energy and attention to even put ourselves in a position where we attempt to identify the words’ differences or similarities. Moving on.

I see the point of some protestors that “ho” is by definition misogynist. Like all terms for prostitutes, including “prostitute” itself, it’s now used indiscriminately to indicate any woman who is sexually active or dresses provocatively or otherwise transgresses the bounds of socially sanctioned good girl behavior. Got it. But since the power of these words rests in part on buying into the idea that there’s something wrong with promiscuity or something wrong with sex for money, they don’t resonate with me. If a stranger were to call me a whore, ho, or prostitute, I’d know that person is an ass, but I can’t imagine being personally hurt. I am a prostitute, I have been for a while now, and I’m cool with that. I’m not embarrassed by the reality of what I do for work, and good luck trying to shame me into feeling differently. (As Susie Bright says about being called a “slut”: “It would have sounded quaint to me. It would have been impossible in the crowd I was running in to be put down for [that.]”)

That doesn’t mean I think it’s unreasonable for someone else to find the words “ho” or “slut” hurtful. But there can be ways of transforming that pain. Toronto protestors just held a “Slutwalk” to call attention to a horrible policeman. The guy recommended that women not dress like “sluts” if they don’t want to be raped. Now, what’s the larger problem there, the word “slut” or this law enforcement official’s notion that  if women dress a certain way, they deserve to be raped? (Slutwalk addresses both issues at once by trying to diffuse the word “slut” through self-identification like “slut and proud,” while simultaneously rejecting the idea that any woman deserves rape.)

The real problem with “ho” is that prostitutes are a disadvantaged group of people who are denied basic human rights precisely because nasty attitudes are in full effect. That means calling someone a “ho” carries a different weight than calling someone “firecrotch,” although both can be deemed offensive.  And while I’m able to shrug off the word “ho,” I can’t shrug off the mentality behind it because it affects every aspect of how I conduct my (illegal, stigmatized) work. It’s the same mentality that keeps all sex workers in danger of exploitation and violence. But again, the mentality is the problem, not the word, even though one informs the other. When people complain about “political correctness,” it’s precisely because they’ve gotten the idea that their words in and of themselves are wrong, not the crappy ideas that make them use those words. 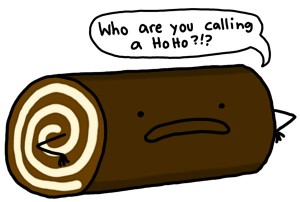 Ralph Nader has pointed out that the way someone gets the attention of young people today is “not by describing grim reality [… It’s by using an] ethnic slur, gender slur, racial slur.” I think he’s right. We’re trained to respond to words like “faggot” and “cunt” like dogs responding to a whistle. We get angry; we target the individual who used the words for being mean-spirited and un-evolved. It’s an isolated incident where our personal, temporary emotions find their release in targeting another individual and then we move on.  Meanwhile, the larger social problems fostering the sentiments behind those words— by withholding rights, doling out unjust punishments, or publicly shaming consensual adults actions—goes unchallenged. (Unless you get your slutwalk—I mean, howalk—on.)

Is Fat Ho Burgers a name that incites violences against sex workers? Is it a phrase demanding sex workers face harsher legal penalties? Calling them unfit parents? Complaining about them leaving condoms on the sidewalks? The name clearly has nothing to do with actual sex workers, so I can’t manage to get angry, not even a little. Nothing about the context sets me off. As Nader goes on to say, “You’re entitled to be much more angry about what these words represent on the ground” and that’s where my energy goes. If all of the feminists and Christians who are ready to decry the use of “ho” were equally as energetic about decriminalizing and de-stigmatizing sex work, things would really get interesting. But making a fuss about the word without changing the world is a lot of wasted effort. Let people eat their ho burgers—this ho doesn’t care. But for God’s sake, let the actual hos have their rights.