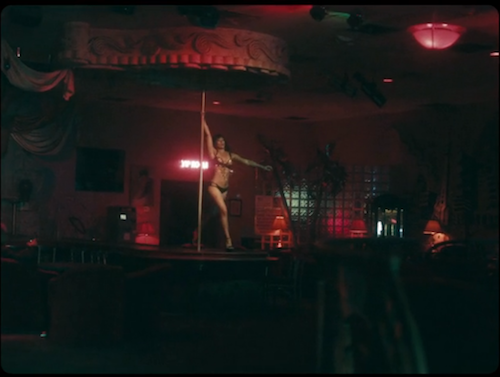 A friend sent me this video last week, rightly pegging it as relevant to my interests. The song is “The Way Out” by Porcelain Raft, the performing name of multi-instrumentalist Mauro Remiddi. It is expansive and atmospheric electronic pop that might be a little too downbeat for a packed club but, as in the video, a perfect track for a quiet afternoon shift. The video stars a very capable pole dancer, employs an elegant one-shot format, and has a subdued mood. It’s more Exotica than Showgirls. Its events threatened to upset me, but the story has a satisfyingly dark conclusion. I reached out to director Michael Lawrence to ask him about his process. Watch the video and read our Q&A below.

Mauro said that you conceptualized the video. What about the song inspired its plot?

When I first heard the track, I was shooting a commercial out in LA—we were in the desert and were driving by all of these derelict buildings, east of the city. It reminded me of a ghost town, but there was something going on beneath the surface. Being born in Buffalo—a small industrial city that is a bit forgotten—these images were ingrained in my memory, part of my childhood. I always wondered what went on behind the unmarked front door of the little bars and clubs that are speckled throughout the city.

The pulsing beat and the lyrical references to a sort of escapism made me think of someone who needed to get away. As I thought more about it, the image of a stripper, being heckled and harassed, came to mind. She’s reached a breaking point, and I wanted to show that moment that everything changes.

The central incident is worst nightmare-turned-revenge fantasy for any dancer who has been physically assaulted on the job. Was there a real-life incident behind the story?

Not particularly. But I had worked previously as a journalist—extensively photographing sex workers and human rights violations in Indonesia—and always had an interest in that decisive moment, that breaking point. The moment you decide to change it all. I’ve had conversations with my subjects about this. I’m sure it fed into my subconscious.

Was it shot in an actual strip club, and where?

The film was shot in an actual strip club, just a few minutes away from the airport in Buffalo, in a rather empty office park. I had spent weeks calling around to every club I could find in the area. I visited them mid-day, shook hands, asked friends…nothing. Lo and behold, Scott, who manages Mademoiselle Folie Bergere, told me to send him the script. A few hours later he called back, and said, “I like the story. I want to help.”

Where did you find your pole dancer? Is she a stripper?

Julie is a trained pole dancer and awesome woman. She’s actually one of my younger sister’s friends—I’ve known her since childhood!

When I first asked her to star in the video, I was concerned she would be uncomfortable with the script…but after she read it, she said “My friends call me Tomb Raider, and I’d love to kick some ass.”

What are your favorite or most memorable images of strippers, in video/film or other media?

Hmm…I guess rather than focus on strippers, I’ve always been interested in people on the fringe of society, powerful women, seduction, what lies beneath it all.