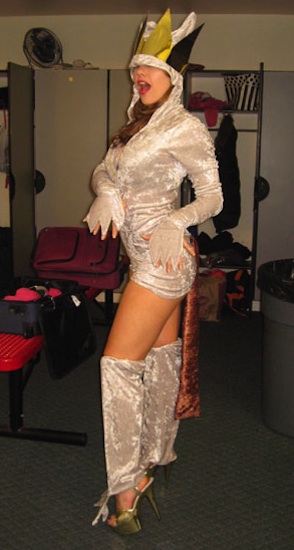 Happy Halloween! Most of you probably celebrated in costume over the weekend, but some of us still have to work tonight. For those strippers gearing up for a Halloween shift, Kat, Catherine and I have put together some music to go along with your sexy stripper costumes tonight.

Sure, you could go with “I Love A Man in Uniform” or “War,” but if you’re feeling like something a bit more original, let us suggest instead Iron Maiden’s “Women in Uniform,” “B.O.B” by Outkast, and, if you can pull it off, “War Pigs.”

We all hear “Bloodletting (The Vampire Song)” at work enough as it is. How about “Slither,” (which is, after all, about vampire strippers) by Tech N9ne, “Bad Things” by Jace Everett if you’re dressed like Sookie, and, of course, anthem of goth strippers everywhere, Type O Negative’s “Black No. 1.”

Let your classic rock out. “Black Magic Woman,” “Spooky,” “Season of the Witch.” Why mess with a formula that’s worked for thousands of strippers over the years?

While Danzig is a stripper staple, it would be a serious oversight to let Halloween pass without them. Hence we suggest “Heart of the Devil,” though you could just as easily use “Am I Demon” or “Devil’s Plaything.” If your DJ doesn’t immediately suggest “Highway to Hell,” “Sympathy for the Devil,”  or “Devil With the Blue Dress,” he should be fired.

Despite the movie, you don’t see a lot of zombie strippers at the club because the makeup is deliberately not hot. But it’s awesomely funny to use liquid latex to make it look like your nipple has been torn off, and you can claim “Thriller” for the night! “Living Dead Girl” belongs in this set along with “Dead Man’s Party.” If your DJ suggests “Zombie” by the Cranberries, punch him. If he suggests Drunks With Guns’ “Zombie,” tip him double.

We hate to encourage DJs to play “Rag Doll” any more than they already do, but it does work well for a Raggedy Ann costume. Instead of Stevie Ray, try “Little Sister” by Queens of the Stone Age. And if you’re a Musical Theater Stripper you can’t not dance to “Coin Operated Boy.”