TITS AND SASS SERVICE JOURNALISM BY AND FOR SEX WORKERS
Home Clients So You Think You Can Fuck A Sex Worker For Free?

It may come as a shock to hear this. You may feel like sexual attraction is only part of the connection you have with this worker, and that paying would deny the authenticity of that. Or maybe you think that you are a really good (looking) person and only creepy or unattractive people pay. Maybe both you and the sex worker are queer and/or have similar politics. You know sex workers and are down with decriminalization. There are many reasons you may feel you are exceptional.

You are operating under a basic misunderstanding of who we are and what we are doing. Which is this:

1. Portraying an inviting version of ourselves, one with genuine elements but oriented to be pleasing to as many people as possible.
2. …because we are trying to make a fucking living.

I am not writing this to make you feel foolish. I am writing this because in the last week I’ve had multiple experiences of people approaching me in person, calling me on the phone, and hitting me up on social media trying to have unpaid sex with me. It’s been hard to turn people down, because as both an escort and a porn performer, I am not trying to get a reputation as a “mean person”. When I do turn people down directly, they don’t listen or they’re patronizing as fuck. An anonymous internet post telling you how it makes me feel is really the best I (and tons of other sex workers) can do in the hope you get the message.

I feel devalued and strung along. When people contact me by way of my ad or social media I assume they are interested in seeing me as an escort. I’m excited and open in response. I like my job, I like meeting people, and most importantly, I like making the money I need to survive. When I realize that you’ve called me to jerk off or that you want to take me out to dinner and try to woo me into unpaid sex, I go through an emotional arc from excitement to confusion to pure rage. That is not the start of a good relationship.

While you might be deluded into thinking that paying for sex is shameful, there is no shame in being a respectful client who is concise in their communication, respects my boundaries, and pays me what I ask for with no bargaining. A real experience of shame for me is being tricked—not just having my time wasted, but having my emotional energy exhorted from me under false pretenses. It also makes me feel like you think that because I’m a hooker that I’m desperate for affection and will take whatever scraps are thrown my way. That is not true. I have lots of friends and lovers. Probably more than you.

If you’re interested in developing a deeper connection with me, see me as a client and check your expectations. I have clients whose relationship with me has evolved into something more complex. The reason that was able to happen is that they never tried to see me for free, they saw me multiple times, and they didn’t try to fast forward to romance against my wishes, so I was able to relax and share some of my real personality with them. Still, I’ve dated very few of these people off the clock, even after years of us knowing each other. Our relationships are mutually satisfying to us both. Despite—in fact, because —money changes hands, there is a deep intimacy that exists between us.

If you don’t have the money to hire me, I understand this may be disappointing to you. However, return to point number 1—I’m not who you think I am. If I’m not getting paid, I am not going to gag on your cock for half an hour and then tell you a few funny, carefully selected stories about my life. I will be a complete person with emotions and feelings that are sometimes in conflict with your own. Sometimes I will be lazy in bed. There will be boundaries about hickies and marks and sometimes you might have to shave my back. There will be a lot of management around having sex with you and sometimes needing to prioritize work. I will not be the one dimensional image that your fantasy creates when you jerk off. It is probably for the best that, along with your crush on Beyoncé or Drake, your interest in me is never reciprocated. 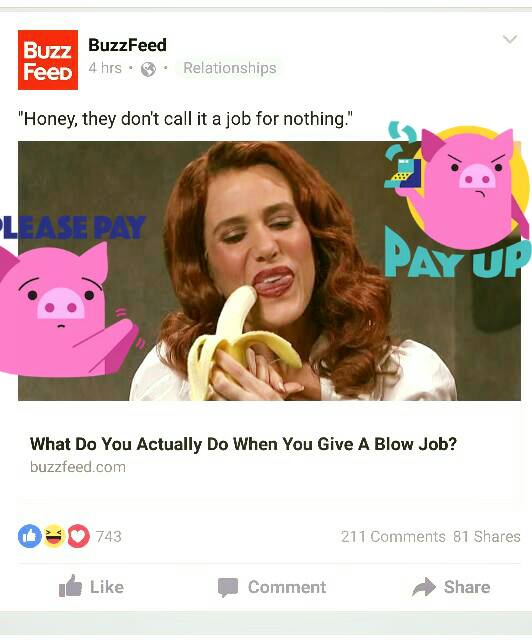 Just so that we are crystal clear, here are some dos and don’ts for engaging with your sex worker crush:

Don’t EVER approach a sex worker in public, especially if they are with other people at the time. You might be just trying to say you’re a fan, but at best I’m just trying to chill at the club and now I feel like have to be on. At worst, I’m with someone I don’t want to disclose to about my profession and you’ve just outed me. It’s scary and it won’t get you laid. Don’t do it.

Do respect sex workers. Respect our occupation. Respect that the experiences that we provide to people are the product of hard work for which we deserve to be compensated in the way we ask. They’re not something anyone is entitled to have just because they want it. Recognize that the hot babe you see drooling for sex on the screen also has a life and is not just masturbating frantically waiting for you to come along and stick your fat cock into them. If you want our attention, you are going to have to make it worth our while. No, that doesn’t mean offering to go down on me for hours or to be my personal servant.

For many, the lure of the sex industry lies in the prospect of having a fantasy realized. However, adults with critical thinking abilities realize they aren’t entitled to treat other people like characters in a dream sequence. Wake up and pay us.