TITS AND SASS SERVICE JOURNALISM BY AND FOR SEX WORKERS
Home Books Neon Wasteland: On Love, Motherhood, and Sex Work In A Rust Belt... 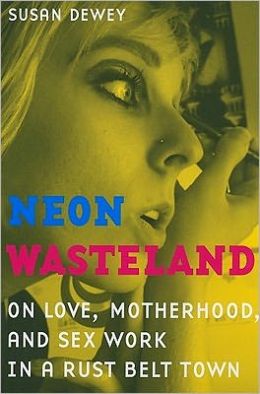 Susan Dewey conducted fieldwork for her academic study at a strip club she calls “Vixens” in a town she calls “Sparksburgh” in the post-industrial economy in upstate New York. She describes interacting with approximately 50 dancers but focuses on a few: Angel, Chantelle, Cinnamon, Diamond, and Star. Some names were changed, but these pseudonyms will sound familiar to anyone who has spent time in a club. The run-down club offers entertainment for working class people in an area with high unemployment. The club is not glamorous but is perceived as the best opportunity in a place of few options, including a few other bars with exotic dancers.

The first chapter opens with a quote from a dancer addressing Dewey: “You grew up like all of us and so you understand.” This context is important because money and socio-economic class are the main topics of the book. The book describes the women’s lives: poor starts in foster care, having children early, low levels of education, little financial or moral family support, economic contraction in the region, unreliable boyfriends and substance use. Dewey’s primary focuses are family and economics, contributing to a small but important body of work (I think of Jo Weldon’s piece in Sex Work Matters) examining the income provided by sex work. In other words, she studies the work rather than the sex.

Dewey offers an accurate portrayal of stripping. She is sympathetic to the women whose lives she describes, and fair to the patrons and management of the club. She describes the independent contractor system—dancers tip out club staff and pay the club to work—for readers unfamiliar with the practices. She also analyzes the women’s negotiation of their perceived and actual stigmatization. Some of the women assure her that they remain “good,” realizing that many may not agree and justifying their assertions by enumerating the sex acts they won’t perform for money.

Dewey describes the way that dancing offers young women more money than they could earn in other unskilled work while also marginalizing them in their communities. This is where her arguments become less convincing, because the women whose stories she includes were already outside acceptable mainstream behavioral and social norms by having been in foster care, having been rejected by their families, being single mothers, and using drugs. Dewey does not contrast these women’s stories with those of women from similar backgrounds who do not take up stripping and there is little analysis of how these factors contribute to marginalization and limited opportunities in the women’s lives. She recognizes the economic and educational limitations these factors contribute, but does not analyze them beyond the ways they led the women to work in the strip club. Dewey does offer information about the contrast between “straight” jobs and stripping, and why the women return to sex work, finding the benefits of employment outside sex work  to be inadequate to their needs.

Another concern taken up in Neon Wasteland is how the women’s work affects their romantic lives. Dewey gives a lot of space for the dancers to discuss the ways dancing affects their relationships, and one explains, “You don’t have to tell me about nice guys…They’re nice until it comes time for you to meet their kids or their families, and then all hell breaks loose.” The implication is that bad girls are not girls to take home to Mama, that relationships with strippers are perceived as short-term fun rather than long-term partnerships by the men involved. This may apply doubly to employed men in the depressed post-industrial economy, whose working-class jobs do not carry the stigma that stripping does. The experienced dancer quoted above believes that a dancer cannot have a long-term stable partnership while dancing. Dewey brings a new facet to this analysis by including the romantic history of a male employee at the club, not a dancer, who had married and divorced two dancers and found it difficult to meet people outside their milieu in part because of the late hours associated with working at the club. He shares some of the dancers’ stigma and recounts non-sex working-women’s appalled reactions to his workplace.

Dewey describes what she calls “pseudointimacy” in the workplace, and the quid pro quo of men paying for women’s attention in the club. She links the manipulation here, the careful measurement of what men in the clubs will and won’t do and pay for in terms of human interaction, with the interpersonal skills one learns to survive growing up in poverty. There is something to this, but the fact is many dancers who do not share such a background have adapted this skill set. Dewey undertook her research in a location where the dancers she interacted with may have been universally working class. This creates the conditions for this assertion, rather than there being many opportunities for women of all classes in strip clubs to hone the ability to read and respond to these signals while  interacting with men. She quotes a dancer who links strip club dynamics to her experience in relationships with men outside work, but neglects analysis of aspects of mini-relationships within the tight boundaries of the club. Each dancer has a relationship with every patron, especially with club regulars, but these relationships are bounded by the rules of the club and the dancer’s individually imposed limits. These relationships might not exist at all outside or without her work.

Another dancer describes how her extreme control of her facial expressions enables her to simultaneously encourage spending and discourage unwanted advances. The women talk about dealing with wanted and unwanted advances, and accumulated humiliations in and outside the club. They ways they cope with passes and propositions at work and at home are hyperfeminine. They discuss performing gendered roles in their relationships not only at work, but with men they have relationships with. Sometimes their relationships with men are undertaken out of a need for a place to stay or other kinds of support, or to avoid dealing with problems that would be harder to address than performing sex and sexuality. The dancers explain how their constant use of their sexuality can lead to their male partners feeling insecure and aggressive or resentful.

Dewey is committed to portraying the women’s situations in their own words, and including their explanations for decisions they have made. Early on she emphasizes that the women involved do not portray themselves as victims but as agents, making choices from within limited options. Her research methods including participant observation are not unusual for research into labor. Research involving spending time at strip clubs is becoming more common after the publication of Katherine Frank’s G-Strings and Sympathy in 2002, which focused on patrons of strip clubs. Dewey centers her analysis on the dancer’s own words, and explains some of the context of her research for readers unfamiliar with strip clubs and the economically depressed environment of upstate New York.

Neon Wasteland does an amazing job bringing the lives of working class exotic dancers into the context of the large body of academic work examining the lives of poor and working class women. However, some sections will make streetwise readers chuckle to themselves about her fear of driving through run-down, industrial and poor neighborhoods. Perhaps this is latent classism, but she may be right to be worried in places where the dancers have been followed and which may be unfamiliar to her.

While there was extensive attention to class, the book lacks any discussion of race. It may be that the location of the club is racially homogeneous, but that there was no mention of the issue at all surprised me. I was also disappointed that Dewey did not further analyze the dancers’ distinction between what they do and what they don’t but other sex workers will do. Sex worker activists call this phenomenon “lateral whorephobia,” and I would be interested to know what Dewey and others have to say about it.