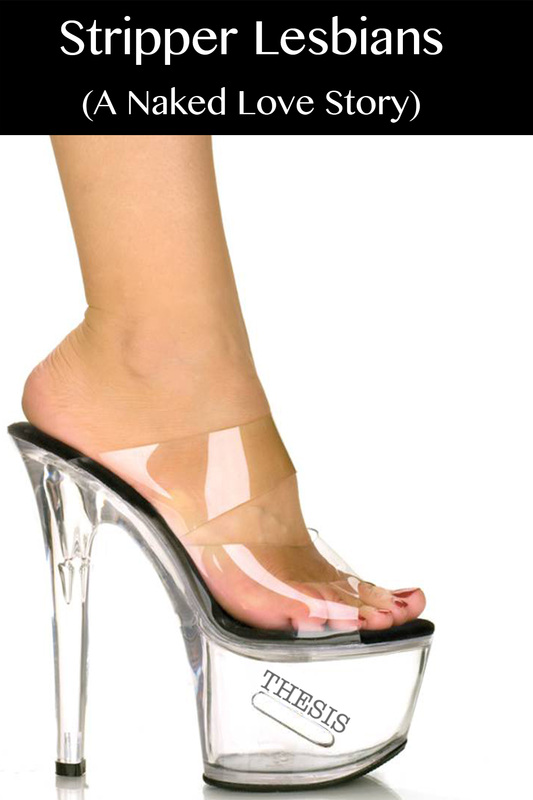 When the play in question is called Stripper Lesbians, one might assume that there will be strippers who are also lesbians. An astute reader is also likely to surmise that the subtext is going to center on labels. Neither assumption is incorrect when applied to the play Stripper Lesbians, directed by Jeff Woodbridge, currently running as part of the Frigid Festival in New York City. It is about strippers who are lesbians and the major dramatic (or possibly comedic) arc makes great swooping circles around the issue with labeling.

The center of this play, written by Kate Foster, teeters uneasily on a love triangle—at its vertex sits the androgynously named Evan (Amanda Berry). Her ex-boyfriend DJ (Joe Beaudin) and her current girlfriend Aisha (Samantha Cooper) serve as the two base angles. Because this play is also about labels, these three characters are also “the academic,” “the heterosexual male,” and the “stripper-lesbian.” There is, therefore, some truth in advertising.

Evan’s writing a thesis (presumably in women’s studies, indistinctly a senior or masters thesis) on strippers. At the behest of the symbolically named DJ, then her boyfriend, Evan takes a job at Wildlands, the local strip club. There she meets Aisha, whom she first studies for her thesis and with whom she later gets Sapphic. It’s the old “Girl-Meets-Girl,” “Girl-Dumps-Boy,” “Girls-Dance-For-Cash-Using-Vaguely-Pina-Baush-Inspired-Choreography-In-The-Most-Improbable-Strip-Club-Ever-Brought-To-The-Stage” story. You know how it goes.

Ok, here’s the deal. I feel bad about trashing this production. It’s clear that the three-member cast is working hard and earnestly, and I feel compelled to acknowledge that it’s good to support any small-budget theatre festival. From somewhere must spring the plays, actors and playwrights who will feed American theatre and nourish American theatregoers, and, really, it does little good for me, a writer who is not even a theatre critic, to bash their collective adorable little brains and their good intentions with the hard rock of my prose. I wish all who had a hand in this blighted production the very best in their professional and personal lives, but speaking as a woman who spent several years as a stripper (and a brief fraction of her life as a lesbian, though those two periods didn’t overlap), I have to admit that this play was pretty awful.

In part, I had a hard time figuring out whether Stripper Lesbians was sending up or trying to play realistically the various political conceits and dramatic tropes that it was juggling. These conceits and tropes were, in no particular order, the following: feminists, sex workers, feminist sex workers, heterosexual males, lesbians, the heterosexual male obsession with lesbians and/or strippers, sex positivity, and really unflattering lingerie.

I also had difficulty following the logic of this play. To wit: Aisha is both a stripper and, as DJ reads from Evan’s thesis, “unemployed.” DJ himself is actually unemployed, although he does audition for Eugene O’Neill’s Long Day’s Journey into Night using a monologue taken from Our Bodies, Ourselves, and appears to live with Evan post-breakup under her good graces and on the money that she earns as a stripper, despite the fact that she was a finalist in “Glamour’s College Student of the Year” for her article that “Mak[es] Anti-Sex Trafficking Sexy,” which was taken from the thesis she wrote while working at Wildlands, a strip club that does not appear to dabble in sex trafficking but has attracted the interest of Playboy, which wants Aisha to pose, to which Evan is opposed to because it’s antifeminist, which they discuss in a scene that takes place after one showing on-stage discourse that culls equally from a Gender Studies 101 syllabus and any episode of South Park featuring Cartman’s mom’s scheisse films (suffice to say that Judith Butler, Simone de Beauvoir, spanking and German accents make cameos). Oh, Aisha is also a cellist. She plays not for money but because it’s her “passion.” However, I suspect my greatest antipathy to Stripper Lesbians came not so much from the kind of sense it made—which was none—and more from the fact that it didn’t seem as if anyone connected with this show had ever been inside a strip club, much less talked to an actual stripper. Things that show, in no particular order, that the show’s writer, director, choreographer, costume designer, and possibly actors have never visited a strip club nor talked to an actual stripper:

There should be a rule: if you’re going to write something about strippers, you should go to a strip club. Barring that, find a friend who knows someone who has worked in a strip club and take her out for coffee. And if you can’t do that, fire up the Google machine and read some blogs.

Strippers are not mythological creatures like unicorns. We exist, and when we see our world depicted in ham-fisted ways, we take it personally. It’s one thing if a work of art, like, for example, Atom Egoyan’s Exotica, creates a three-dimensional parallel universe that is a plausible simulacrum of a strip club without being anything like an actual strip club. It’s another thing entirely if a piece of art involving a strip club exposes its fundamental lack of understanding of a strip club’s basic operation whilst attempting to express a message—and here, without giving away too much of the plot in case you do go—that the art intends as pro-sex worker. I suspect, though I’m not entirely sure, the message is that strippers (and lesbians) are just regular girls like you. And me. But mostly you.

However, when as in Stripper Lesbians there are so very many facets that run full-force-ugly into the wall of actual stripper experience, any message is lost. For example, Aisha reads Evan’s thesis and takes understandable umbrage to Evan’s predatory dissection of her; Aisha gets angry (insert interpretive dance); they fight; their fight crescendos as Evan calls Aisha “a stripper,” spitting the word like an epithet. Herein lies the lesson. Obviously, Evan too is a stripper, and thus through her hypocritical stance, the play calls her superiority into question and implicitly calls her out for slumming it as a stripper and, one supposes, as a lesbian. This message, however, falls flat because the play has long ago gone splat.

At the end of the curtain call, when all the Joan Jett and cellos have been laid to rest, there is no irony in Evan’s supposed superiority because the whole production has been slumming it. From the writer who couldn’t quite do her research, to the director who coaxed these particular performances out of these particular performers, to the actors who couldn’t bear to bare their ass cheeks or their breasts as actual strippers do every single day, to the costume designer who chose those unforgivable silver lamé wedges, to the choreographer who couldn’t divorce herself from her modern dance training—all who made Stripper Lesbians possible—seem united by their condescension for sex-workers.

We strippers, lesbian or not, deserve better than that. So do theatergoers. Do your work, thespians. It may not be sexy, but it does keep you from looking like dumbasses. And that’s one label that I’m entirely comfortable throwing around in this discourse.