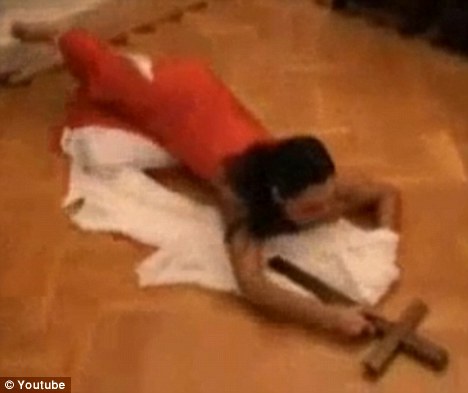 Or so most of the reports read. One ex-stripper nun and her emphatic interpretive dancing has caused the monastery at the Santa Croce in Gerusalemme, a basilica built around 325, to be shut down by Pope Benedict XVI. I see how her performances could be considered inappropriate. She does roll around on the ground, looking like she’s sliding into home with the cross. (What’s the protocol there? Do they have to burn it like a desecrated flag?) But, I have a hard time believing Sister Anna Nobili is the most scandalous thing to happen within the confines of Santa Croce in 1,686 years. We’re talking about the Catholic Church here. What does everyone think? I find her performances to be heartfelt and enthusiastic, albeit vaguely sexual in nature and not the most nunlike. Judge for yourselves.