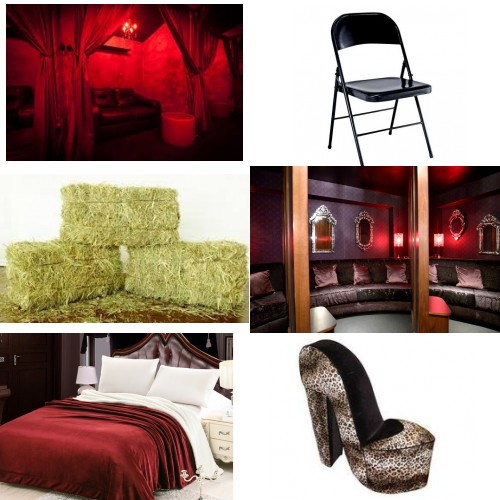 The Bale Of Fucking Hay
Strip clubs that are out in the country can be fun! Despite the shabby decor and remote locales, many dancers find damn good money off the beaten path. Hard-working country boys know how to have fun! That being said, some clubs go a little too far in their “rustic”-themed digs and offer their private dances on actual bales of hay. Look, even the most laid-back and down-to-earth dancers aren’t down to pull the straw out of their intimate areas all night long. Ditch the itch and offer your dancers something soft and silky upon which to rest their moneymakers.

The Bare Minimum
The exact opposite of the ManTrap, these are the seats you’ll find mostly in hole-in the-wall dive bars. They look and feel like the plain vinyl chairs that you find in fast-food burger joints. They’re simple, basic, and easy to clean, but even the most slender and athletic butts will go numb from sitting in one for more than ten minutes. These are the chairs that you have to place a cloth on before you sit on them to
avoid every twerking girl’s worst nightmare—butt zits.

The ManTrap
Found mostly on the main floor in high-end clubs, these soft, roomy armchairs are designed to be comfy enough to sit in for hours. Therein lies the problem—these chintzy, high-backed crushed-velvet monstrosities are so cozy that after a couple of beers, men lose all desire to move. That can be great for liquor sales, but it makes it that much harder to draw guys to your tip rail or lure them into the champagne room.

The Shoe Chair
Oh, how original! A chair shaped like a giant stiletto just like the ones we wear on our feet! Shoe chairs are usually of some tacky pattern like neon green leopard-print or hot pink zebra stripes. Unlike real stripper shoes, which are quite sturdy, these awkwardly shaped glow-in-the-dark eyesores will topple over if too much weight is placed upon them.

The Extras Couch
It’s off in the very back where the floor hosts are too lazy to check, or it’s positioned in a way that the cameras can’t see it. Either way, it smells like cigar smoke and ball sweat and there’s a mysterious stain on the tired upholstery. Whatever you do, don’t stick your hand under the cushions.

The Communal Dance Bench
Because nothing screams “private and intimate” like getting your grind on with 15 of your new best buds on a large wooden bench. Good luck finding a private spot, or not kicking the girl next to you. As a matter of fact, just skip the hassle and up-sell him to VIP.

The Mystery Couch
Even some of the fanciest clubs have that one couch that has been around since the bar opened and has deteriorated over time. In spite of (or perhaps because of) its well-worn exterior, it’s often everybody’s favorite place to get their grind on. Maybe it’s off in the very back, away from the prying eyes of nosy floor hosts, or it’s just comfortable enough to make guys lose track of how long they’ve been sitting. Either way, it smells like cigar smoke and ball sweat and there’s a mysterious stain on the tired upholstery. Whatever you do, don’t stick your hand under the cushions.

The Bed
The first time I worked at a club that offered “Bed Dances”, I was shocked. What could possibly happen in a bed dance?! It sounded forbidden…and that’s why I wound up selling them almost every day. For the most part, a bed dance is simply a lapdance done while the customer is lying down. It’s perfect for plus-size customers, whose weight can inhibit pleasure during a traditional, upright lapdance. Best of all, telling a customer that you’d love to take him to bed is a surefire way to win his heart—and his wallet.