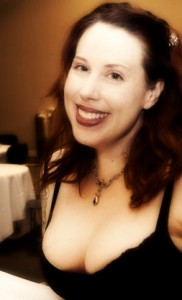 I first heard of Sarah Katherine Lewis in 2006 after she published her first book, a sex work memoir titled Indecent: How I Make it and Fake it as a Girl for Hire, then interviewed her after her 2008 essay and recipe collection Sex and Bacon: Why I Love Things That Are Very, Very Bad for Me. With writing that’s painfully honest, funny and sharp, I had fallen deep in literary love. So I was psyched when I heard she has a new book out, titled—with characteristic self-deprecation—My Boring-Ass Rehab Diary. Other than not really being boring-ass (the quick skimming I’ve done already has been making me laugh), the title is pretty straightforward: Lewis started the journal on January 19, 2011 and had it finished and ready to sell by early March. You can get your own copy here.

I haven’t had a chance to look deeply at your new book yet. Could you tell me a little about it?
Well, it’s more gonzo journalism from me, this time looking at my first-time experience in rehab, dealing with the 12-step stuff and the whole rehab culture, similar to how I wrote about sex work and the whole sex work culture in Indecent. I’m just as crusty and opinionated as ever.  Bring on the hate mail! [laughs] I figure if I haven’t already alienated everyone by talking about sex work, I’d offend all the rehab and recovery folks.

So you actually went through a 12-step program?
Yeah, I went to rehab in Denver. I changed the name of the place for the book because I’m lazy, and I didn’t want to get sued. I kicked heroin in 2006—all by myself, with no support whatsoever. Then I figured I could still drink because it wasn’t as bad as heroin. Then I started drinking a lot. Especially when I started dealing with some PTSD issues from sex work. I was freaking out and drinking all the time. Crying, drinking, having nightmares, panic attacks, etc. Finally I sucked it up and wrote to Writers in Treatment. They sent me to rehab. I’m working for them as a volunteer in L.A. right now because I am so grateful. They are seriously super-awesome. They paid thousands of dollars for my inpatient rehab. I didn’t pay a dime.

So even though I was a stone-cold junkie for a long time, it was booze that was my undoing. In many ways, I found that the cult of rehab and recovery was very similar to the insular world of sex work, a niche culture with specific shibboleths, and very specific traditions and codes. I was cracking it for the first time as an outsider. Similar to my learning curve in the sex industry, you dig?

So did you end up talking about sex work PTSD a lot as part of your recovery?
No, I didn’t. I was in rehab to develop some new habits that would serve me better than the old ones. I didn’t feel like sex work and PTSD were salient. That may be one of the reasons why I was drinking to obliterate, but that wasn’t what I was in rehab addressing… I’d been doing EMDR [eye movement desensitization and reprocessing] in Seattle to address the PTSD issues, which was very helpful, but tends to open up a Pandora’s box of feelings that I was unprepared to handle. My drinking, therefore, increased exponentially.

I was so impressed with your honesty and disclosure in Indecent and Sex and Bacon. Did you find it harder to write about this phase of your life, or easier, or what?
I’ve had to come to terms that I’m an emotional exhibitionist. For me, it’s not hard to tell the truth about what I think and how I feel. It’s almost like, keeping that stuff to myself feels bad! I have to talk about it, and I know that that opens me up for judgment, and I just don’t care.

Did you consider or try to get a publisher for it before deciding to self-publish?
No.  Thank you, that’s an awesome question. I wanted to hold the complete rights to the material and to publicize and promote it myself. I also really like that I can have the price be a “pay what you will” donation-based thing instead of a hard price. $15 is too expensive for anyone I know! The publishing industry has to charge a fuckton of money for new titles because what they’re doing is obsolete—it’s like the record industry versus downloaded files. I didn’t want to pay for the hardware I didn’t even want. I wanted to make my third book as accessible as possible, to reach as many readers as I possibly could while cutting out the middleman. Profits would be turned right back into promotion, which I wouldn’t have to share with other titles or authors. Not that I’m against collective promotion, but I’m in a really DIY space and I wanted to manage all aspects of publishing and promoting my work. I’m currently working with an editor to produce a hard copy that I will be able to sell at readings and shows. Then I plan on traveling and using book sales to fund more readings, word of mouth, etc.

So when did you retire from the sex industry?
I’m not sure if you ever really retire. I’m too old and fat to dance here in L.A., plus, I’m too mean and crusty to deal with all the club bullshit. But, if the price was right, I’d be open to modeling or fetish work. Right now I’m volunteering full-time for Writers In Treatment, so I don’t have a lot of free time, and I’m also trying to work on promoting my writing instead of building a brand as a porn star or fetish worker again. I want to be fully behind this book in every way that I can be, instead of spending my time shopping for new fetish gear, advertising for clients, etc. Plus, I’m currently living in a sober house and I suspect that seeing clients there might be against the rules, though they don’t specifically mention that.

Part of me is very attracted to going back to sex work now that I’m sober and healthier than I’ve been in years, but part of me worries that the environment would lead me right back to the drugs and the crazy. Particularly when I started getting the PTSD symptoms, it seems like my body is giving me a really clear message that that’s not what I need to be doing right now.

It sounds, from this conversation and others I’ve had with you, like you have a love/hate relationship with the whole sex industry. Are there times when you regret having entered at all because it eventually seems to make life so complicated?
I don’t regret a single solitary thing I’ve ever done! Well, except stealing $100 from a disabled domme client because I needed the dope money. That was wack and I do in fact regret that. But no, I don’t regret [sex work]. It was my only option at the time and I stand by my decision to do it. If I hadn’t done it, I wouldn’t have been able to write.

Is that the only time you’ve stolen from a client? When I was stripping I stole $10 once. I guess I thought everyone did it but I actually didn’t dislike my customer so I felt sort of stupid about stealing something so insignificant.
No, I stole as much as I could. But stealing from him was a low blow.

Anything else you want to say about your new book, particularly in relation to sex work?
Yes… There’s such a huge connection between sex work and drugs, not that all sex workers are on drugs, but once you choose to become an outlaw, other things that are outlaw start becoming familiar. And, in my experience, drugs and alcohol contributed to my success as a sex worker by giving me somewhere to put some of the feelings, and by giving me a reliable comfort I could access whenever I needed to. I’m grateful to drugs and alcohol for that. Seriously.

It’s simply easier to be nice to people you don’t like when you’re a little drunk or high. I remember really long nights of dancing in Vegas where I was just about ready to quit, and taking a shot is just like the greatest relief and you wonder why you didn’t do it earlier.
A few shots of whiskey really do make me a better stripper. I’m not sure I could be a showgirl stone-cold sober. I know strippers who are sober and, wow, it’s like they’re ballerinas! I’d be up there doing the robot and trying not to cry. So yeah, there’s the outlaw connection between sex work and the world of drugs—similar societal taboo—similar sense of activities as “dirty.” Similar camaraderie in workers and users. The sense of us being allies against the straight world, deliberately out of the norm.

Once you’re already an outcast, it doesn’t seem to matter as much.
Exactly. And I don’t want to demonize drugs. The same way I have never demonized the sex industry. They’re both just ways low-income women can survive and create their art, versus a 40-hour per week minimum wage job that kills souls. I’d rather be a junkie than someone subject to a humiliating job that exhausts me, kills my spirit, and doesn’t allow me to write. That being said, I was done with drugs and alcohol and was glad to have the opportunity to make new habits that didn’t include them.

That’s great because it means you’re, hopefully, not putting yourself in situations where you need to numb yourself. When I first started dancing, a friend and former strip club bouncer—who had already been through rehab—told me, “If you find you need to drink to strip, then don’t strip.” I didn’t take the advice.
Dude! Who would strip if you couldn’t drink? The strip club would be full of Mormon girls working their way through BYU.