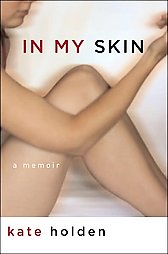 In My Skin by Australian Kate Holden is an example of the “my drug whore hell” memoirs to which I am both attracted and repelled. I’m an IV drug-using sex worker but do not subscribe to the NA model of addiction-as-disease and don’t define my life as hell. Most media doesn’t show anything true about my life at all, but instead falls back on depictions of drug-using sex workers as dead hooker jokes, grotesque caricatures of secondary characters with barely any lines. So I eat up all the tell-alls about them I can find, because even if their perspective on drugs and sex work isn’t mine, someone like me is the main character.

Holden’s pre-heroin self was the middle-class girl many of us once were: a scholarly teetotaler, a bohemian who looked up to Anaïs Nin. Her college friends began to experiment with heroin, and, feeling left out, she tried it. She developed a habit and fell into stereotypical behavior: Workplace theft (and a subsequent firing), breaking up with her recovering boyfriend and attempting to quit herself. When she was kicked out of her parents’ house, she became a street sex worker and then a brothel worker. After some time she enrolled herself in a methadone clinic, and eventually weaned herself off both heroin and methadone. While that sketch might sound like a sensationalist women’s magazine article, In My Skin manages enough powerful nuance to transcend genre.

I felt painful recognition when reading certain passages, like Holden’s description of the tension between a drug using couple trying to stop doing heroin together (waiting impatiently for the other to mention scoring first), and the uniquely tangible appeal dope has compared to most abstract human experiences. You can’t touch or taste fulfillment or pride, Holden points out, but with heroin, you find a concrete sense of accomplishment making the money, scoring the drug, holding the neurochemical equivalent of happiness in your hand and shooting it into your veins. She even notes the smallest (yet instantly relatable) piquant details of junkie life, such as how the drug helped with street work by numbing her to the cold.

In My Skin nails the rough calculus created by sex work and the artificially high price of heroin—making just enough to keep in dope, cigarettes, and books; and the other, more vital arithmetic—the consciousness of how many hours one has to make money before one is faced with paralyzing dopesickness again. It faithfully captures how living with such tunnel vision leaves one at a loss identifying with old “straight” friends, or indeed, straight society as a whole. The memoir contains many striking scenes like the one in which Holden watches people in a supermarket, forgetting what it’s like to buy “normal things”.

Holden’s even better at relating the inner life of a sex worker, perhaps because, even years later, she still sees the sex work part of her past as “honorable,” taking pride in it, and seeing her experience as “empowering,” whereas she’s obviously ashamed of her drug use. When she writes about how remembering the bad sex she had in her youth made her ready to get paid for more bad sex, I recognized the reasoning I and many other sex workers have employed when thinking about our jobs. I laughed at “I’d always sworn not to screw a dealer for dope, that was tacky,” since that has been my own boundary while using heroin and doing sex work.

She’s savvy enough to puncture the classist myth that legal indoor work is better and safer than street work in every way. Yes, Holden acknowledges, in many ways it is more comfortable, but she relates how the hosts at one establishment pressured her and the other workers to allow free condomless extras for some VIP clients. “It was humiliating,” she writes, “but no more so than on the streets,” pinpointing that the essential difference was that “the decision was taken out of my hands […] Here, I was told when to risk my health.” Holden scrutinizes other shortcomings of the Australian legal brothel system as well: how management often plays the women against one another, how they take advantage of taxation to levy the women with extra fees, and how many brothels rigidly enforce the projection of an image of proper, middle class femininity, with any deviation from that—from drug use to feminist views—harshly punished.

Finally, the last thing that this account gets devastatingly right is the complex relationship between sex worker and client. Though Holden goes into every kind of unpleasantness clients bring with them, she manages to highlight the redeeming parts of the interaction. She often describes her clients with fondness, while maintaining the balance between affection and professional distance.

Memoir writers are often lauded for their honesty when what they’re really being praised for is their willingness to entertain the public’s prurient curiosity. But in Holden’s case, what stands out is how she does the opposite of sensationalizing what most people see as a very sordid situation, and instead shows that much about drug use and prostitution is quotidian and complex, not just salacious or horrific.

The fatal flaw of the work is that it is absolutely apolitical. The drug recovery memoir is the modern version of the exorcism narrative: A person is taken over by an unknown and unknowable force, a demon of addiction-as-disease, forced to commit unspeakable acts and led into the underworld until, through a series of rites, the foreign invader is expelled and the person is returned to their community. The story of the exorcism contains no explication of the demon. After hundreds of pages spent in Kate’s skin, the reader feels compassion for her, but not necessarily for other sex workers and drug users. Holden differentiates herself from others in her predicament in elitist terms: They’re “jailheads,” “hollow creatures” who have “given up all their dignity,” whereas Holden can play “a swaggering junkie in dark streets,” but at heart she’s still the “nice, polite, middle-class girl” she is when she’s at home with her parents.

Holden does not impel the reader to find a solution in terms of bettering the lives of other drug users and sex workers. Like the exorcism narrative, In My Skin ultimately blames no one but the narrator for her plight. The book has no social context at all. Reading it, one hasn’t the slightest hint that the sex workers’ rights movement and drug users’ unions even exist, despite the ample representation of both in Holden’s native country. In the end, no matter how easy it is to identify with Holden, and no matter how vividly and accurately she paints her world, In My Skin fails the same way the tritest tell-alls do: By telling a drug-using sex worker’s story that leaves one with no understanding of the drug war or whorephobia, she’s spun a fundamentally, criminally incomplete tale.