TITS AND SASS SERVICE JOURNALISM BY AND FOR SEX WORKERS
Home Strippers If Your Blog Post is Journalism, My Lapdance is Art: The NY...

Sounds like someone’s been shot down by a stripper! Sorry about your boner, buddy. Gothamist has slightly more compassion:

We’d humbly suggest to the court that attempting to gyrate when the jukebox breaks and plays Sussudio for the third time and most of the patrons are on their fifth Diet Pepsi is not merely training, but baptism in the fire of combat.

That’s more like it. Especially if your customer is as misinformed as that Voice writer and thinks a $25 lap dance is supposed to last for ten minutes. 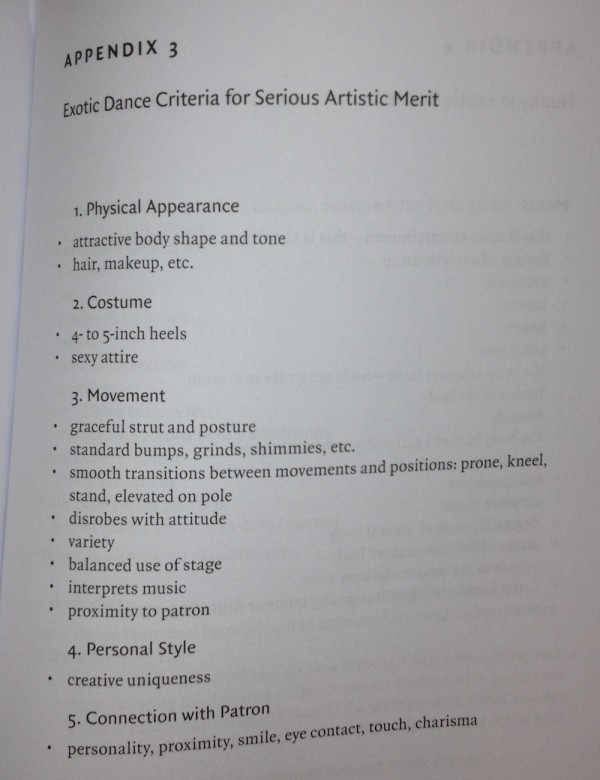 There’s a lot in play in this case, and contesting the idea that stripping is art might turn out to be the least significant element. Contrary to that Voice post, it’s pretty well-established that exotic dance is, in fact, an art form. There are certain criteria for its performance, there are choreographed moves, there are standards that it meets. Anthropologist and dance scholar Judith Lynne Hanna, who has served as an expert witness in many cases like these, lists its moves in her recent book, Naked Truth. See that list to the left? And this pole dancing glossary? If anyone who thinks exotic dance isn’t art or isn’t choreographed can perform these without practice, I might consider not laughing at them. Lapdancing might be a performance that crosses over into sex work, sure, but it still has its own expressive goals. Even if that goal is giving a customer a boner. Doesn’t make it Not Art.

Strip clubs are in business because of the naked dancing women. That’s their primary function. They are also in the business of selling alcohol (sometimes; not in the case of this club) and champange rooms, but, just like people don’t go to Radio City for the concessions, people don’t go to strip clubs just to drink Pepsi. The dominant percentage of their business comes from patrons entering the establishment to enjoy the performances.

If New York is going to allow for an exemption for something as subjective as artistic performances, they have to expect challenges like this from strip clubs, and, perhaps, other amusements that are artistic in nature. In 2006, New York jazz clubs were granted an exemption from this amusement admission tax when then-Gov Pataki signed Senate Bill 06972 into law. The bill put jazz clubs into the “art” category, and jazz is frequently all about making shit up on the fly in dark rooms. It’s called improvisation.

Clearly Nite Moves is trying to get out of paying taxes on cover charges and the cut it takes from dancers on private dance fees. For their part, the dancers are already liable for income taxes on their portion of the dance price. If anyone deserves the tax break for producing art, it’s the performing artists themselves. But to argue that their performances aren’t art is an argument on par with “my three-year-old could draw that.”