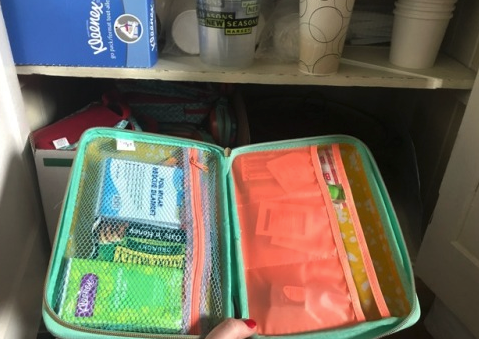 First of all, do you know what population you want to serve?

Think about whom you want to serve and what you think they need. If possible, go out and have some conversations!

I knew from the start I want to work with street-based sex workers and houseless people. A lot of people are like “Pick one or the other! Don’t muddy your mission!” which kind of makes sense, I guess, but also makes no sense. There’s overlap there! Some street-based workers are houseless and some houseless people dip in and out of sex work to get by! Plus, having some basic supplies that can keep you going for another day or few hours might make the difference between seeing someone you don’t feel good about or not or doing sex work you don’t want to do or not. Operating from a harm reduction stance means trying to give people the tools they need to stay safe, including trying to give them enough support to opt out of sex work if they want to. Ideally, someday I’ll have a drop-in center and funds to support people in even more concrete ways, but for now what I have is food, safer sex supplies, and some clothes.

Do you know where they even are?

Those sound like basic questions, but I found out quickly that despite the reputation which certain areas of Portland have as high-traffic strolls for low income and houseless street-based sex workers, the reality is vastly different: years of “Pro-free” zones, gentrification and the increased policing which accompanies it, and then the housing crisis all combined to give street-based workers more incentive than ever to stay hidden and to avoid even the well-meaning efforts of clueless people like myself. (In case you didn’t know, a “pro-free”, aka prostitution-free zone, is where possession of condoms serves as evidence of prostitution and cause for arrest. This approach was also used by police to target drug users leaving needle exchange sites, where possession of clean sharps was grounds for arrest. While both of these policies are now technically illegal, the DA still uses possession of condoms as evidence of a crime, but the crime now is “trafficking” and the justification is an especially twisted interpretation of the Mann Act: “The condoms crossed state lines.”)

I’ve been doing street outreach since 2015, when I got a grant to offer home HIV test kits and hygiene kits to marginalized or street-based sex workers. It also covered some of the printing costs for the zine I do, Working It, and small payments for submissions, but I’ll focus on the street outreach today.

I spent hours walking around one well-known stroll that I knew the DA targeted (according to one of his deputies, it is one of three areas that remain de facto pro-free zones where having weaves, acrylic nails, cash, staying in a motel, or having a lipstick tattoo are reasons to stop and frisk) but this knowledge didn’t click with me for days. Why couldn’t I find anyone willing to talk to me, let alone take a condom, HIV home test kit, or safety kit? Everyone I talked to said the same thing, “Oh, I don’t have sex.”

“Maybe you know someone who does!” I would reply brightly.

Weird looks in response, and they walked away.

After talking with Bettie about this, I want to explain that it isn’t just the fact that I was a stranger in hotly contested territory. It’s also about a stranger in contested territory walking up to you and just assuming you need condoms or hygiene stuff. Maybe you do! But why is this the first thing a stranger offers you, in this area that the police sweep of sex workers and houseless people every few weeks? Sex workers know to use condoms; we aren’t stupid. It can seem pathologizing to only offer condoms and HIV home test kits, as if all that matters is that we not spread disease. Making people feel pathologized isn’t the goal here! Building strong communities is.

So, I talked to my friends who work in Philly and DC with Project SAFE and HIPS respectively. They said the same thing: offer candy!

What are you offering?

So! Second: have things to offer besides basic harm reduction supplies, such as candy! So, I added candy, energy bars, first aid supplies, and bottles of water to what I was already carrying around, and then just expanded to offering a regular hot meal where people can come, pick up food and supplies, and hang out for a while. I also reached out to a local organization that prepares and serves free hot meals every Friday to anyone who identifies as a woman. While women eat, they can also fill out shopping lists for volunteers to pick stuff up: everything from underwear and socks to shampoo and tampons is available, besides more things you wouldn’t think of unless you spent some time houseless. Every second Friday of the month I go and set up a table where participants can pick up nail polish, makeup, candy and energy bars, wipes, and tiny hygiene supplies (hand sanitizer is a must!). Mixed in amongst the offerings: condoms and HIV test kits.

If you’re somewhere hot—and that’s encompassing more and more places as climate change gets entrenched–bottled water is a necessity during the hot months.  It isn’t just hydration, though. Basic cuts that shouldn’t be a problem become big deals without access to clean water and soap, and abscesses that can heal with support can kill people without care.

Are you being accessible?

Third: Give people solid opportunities to talk to you, get to know you, and learn that you’re trustworthy. (Or not! Either way.) If I want to work with low-income sex workers, street-based workers, or even houseless people, they need to know who the fuck I am and that I’m not just another well-intentioned but officious white middle-class lady. Be patient and let people get to know you, and ask what they want as well as what they need.

Are you respecting boundaries?

Fourth: If people don’t want help, don’t push it. I walk up to people or their tents, ask if they’re hungry or want water or or wipes or socks or first aid kits and etc., and if they say yes, I’ll hand that stuff over and ask about other stuff: condoms, home HIV test kits—-the stuff that is more personal and might seem more pathologizing. If they say no at any point, I ask if they want to take something for a friend or if they know anyone who might want some of it. I’ve found that people who live or work outside are a tight-knit community who share resources and information and will grab stuff for friends who aren’t there, so as well as offering plausible deniability about their need for an item, it also really might be useful to a friend.

If they aren’t interested, I tell them the schedule I do outreach on and give them space.

It’s a work in progress and I’m still learning best practices as I go. If it feels awkward, it’s okay. It is awkward! Let’s get awkward! (My therapist gave me a button that says this—I treasure it.) Some people are going to be angry at you, homeowners are going to be resentful (I’ve had the cops called on me but haven’t been arrested for outreach yet, though I’m not ruling it out!) As long as you’re respectful of everyone’s humanity, listen, and are coming from a sincere place of wanting to support and work together with people rather than save them, you’ll be able to make the connections you need to keep going. That’s what counts.