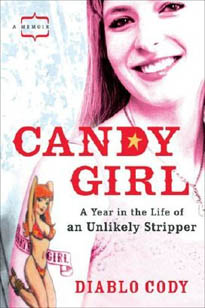 I was outed the other day as a stripper. I tracked down everyone involved in the gossip chain, found the weak link (who sent me an apology letter), and then asked one of the recipients of this hot morsel of Big News in a Small Town out to coffee. She told me she was surprised that I was nude dancing but she didn’t really care; she thought it was kinda neat and had I read Candy Girl? I would love it, she told me. It’s all about a cool girl stripper. I hadn’t read it but I’ve heard a smattering of talk in the sex worker scene about it. So I decided to read it, seeing as how, as my Small Town friend demonstrated, it’s the modern touchstone to answer every civilian girl’s fantastical question: “What’s it like to be a stripper?”

Here on Tits and Sass there’s general disagreement on the quality of this book. Kat likes it. Catherine doesn’t. So it’s kind of appropriate that I’m writing the review because I generally like 93 percent of the book and abhor 7 percent so deeply, I want to scream at Diablo Cody, “Are you fucking serious?!!”

Let’s start with the good.

Diablo Cody is an undeniably fantastic writer.  Whether she’s writing about stripping or her fiancé’s adorable daughter, dubbed “Peanut” in the book, her prose is so precise it cuts. She’s funny, her vocabulary is extensive, and the details down to the exact color of the slushy snow (dove-grey) in Minneapolis still glow in my mind. I gulped the book down whole in one day and night because it had that addictive, fast-paced style that reminded me of why I fell in love with reading.

She’s cool. Seriously, this girl, who calls herself a nerd and a music geek throughout the whole book, is definitely on the Modern Hipster-Intellectual A-list (Hello, she went on and wrote Juno, one of the most popular films in this decade, and took home an Academy Award for Best Original Screenplay). She drops obscure pop culture and music culture references so fast and so hard, I’ll admit I missed a good 9-13 percent of the book because I was raised under a rock listening to random Celtic music. For folks in the know, I’m sure the ’80s thru ’90s name dropping was a real riot.  She also uses super hip, sometimes raunchy language—poontang, manchowder, etc—so that I’m sure if my mom read the book she’d miss about 22 percent.

Part of the whole schtick of this book is that she is the “unlikely” stripper and though I can’t fault her on the title (publishers gotta say what brings in the scrilla) that’s sort of her MO throughout. The reason the title bugs a little is because, what’s an unlikely stripper? And what’s a likely stripper? Come on people, really draw on your ignorance and stereotypes here. I’m sure you can figure out that unlikely strippers are smart, really going somewhere in life, and had a perfect childhood. Likely strippers are the opposite and don’t worry about challenging these assumptions.

Diablo Cody doesn’t spend a whole lot of the book challenging these assumptions either, but hey, this is a memoir, not a political statement. So I stuck with her and was mostly happy. She did dig into some of the more juicy and complex elements of sex work including a chapter where in a money hungry moment she crosses her own physical boundaries with a customer. My general thesis on the book until I got to the second to last chapter was that she’s a great writer and her description of stripping gigs is accurate down to the stripper complaining to the DJ that she hasn’t shit in a week and the DJ suggesting bran cereal. It’s only a shame we didn’t get to see the humanity of her coworkers and customers a little more. She has little affection for the women she works with, save for a chapter where she kind-of bonds with, kind-of interrogates Nico, a former prostitute, about her past. She has even fewer words to say about customers unless it is to describe some wild fetish—we don’t ever learn here about regular guys who just come to the club to relax.

But Diablo isn’t really about caring, she’s a cucumber cool anthropologist in the club, a humorously self-deprecating, bumbling new stripper, and kept her story pleasantly devoid of moralizing most the time. Considering how many clubs she worked at in such a limited time, it makes sense that she stayed an observer and never really got into the thick of stripperdom with its inevitable friendships and heart rendering moments.

Then, in the opening paragraph of the second to last chapter, I read this:

“Most sex workers (a classification that includes strippers) cite a past incident of sexual abuse in trying to explain the illicit path they’ve stumbled upon. I have no such justification.” Diablo Cody, as far as I was concerned, had just swung a baseball bat at the knees of her narrative.  It was crumpled on the floor and she gave it a few more kicks when it was down, with: “I was never molested as a child, probably because I wasn’t very attractive.” and “I wasn’t a dimpled, curly haired Campbell Kid ripe for diddling by an older relative.”

First off. What the fuck? You think cute little girls are the only ones who get molested? Holy shit, stop writing, Diablo, and go do your homework. Second, thanks for strengthening stereotypes of strippers everywhere; we sex workers really appreciate being described and subsequently treated as damaged and un-whole people operating solely from a point of childhood sexual trauma that we haven’t healed from.

Many friends who find out about my stripping like to ask me about the girls. They want me to admit they’re all fucked up. And the customers are fucked up too, right? My response ranges from evasive to downright defensive. What study came out saying that most strippers are victims of childhood sexual abuse? And hello, look the fuck around people! 1 in 6 women have been raped/attempted raped in their lifetimes. That’s a big enough ratio to assume that a cross section of women anywhere would have a fair share of disturbing stories of abuse (I know I heard more than a few in college). So in a job that is all-women and openly sexual enough that many women share their personal histories with each other, wouldn’t you expect to hear some breathtakingly sad stories of abuse? And for those of us in the business, who have relationships with each other, you know, care  about each other and have heard these stories from each other, there’s something very very unfunny about describing it as “diddling with a relative.”

Diablo Cody aptly analyzes her short obsession with sex work as a revolt against her own banal childhood and ennui of her midtwenties. This is probably a good description of what catalyzed my entrance into stripping, but I don’t think this makes me all that unlikely. There’s a bunch of “unlikely” strippers and sex workers contributing to Tits and Sass and taking off their clothes for money and guess what, that makes us all kind of “likely” strippers who are only revolutionary in that we’re loud enough to open up new possibilities for general civilian thinking and acting around sex work. We purposefully don’t claim one-of-a-kind status, and neither should Diablo. For Diablo Cody, this was a foray into novelty, she didn’t stick around that long and she didn’t make friends. She has some eyebrow-raising stories about kinksters and oppressive strip club management that I’m sure titillated the masses who read her book. But Candy Girl has no heart. We don’t learn compassion or empathy for anyone in the book and as an admittedly emotionally sensitive stripper, this gives the book little value except as a passing thrill.