For our second installment of Big Mother Is Watching You, a guide to prominent anti-sex worker activists and officials, we’d like to remind you of a few salient facts about Hillary Clinton and her relationship to Somaly Mam, after the formal launch of Clinton’s second presidential bid on Sunday.

While U.S. Secretary of State (2009-2013), Hillary Clinton was responsible for the continuation, from the Bush Administration, of trafficking-related foreign policy harmful to sex workers in the Global South. Under her tenure, the U.S. Department of State continued enforcing the Anti-Prostitution Loyalty Oath, a policy that led to the defunding of a number of very effective anti-HIV/AIDS organizations operating in the Global South who were were unwilling to condemn the sex workers receiving their services. The U.S. government defended that policy to the U.S. Supreme Court, who ruled 6-2 against them in 2013 on free speech grounds (Justice Elena Kagan recused). Unfortunately, that ruling only applies to organizations based in the United States, though it was recently reinterpreted to also apply to organizations based in the U.S. but working in affiliates or offices abroad.

During Clinton’s administration, the Trafficking In Persons Office, a division of the U.S. Department of State, also continued to reward Cambodia with an improved TIP Report ranking for its 2008 criminalization of prostitution, a Bush administration move that led to the imprisonment of sex workers in Orwellian “rehabilitation centers” and other horrors, including beatings, extortion, and rape.

END_OF_DOCUMENT_TOKEN_TO_BE_REPLACED 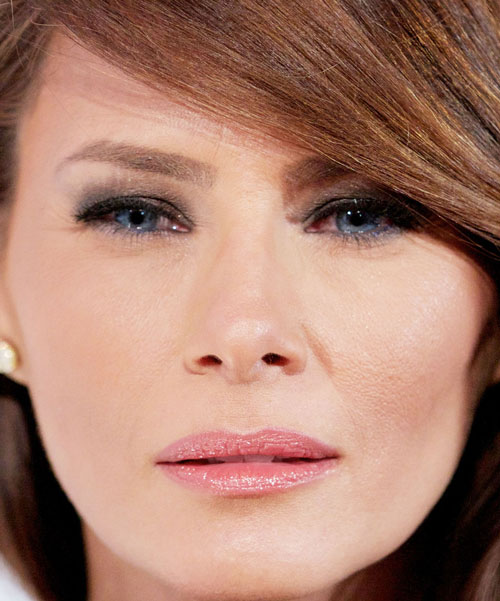 With every new presidency comes the expectation that the First Spouse will adopt a cause that is considered sufficiently non-controversial in nature. So as the doomsday clock ticked ever faster towards the Trump inauguration at the end of 2016, people not only speculated about which nightmarish regressive agendas Donald would make a waking reality while in office, but also about which one First Lady Melania would take on as her own.

The Slovenian former model has faced a barrage of accusations about her patchy immigration record, leaked nude photo spreads, and most salacious of all (and most relevant to our interests at Tits and Sass), suggestions that she once worked as a “high-end escort” in New York. For all these reasons and because it is the issue du jour with celebrities, suburban moms, and religious zealots alike, the anti-trafficking movement is just the ticket for Melania’s pet project. But before I explain exactly why that is, let’s get to know centerfold-posing, married-to-a-repulsive-billionaire, definitely-not-a-prostitute Melania Trump a little bit better.

For the past 24 years, each prospective First Lady has submitted a personal cookie recipe to Family Circle magazine, which readers then vote on to determine who will make the best wife and mother to the Nation, because patriarchy. If her pre-election baking skills are any indication, the current First Lady is a woman who does not give a single shit about political life. “Melania Trump’s Star Cookies” even look sad in their professional photographs online. In essence, the recipe is for a needlessly complicated sugar cookie which calls for two egg yolks but only one egg white. Why does she hate us? There’s a half-hearted dollop of sour cream at the very end which, I imagine, is supposed to be a feeble wink at her Slavic roots. Then, in some sort of lazy nod toward patriotism, she instructs us to “use a 2 ½ inch star-shaped cookie cutter.” If you don’t own one, you’ve already let the terrorists win. After you “heat oven to 350F”, the last instruction is, “Can I go home now?” To put this in perspective, Michelle Obama made “White and Dark Chocolate Chip Cookies.” See what she did there? Because Michelle Obama is always in it to win it.

But the unfortunate cookie recipe dates back to September of last year, and it was only the early days of the robust compendium of sad Melania anecdotes we would accrue. Her mood on Inauguration Day matched that of the rest of the world, at least when she thought a certain someone wasn’t watching. If Melania has ever been a sex worker—which she absolutely has not been and feel free to check with her lawyer about that—this is exactly what she would have looked like during those rare moments of solitude when her client was in the bathroom and she no longer had to emote. It’s the facial expression that goes along with that glorious freedom at the end of a call when you step back into the hotel hallway and can finally fart in peace and the sublime pleasure of leaving your armpits unshaven for the whole week you’re on a break from work. Oh sweet relief! Unfortunately, that brief moment caught on camera was but one of many things that fueled dark speculations that there might be trouble in paradise for Mrs.Trump.

At this point it seems like her passion project is avoiding her husband as much as possible (she is excelling at this) so it’s unclear if she’s ready to put much more on her plate right now. If her enthusiasm for public life and antiquated feminine kitchen tasks are any sign of her ambitions to come, then Melania will likely take a path similar to the more apathetic first ladies who came before her, such as Jackie Kennedy, who dedicated her Vassar education and fluency in French to redecorating the White House. Or Lady Bird Johnson shortly thereafter, who believed that planting flowers up and down America’s highways would add some much-needed cheer to hundreds of thousands of Vietnam veteran funeral processions.

But to take the easy way out like these women did would be a grave loss for an anti-trafficking movement that relies heavily on key endorsements from celebrities who have literally no idea what they’re talking about. It would be a loss for the Trump administration which could capitalize on the conservative agenda espoused by most anti-trafficking groups, just as many American governments before it have done. And most of all, it would be a public relations loss for Melania herself, because nothing says “I hate prostitutes and am definitely not one” louder and prouder than mainstream anti-trafficking work.

Here are the top six reasons Melania Trump should support the anti-trafficking industry as First Lady:

END_OF_DOCUMENT_TOKEN_TO_BE_REPLACED

Big Mother Is Watching You: Mistresses of the Universe