Here’s the story: A well-to-do Virginian businessman takes needy women under his financial wing on the condition that they follow the rules of his “scholarship plan.” If they break these rules, which consist of limits on alcohol and drug intake, and requirements to stay in contact with their benefactor, they receive a spanking. (He’s inspired by “The Spencer Plan,” a system of domestic “discipline” intended to be used by a husband and wife.) All of the women involved are of legal age. Many of them work together at the restaurant he owns.

One day, the man accuses one of these women of stealing from him and fires her (as an employee and, presumably, as a “scholarship” recipient.) A week later, six of these women file charges of sexual assault. A scandal is born.

END_OF_DOCUMENT_TOKEN_TO_BE_REPLACED 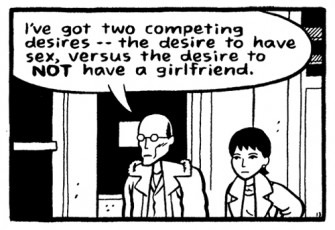 I once joked that he’s more devoted to his call girl than most men are to their wives – now I recognize it’s a simple statement of fact.

— Jeet Heer on his friend the cartoonist Chester Brown, who recently published a book about his experiences as a john. Heer adds that “paying for sex has made Chester happier and more psychologically balanced.”

Sweatpants Boner Man, Widemouth Bass Man, and Other People Not to Be at the Strip Club

Paul Carr has been writing a series of reports from Las Vegas for the Huffington Post with his sobriety as the hook—what’s it like to be in Vegas sober, etc. His guide for part of the trip has been Ruth Fowler, fellow sober person, former stripper and author of the memoir No Man’s Land. For the fourth installment of Carr’s report, they met up with Daisy Delfina and GCupBitch to record a hilarious video that, in the best possible way, sounds exactly like strippers ranting at a diner after work.

I’ve sat at the rack at a truck stop titty bar with Ruth, worked with G on opposite ends of the continent, and shared a dinner table with Daisy. They are charming and bright women and the perfect ambassadors to bring the term “sweatpants boner man” into the wider lexicon. Here’s the original Stripper Web thread where the term was coined. To the best of my knowledge, adult film performer and feature dancer Ginger Lee was the first one to use the phrase. Now it can be known that Sweatpants Boner Man is the new Raincoat Charlie.