Lawyers and sex workers’ rights advocates had long maintained that the laws struck down in Bedford v Canada likely contributed to dozens of sex workers falling victim to the infamous serial killer Robert Pickton, who in 2007 was found guilty of murdering sex workers he picked up in Vancouver’s Downtown East Side neighborhood over a period of many years.

The decision to strike down the prostitution laws was seen as a massive victory for sex worker rights in Canada. However, in their ruling the judges decided that the laws—unconstitutional though they were—would remain in place for one year, after which time they would expire. Technically, this means that the old laws are still in place and will not expire until December 2014. This one year extension of the existing laws was seen as a grace period to give the government time to draft and pass new prostitution legislation should they choose to do so. An alternative to introducing new legislation would be to allow the current laws to expire and leave the regulation of sex work up to individual provinces and municipalities. 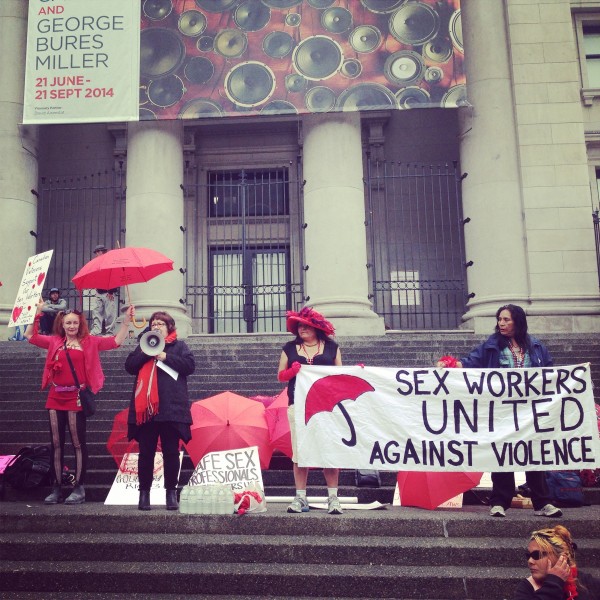 The introduction of Bill C-36 earlier this month did not come as a big surprise to anybody. Beginning in January 2014, Conservative politicians began drumming up support for a Nordic model-style law to be introduced in Canada. They wrote op-eds, appeared on radio and TV segments, and distributed questionnaires and petitions to their supporters to start getting the Canadian public on board with criminalizing the purchase—but not the sale—of sexual services.

Conservatives maintain that workers in the sex trade are victims, and claim that criminalizing them would only victimize them further. They argue that the laws should go after the purchasers of sexual services, as they are the ones who are causing harm to people working in the sex trade.

Intriguingly, it was revealed last week that some members of the Conservative Party wanted to introduce an outright ban on all aspects of prostitution, both the selling and buying of sexual services, similar to the legal situation throughout much of the United States. Bill C-36, which would criminalize buyers but not sellers of sexual services, was a compromise intended to appease the greatest possible number of Conservative Party supporters. In reality, many members of the Party are unhappy with the proposed legislation. For the anti-prostitution brigade, the bill doesn’t go far enough. For the libertarians, the bill is an unacceptable infringement on personal liberties.

The bill has virtually no support among non-Conservatives. Of those casting votes, every single Member of Parliament from all of the opposition parties—The Liberal Party, The New Democratic Party, and the Green Party—voted against Bill C-36 in the House of Commons on June 16. The bill passed its second reading by a 139-117 vote. It has been sent to the Standing Committee on Justice and Human Rights. After the Committee reports back to the House, the Members of Parliament will debate the legislation again and vote after a third reading. After passing third reading—which it likely will, with no amendments—the bill will be sent to the Senate. If approved by the Senate (also likely), the bill will be referred to the Governor General of Canada, and the bill will become law.

Though it is almost certain that Bill C-36 will pass into law before the existing prostitution laws expire in December, there is widespread speculation in the legal community that the bill is in violation of the Charter. Vancouver lawyer Katrina Pacey is confident that Bill C-36 is unconstitutional and will not withstand a Charter challenge. At a sex worker rights rally held in Vancouver on June 14, she reassured a crowd of sex workers and their allies that lawyers would go back to court and “win again.” She and other lawyers argue that Bill C-36 violates Section 7 of the Charter, just as the old laws did, because it would prevent sex workers from taking steps to protect themselves. The judges in the Bedford case state that for some sex workers, participation in the sex trade is not the result of any meaningful choice. As such, they are not choosing to expose themselves to the risks that they may encounter as a result of selling sexual services. It is essential that the law does not interfere with their ability to protect themselves by way of taking basic safety precautions such as screening clients or working in safe indoor spaces. 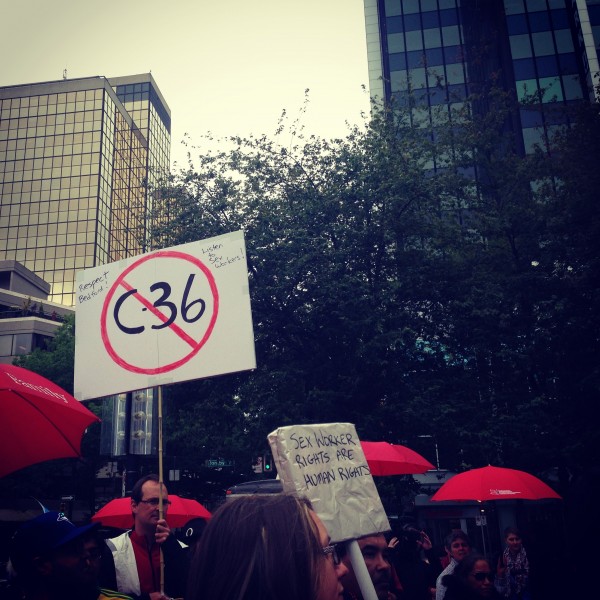 In addition to knowing that the new laws are unlikely to pass constitutional muster, the Conservatives must know that the legislation will not help those working in the sex industry. The majority of Canada’s academic experts agree that criminalizing the sex trade will push the industry underground and make sex workers more vulnerable to predators; over 300 of these experts signed and sent a letter to Prime Minister Stephen Harper in March to share this information and express their opposition to laws which would criminalize any aspect of the sex trade.

Why, then, is the Conservative government trying to pass this bill, knowing that doing so will cause harm to sex workers and waste millions of dollars in taxpayer money when a new Charter challenge is brought forward? One possibility is that the decision is influenced by the Conservative Party’s need to appease their base in preparation for the next federal election, which is scheduled to take place in 2015. It is essential that the Party is not seen as weak on crime or soft on predators. In this case, they are attempting to take a tough stance on the supposed exploitation of women and children in the sex trade.

Many supporters of sex worker rights are disturbed that the Conservative government would play political games with the lives of vulnerable people, especially in light of Robert Pickton’s disturbing legacy. University of Victoria researcher Chris Atchison describes this as a “dire” time for sex workers, arguing that Bill C-36 makes it “functionally impossible for people working in the sex industry to do so without violating the law.” He maintains that should this legislation pass, it will be “impossible for people working in the industry to do so safely.”

If Bill C-36 is passed, it will be years before the law can be overturned, simply because a Charter challenge takes an enormous amount of time and resources to complete. The proceedings leading up to the eventual decision in the Bedford case began back in 2007. Green Party leader Elizabeth May lamented on Twitter that “Women may die before bill [C-36] can be struck down.” She is not alone in her fear that sex workers will bear the burden of a criminalized sex trade while waiting for the laws to be overturned.

Correction: This story as posted read “Every single Member of Parliament from all of the opposition parties—The Liberal Party, The New Democratic Party, and the Green Party—voted against Bill C-36 in the House of Commons on June 16.” It has since been corrected to reflect the vote more accurately: while not every Parliament member voted on the bill, all votes cast by members of those parties voted against it.