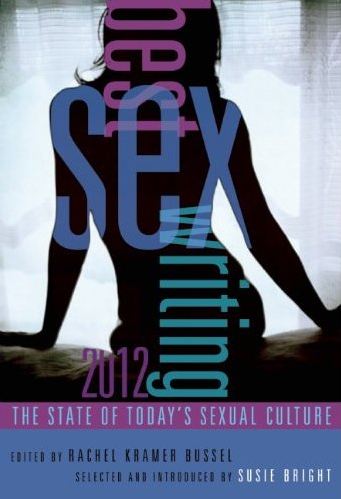 Best Sex Writing 2012: The State of Today’s Sexual Culture is the seventh installment in the series. Started in 2005, the annual compilation of journalism and personal essays on a wide range of sexuality issues are presented as a collective reflection on current sex culture. Whether opposing the various ways in which we criminalize sexuality or extolling one woman’s reawakening after a grievous dormancy, the pieces in the 2012 edition are selected for the poignant ways in which they inform, persuade, and maybe even arouse (who’s to judge?) in a time of great hostility and division. Editors Rachel Kramer Bussel and Susie Bright assert that this is “not a one-handed read” and with every opportunity, they present the book as a multi-faceted study of “the smarter side of sexuality.” This is true, of course, but while there are hundreds of other scholarly accounts of sex, what I find lovely about Best Sex Writing 2012 is that its authors not only cover a huge spectrum of sexual subjects but that they do so not as experts. Most of them are simply passionate people, each with a unique and deeply personal voice. In a sort of parallel to sexuality itself, every chapter is like switching positions, delivering a new sensation, whether it be an exciting or a painful one.

I’ve been having sex for eight years of my life and making my living at it for half that time. As a young woman realizing not only my personal sexuality but also a professional one, it is especially important to me to peel back the layers of this mysterious force that can create—and destroy—so much. Amidst stacks of sex literature, workshops, cultlike community experiments, and my own bedroom, I’ve talked, listened, touched, watched, stroked, screwed and made money in the name of self-actualization and cultural awareness. Best Sex Writing takes us not only into the bedrooms but the courtrooms, workspaces, and streets of protest where others are actualizing themselves, for better and worse, through sexuality. What stories are there to be told, and why is it important that we hear them?

We become privy to such things as a gender-and-mindbending love letter from filmmaker/performance artist/former massage parlor worker Amber Dawn, a sincere look into the double-whammy stigma suffered by Latina transgender drag performers, and a beautiful berating of Melissa Farley for continually shitting in and consequently poisoning the waters of feminism with her anti-sex work agenda. That article, by Thomas Roche (yep, a man), is particularly comforting to any genuine feminists who are familiar with Farley’s neverending bullshit.

Of course, what would any of this be without that sensational firsthand account of a real life call girl? In this case, former escort Tracy Quan speaks neither about her bathtubs of cash nor the horrors of repulsive dates and cruel madams. She instead gives us a very honest insight into the misconception that all escorts aspire to work the high-end market, a potential source of great wealth, but which for her came with the hefty price of little freedom and much boredom. Nothing really sensational about it, merely relatable in its simplicity and a reminder that not every prostitute’s life is so horrific or glamorous that it calls for either a murder or a movie deal.

An easy read but challenging in a greater sense, Best Sex Writing 2012 is a cocktail of first person stories and third person studies, with “fuck yes” moments of completion and clarity as well as dizzying introductions to some new concepts (“sex is not a thing”: epic). You may also run into a few preconceived notions and stereotypes you didn’t even know you held. Above all I appreciate the common thread that ties the whole thing together: safe, consensual and shame-free sexual behavior, whether for recreation or a living, as our human right, something to be exercised responsibly, not regulated dangerously. This collection sends a powerful message that stigma, violence, and serious legal and social repercussions are not exclusive to illegal sex work, and that we as sex-positive folks in a sex-negative culture all have a lot more in common than we think. In order to decrease the pity-giving, pedestal-putting, and dehumanizing of the unknown, which feeds the cycle of ignorance and violence, everyone’s voices—even the most unconventional, unsettling, or unremarkable—must be heard.