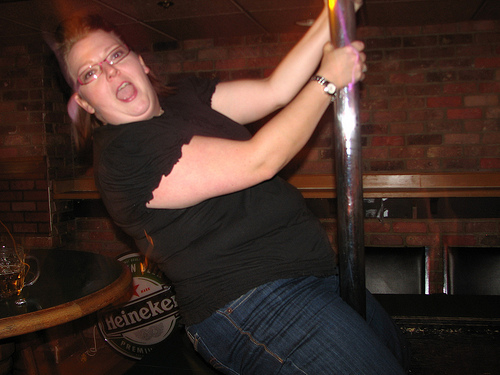 If you work in a strip club, you’ve seen your share of drunk female customers who think every night is amateur night. Sometimes they just try to give their dates a lapdance, and sometimes they jump on stage for an awkward spin around the pole. Clubs handle this in wildly varying ways, from wholehearted encouragement in places where dancers pull them up on stage from the tip rail to booting them out of the door at the earliest onset of Pay Attention to ME Syndrome.

Arrest is pretty uncommon, though! This story out of Clearwater, FL will warm the heart of any dancer who’s had to deal with a bad bachelorette party:

Natalie M. Behnke disrobed at a gentlemen’s club, began dancing and asked customers to give her money, authorities said.

Which would have been fine — except Behnke didn’t work there and she was no exotic dancer.

Staff asked her to leave, but she wouldn’t go, according to an arrest report. She tried to pick a fight with the real dancers at Baby Dolls, 13383 U.S. 19 N, and had to be removed from the club around 11:50 p.m. Tuesday, the report states.

I’ve seen something similar (and funnier. The above story isn’t, really, because it sounds like the woman is homeless and has a long rap sheet). A young co-ed tried to climb on stage several times, and when the owner finally came to kick her out, she tossed a full pint glass at his head. She kept screaming “Do you know who I AM? Do you know who my DAD is?” as they were throwing her out of the club (physically! She fought and tried to brace herself in the doorway!). Just then, the cops pulled up for their nightly check in, and promptly arrested her. Female customers! When they’re bad, they’re the worst.