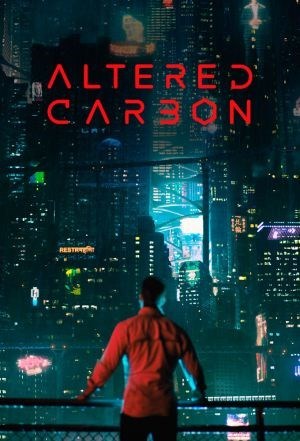 Kovacs is pulled off “ice” 250 years after being arrested and placed in someone else’s sleeve in order to solve the murder of Laurens Bancroft. (This is the term for incarceration in the series’ future. Being “put on ice” means that one’s human consciousness is pulled from a sleeve and put in limbo for the term of one’s sentence.)

From episode one where Kovacs, after being mentally assaulted by hologram ads for brothels, ends up in a strip club with another main character, Detective Ortega (brought to life by an unflinching and talented Martha Higareda) and talks about going to a hotel and renting a “couple hookers,” the sex work angle of the story is clear, heavy-handed, and unrelentingly stigmatizing.

In all these centuries, in thousands of years, there are still sex workers and people still call them “hookers” and “whores.” Nothing has changed in this cyberpunk future where no one dies except the poor and unlucky—and 90% of the unlucky just happen to be exotic dancers, peep show girls, and full-service sex workers. In fact, the entire premise of Altered Carbon, though the show writers and runners do a great job of burying the lede for eight of the 10 first season episodes, is the equivalent of a factory line of murdered full-service sex workers—the murder that the plot hinges on takes place in an upscale snuff brothel servicing the immortal upper class. Kovacs even actually uses the phrase “dead whores.” Twice.

It’s exhausting, really. At the end, discovering the stale plot line behind the convoluted subterfuge of switching sleeves, “Real Death,” and destroyed souls, I was just exhausted. At what point do we get tired of running the same old “murdered and dumped hooker found by the Screw The Rules I’m Doing What’s Right cop” trope? Ah, yes, as usual, no one in the entire world—except these two people—cares about a dead whore. At what point do we realize that this story isn’t a story we should keep telling? At what point in watching James Purefoy murder a woman while raping her should we question why this is a story we keep telling ourselves and other people?

The murder of the sex worker is the entire reason Kovacs is taken off ice and thrown into this crapshow. (Apparently, she doesn’t even deserve to be named by Rei, Kovacs’ incestuous and obsessed sister, played by Dichen Lachman, the Big Bad of season one, during her confession in Episode 9, Rage In Heaven.) Every single review I found online uses the terms “a prostitute” and “prostitutes” when referencing Mary Lou Henchy and her unnamed partner who was murdered by Bancroft. None of these reviewers seems to have blinked an eye at discovering that one of Bancroft’s favorite pastimes is, in Kovacs’ words, “beating whores half to death,” ostensibly because show writers redeem his character with the caveat that he’s “one of the good ones” who will buy girls new and upgraded sleeves if he accidentally kills one of them.

Altered Carbon doesn’t fail to keep up with Every Single Murdered Sex Worker Trope You Can Imagine either—it even makes sure to include the Hooker With The Heart of Gold turned Heroic Seductress: actress Hayley Law brings beaten, tortured, and murdered Lizzie Elliot to life for that. She’s never seen engaging in sex work on camera—it’s only mentioned a few times here and there that she worked in a peep brothel called Jack It Off. It’s never discussed in the show how long she worked there, either. This way both the author and show runners keep you believing poor, broken, literally white-dressed (because otherwise how will you know this is a whore worth saving?) Lizzie is an innocent. She’s not killed by a client, but by Miriam Bancroft. After she finds out Lizzie has become pregnant by Miriam’s philandering husband, Laurens, Miriam beats Lizzie mercilessly, kicking her in the stomach to kill Lizzie’s baby before having her shipped off to be tortured to death.

The notable part of this plotline is how Lizzie goes to Suntouch House, the Bancrofts’ name for their lavish home in the sky, very sad and very, very innocent to tell her sugar daddy/boyfriend Laurens about her pregnancy. The fact that Lizzie is in love with Laurens is woven subtly into the episodes leading up to the big reveal. This isn’t a gritty, street-hardened prostitute we’re presented with, no. Lizzie is innocent and in love—and that’s why she deserves to be saved. The rest of Altered Carbon’s sex workers are happy to be “worthless whores” who offer themselves up to be tortured and killed in any way that will get their immortal johns off. The problem is that this storyline isn’t a problem. The lives of thousands of brutally murdered and tortured prostitutes barely constitute a footnote in this show except to keep the tired plotline trodding along.

Near the end of the season, Lizzie is resleeved into a synth (a synthetic human body that can alter its appearance), changes it to appear as her original self after fighting off and killing a would-be rapist, and goes on a Ninjitsu-fueled murder spree to save her parents and the rest of the poor, lost prostitutes on the floating brothel, Head In The Clouds. She’s never going to be a sex worker again because she came to chew gum, be really wholesome, and kick ass. She’s obviously all out of gum by the time she gets into the synth sleeve.

I’d say it’s heartbreaking, but I’m done being heartbroken. Now? I’m sick and tired of it. I’m tired of lazy writers. Altered Carbon is actually based on a book of the same name with the same stigmatizing, violent storyline about sex workers being murdered by the thousands (do the math: multiple centuries, a literal factory built for killing sex workers). I’m sick of tired tropes that sacrifice women over and over again for being “whores.” How is that futuristic? How is that any different from the last century or two? How is it groundbreaking? Furthermore, how is this Netflix series, rumored to be one of the most expensive television productions in history, anything more than the same violence and poverty porn we’ve seen over and over again?

Because here’s the thing: all of us, sex workers, current and former, have buried friends over and over again. We’ve grieved their deaths, whether it’s death from suicide or the decline in health caused by stress, poverty, and PTSD; or murder by clients or domestic abusers. All of us know of actual experiences—either firsthand or from friends—of robberies, rapes, beatings, and murders during a workday or night. All of us know that the police have historically labeled crimes involving murdered sex workers, displaced and homeless people, and drug users as No Humans Involved. We’re all well aware that cops have taken raping sex workers, suspected victims of sexual exploitation, and now, even teenagers as a perk of their jobs. We’ve all read about Daniel Holtzclaw. It was barely a month ago we discussed finding out that, in 35 states in America, it’s basically legal for police to “have sex” with “people” they’ve detained—who do you think the majority of those “people” are?

We know all this because we’ve lived all of this, right here, right now—not in some futurist, poorly executed, dystopian ripoff of Minority Report where everyone and their little sister has a cell phone embedded in their arm and a video camera in their eye.

Altered Carbon is an absolutely beautiful and terrible show. Matt Biedel believably playing three different characters in three different episodes (a profane Nazi gang member, a hilarious Spanish abuela, and a personality fragmented hitman named Demi The Twin) is an absolute gift and Cliff Chamberlain as a cross-sleeved Ava Elliot, a woman hacker taken off ice and stuffed into a man’s sleeve, gives us a heartrending and beautiful performance. But while the series is, at times, wonderful to watch, it’s also a lazy offering from writing room minds who haven’t stretched themselves past “How violent can we make this hooker’s murder?” when they could have done some real work and come up with a mystery set in a future dystopia that had all parts working together cohesively to be beautiful and simultaneously believable and unbelievable. Perhaps they could have imagined a different future for the poor and marginalized in this world, too. Instead, from cutting up a peep show girl’s body so they can sell her organs on the black market (and making sure to show us a graphic visual of her wide-open, cut up torso) to inducing a “nervous breakdown” (because even here in 2018 we don’t use that terminology anymore) in another sex worker by inserting carnivorous worms into her body during virtual torture, it seems like, in this future, we’re still stuck in the past—and our own horrific present.